Most Realms use the time and date format that the elves of Evylon created, not long after Creation; as the years and days seem similar in every Realm despite the time flux, it is believed that all Realms - planet-wise - are around the same size. There is very little variation between them, and when an 'off' year is discovered in any one Realm, a 'Void Day' is declared, much like Earthrealm's Leap Year.

There are three-hundred days in every year, five months in that year, and sixty days in a month. Five days lay in a week, and twenty hours per day. Each hour is fifty minutes long, with each minute being fifty seconds.

In the Allied Realms - Felnova, Evylon, Millirand, and others who use the 'jaden' currency and hold alliances and trade routes with one another - use an elven calendar created in Evylon in the Year After Creation 12. These months are named after five of the Greater Gods, having been changed by the Dragons of Felnova in the Felnovian year of 106, when the original Evylonian calendar was first adopted.

The original elven names were lost and readily forgotten by the elves, who readily took the help of the dragons in the War of the Dead, around the Evylonian year 3046. Contact was lost with other Realms a thousand years after, though the calendar names were retained, until Queen Verridith rediscovered the Realm and formed the bond with her rider, Arthasraelyn.

First created by the Lord of Death, Makikaze the First, in the first year after the Gods' War. A leader among Lords, he offered his suggestion to the other Lords of Kurai, honoring the gods who had sealed themselves away. As it was adopted by each Kingdom, the Kingdom of Death's prestige grew... until Makikaze was slain in his bed by a Pestilence assassin, fed kirin venom made more potent by the Lord of Pestilence himself.

Ristell has the Calendar of the Suns, and is named after the Sun of the People's distinct solar cycle. Sothet would refer to that solar cycle, with each word referring to part of the Ristellan Zodiac. It was first brought about by the Realm's first Ether, the Spirit of Nirn, a sphinx-dragon cross that eventually died fighting to protect the Underground from the Great Floods.

Time passes in the Realms very differently from world to world. The Void hydra in which the Realms are connected has a very chaotic aura, one that has, over time, affected the Realms it touches individually and uniquely. Some travel much faster than the 'standard' time, while some seem completely unphased. Others may pass through time differently from one point to another, seeming incredibly swift to someone in another Realm. Others progress more quickly or more slowly at a steady rate, unchanging, and remain at this rate indefinitely.

Realms viewed from within the hydra, yet outside of the Realms themselves, will appear to be moving faster or slower to the viewer's eyes. Those within these Realms, however, are unaware of the speed of time's passage, as it seems stable to those within.

FELNOVA|| flux: stable.
Considered stable, as compared to the time that exists around the Void hydra. Unchanging.


Considered stable, as compared to the time that exists around the Void hydra. Unchanging.


Very unstable and highly chaotic. Can change rapidly, with no warning, or not at all. Changes constantly.


Relatively unstable. Generally changes from stable time, to ten years per the normal one. Changes steadily.


Fluctuations occur steadily, at a predictable rate. Fluctuates between five years to one, back to stable. Is steadily increasing now. Changes steadily.


Much slower than stable time. Unchanging.


Considered stable, as compared to the time that exists around the Void hydra. Unchanging.

The Light Realm's and the Dark Realm's time cannot be judged. The various planes of the Spirit Realm are always static, as Felnova is.

Time in the Realms is known to be a loose thing, sometimes tweaked and altered by the will of the gods. However, for the most part, all of the Fiv'ean worlds are similar in that each - no matter the Realm's size in relation to its fellows - are split into eight separate timezones.

While the speed at which time passes for each Realm differs between them, most suns will travel together across their Realm, and thus will not disrupt the day/night cycle. Therefore, scholars have come up with a way to track what time it is in other places across the Realm using the eight zones. They are split into the following: dawn, midmorning, noon, afternoon, dusk, night, midnight, and predawn. Every Realm has names for its specific timezones, though there are never less or more than eight.

However, as stated before, the timezones may be altered via interference by the gods. Primarily, Time may move the day or night ahead or backwards at his will, and Lyfe has been known to rarely move the celestial bodies briefly or permanently, changing the day/night cycle. Other and lesser gods may do similar actions in very small degrees, but this is not common.

On the Current Conditions thread, you will see a section like this for each Realm that's updated regularly: 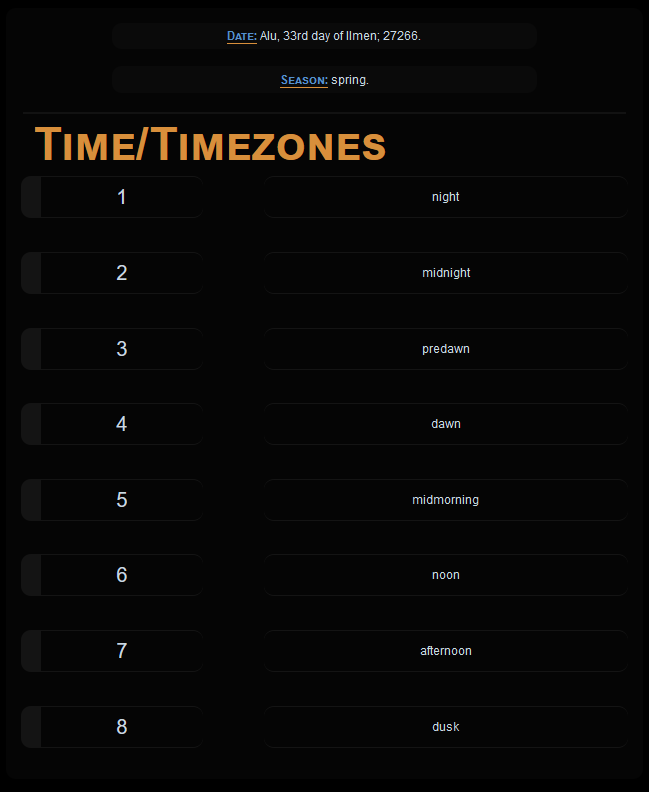 And on each Realm page, you will see the map split into eight sections, and farther down, you can see the names and descriptions of that Realm's timezone!

You can read more about the Realms' timezones on each Realm splash page and on the current conditions thread.