There are two groups spread across the Realms that are known throughout the underground; that of the assassins and that of the thieves. Known as the 'Gem Factions', these two groups came from a singular Guild long ago, and thus their traditions, ranks, and leadership tend to be quite similar to one another. Since the Gemstone Guild's splitting, both Onyx and Ruby Factions have been in contest with one another, ranging from tense rivalry to outright war at any given time.

Both Factions are led by a Council of anywhere from three to fifteen individuals supporting a single leader, called the Lord or Lady of their particular group. They both share the same ranking system, detailed in the chart below.

Crown; master rank: Crown, as in 'crown jewel', is the highest rank held by the Gemstone Factions, and denotes a skilled master of their craft, usually a leader among their particular Faction. Generally, all Council members and Lords/Ladies will have this rank.

Flawless; expert/adept rank: Those that have achieved Flawless rank have been recognized for their skill, and are well respected in their craft. However, most Flawless members have not become leaders, and are not quite as skilled as the Crown.

Gemstone; intermediate rank: Most assassins and thieves hold the rank of Gemstone if they have experience in the craft; these make up the majority of all the Factions' members. Informally called 'gems' by other members.

Rough; beginner rank: New recruits with some experience and skill, but who are still somewhat new to the craft. Informally called the 'uncut' by older members.

Shard; new recruit: The newest recruits are called Shards, and have little to no experience. Informally called 'chips' by older members.

The Ruby Faction is one of thieves; they specialize in many forms of larceny, and can be found in great number across multiple Realms. Its members are split into small gangs of thieves/lesser guilds, and individuals - though these 'loners' may be few and far between. Those in the Ruby are taught the importance of working together, and the value of safety in numbers.

All members of the Ruby Faction have pieces of jewelry set with a single ruby, designating their affiliation. Their color is a definition of rank, and those of greatest skill (the Crown rank in particular) have the kv'naer rune for the word carved somewhere on its surface (a combination of the letter-runes S and L).

Those of high rank and great skill are often considered leaders of the Faction, either in the Council or heads of small bands or gangs; these are those thieves of Crown rank, though a certain few work on their own. Members of the Council have ruby pendants of blood-red, while the Lord or Lady has one that is so dark it appears black in low light. Lesser leaders have red to magenta rubies in their Faction piece of jewelry, while normal members hold low- to mid-quality pink rubies.

The Ruby Faction is well-governed by a respected Council of thieves who have attained the rank of Crown; they are hand chosen by the Lord or Lady, the reigning leader at any given time. This council delegates jobs to Ruby leaders, who may choose to do them or not at will. Recordkeeping is done by these leaders, though these records may be audited at any time by the Council. This Council may also give out special jobs to retrieve items for Councilmembers or the leader, but usually only entrust this to their most skilled thieves.

Each leader (or individual without a group) must pay a tax twice yearly to the Council; how much depends on how lucrative that thief's business has been. Should a thief or their group refuse to pay, they will be bereft of the Ruby's protections and resources. These resources not only include the aforementioned protection, as long as taxes are paid - such as breaking a Ruby member out of jail, providing them with new/fake identities, or keeping law enforcement from capturing them - but access to fences, informants, and smugglers as well.

Armageddon, or Megiddo as he's known, is a Death demon and the Lord of Hell; a Spirit King under the rule of Linath. With a smooth voice and persuasive enough to turn aside a deathcat's rampaging charge, he leads the Ruby faction with - quite literal - steel claws.

Red's former apprentice and now a leader of his own gang. Zunin is a skilled young thief and fighter trained in the ways of the ninja. Schooled in most weapons, though excelling in the use of kunai knives and thin swords, Zunin is best at stealth and covert operations. He's most recently discovered that he has an affinity for fire, and has begun practicing thus; though most of what he does is based around his kunai, marked in kv'naer runes.

He's accompanied by a stallion named Jackal and a wolfhound named Raptor. 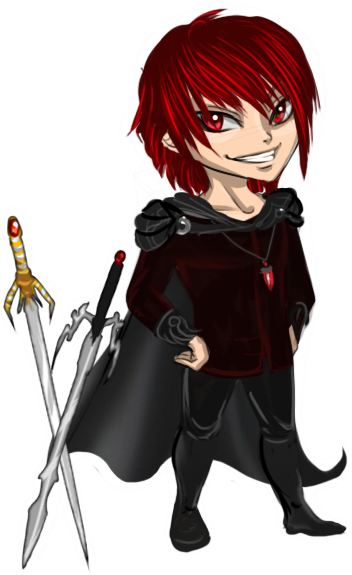 A former knight and man conflicted by not only his nature, but his honor and past. He considers every member of his gang a member of his own family, and would do anything to protect them. Not only is he gifted with the form of a shadowbeast, but rare chaos magic as well. 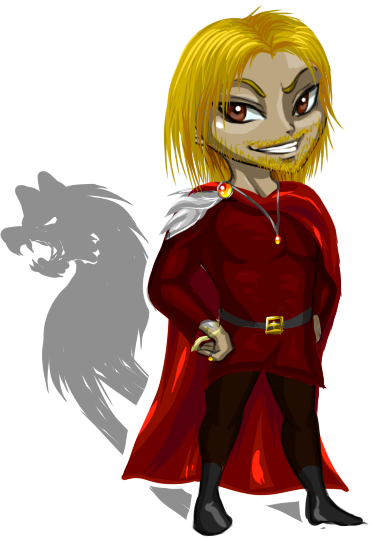 A werewolf fully dedicated to his 'pack', Bird followed Red from knighthood and has been at his side ever since. A bear of a man, he is tall in stature not only in human form - but has the ability to change into a massive, horse-sized, feather-winged werewolf to boot.

Edge is a dragoness who employs her human form far more than her natural, draconic one; she is the mother to Cloud, a half-shadowbeast, and the former princess of Hell. Now, she loyally serves Red and his gang with all the silent skill of a thief, and all the rage her hellfire can muster.

The Onyx Faction is one of assassins; they specialize in contract killings, often for coin or rare, valuable items. Primarily, members of this Faction work alone or in pairs - groups are seen as dangerous, and those that form may draw the ire of law enforcement more often than an assassin that works alone.

Those of Crown rank are given a tattoo with the kv'naer rune for 'skill' (a combination of the letters S and L), along with an unmarked onyx pendant. Master assassins who become members of the Council get pendants engraved with the kv'naer rune for 'leader' (a combination of the letters L and R). Normal members may also keep onyx jewelry, with certain color specifications: the Lord or Lady of the Onyx wears a (pure) white onyx pendant; Council gets (pure) black; and normal members get any other color besides white or black (though white and black may be utilized if banded with other color).

Currently, the Onyx is split into two distinct facets: the Old Onyx, chaotic and arrogant, and the New Onyx, honor-bound and strictly ruled. Old Onyx is slowly fading, while New Onyx rises beneath new, idealistic leaders.

Old Onyx operates on few rules and little leadership. It does not bar any death, against anyone or anything; assassins work for coin and little else. No punishment exists, and they rarely listen to the Onyx Council. Old Onyx members may challenge New for rights to a mark, and violence is commonplace between both groups. However, while instigations by New Onyx against Old are warned against, Old members have no qualms about maiming or murdering their idealistic partners.

On the other side of the coin, New Onyx is tightly led; assassination contracts are often handed from leader to subordinate, though payment is from the client to whatever assassin completes the contract. An overseer marks all jobs, the client, and the assassin who completes them, as well as payment rendered. If a client does not pay, they become the next mark. New Onyx also does not allow the killing of pregnant women or children regardless of why or how much jaden is being paid.

New Onyx members may be differentiated from Old by the engraved mark of a coiled serpent on a cabochon of onyx, worked into anything from a piece of jewelry to the hilt of a dagger. These cabochons follow strictly the color code of the Council; and breaking such a rule may result in severe punishment. However, Old Onyx members may steal or destroy these - in retaliation for what they see as a perversion of their Faction.

An aspiring young assassin who has won a place on the Onyx Faction. Danae specializes in quick and away tactics, throwing knives, and hidden daggers. She speaks very little of her past to anyone, but it has been hinted that 'Danae' is not her true name - and that she is running from something she can't escape from.

Sherni has had many things stolen away from her: her mother, her adoptive parents, and, most recently, her freedom. She now seeks revenge - revenge for what has been taken from her and vengeance for the parents that she never got to grow up with. 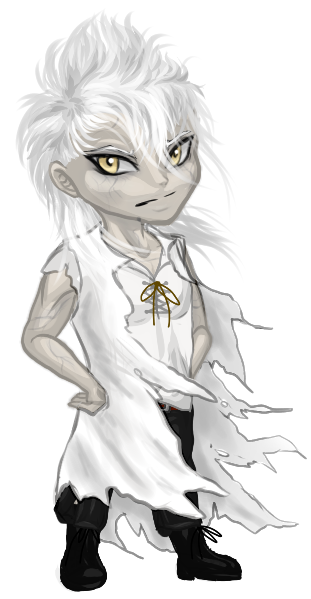 Rhodynn is an unlikely assassin, with his abilities alike to a banshee or a siren. Despite this, he is lethally efficient, and rules his small band within the faction with an iron fist. This demonic leader, though outwardly kinda a jerk, has a soft spot for his pets: Muka, a deaf and fairly skittish Faminehorse, and Skree, a Hokaku spider from the famine kingdom. 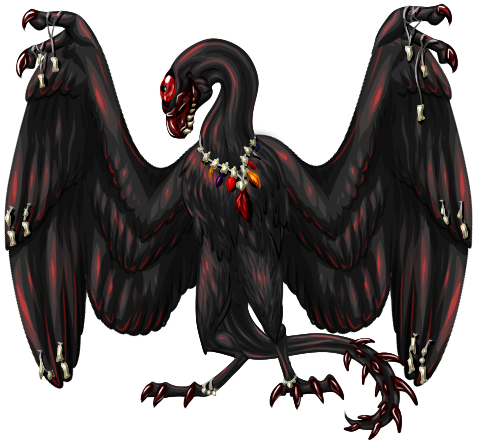 As one from the Death Kingdom, he doesn't truly view his curse as something to get around. Often, his fellow squad members remark on his tendency to use it as an excuse to kill even innocent bystanders. He prefers tooth and talon over poisons and weapons in a fight or assignment. Since he gets easily bored, though, he'll regularly go out on bounty missions with a price for someone's head. Don't get on his bad side; watching you squirm is one of life's small joys.

A loyal and skilled member of the Onyx faction, Silguil is a good ally that is fun to hang out with. As long as you ignore the beard that can reach up to twice his height and is possessed by Tim: A greater ghost who used to be a part of the faction himself... Besides that, he's great! Just ignore Tim!

Elwin is a naturally cautious and curious creature who would like to experiment with various suspicious plants, though only on other people. He doesn't really care who it is, he'll happily poison anyone and record the results for future reference. He's not physically fit for much, but he'll provide poison to anyone willing to help him with his experiments. For the right price, he'll even make a reliable poison to use.