Welcome to BTACD's player group: equine herds! Here you will find official herds of equine species, including but not limited to all variants of unicorn, pegasi, alicorn, and many others. The most prolific of these is the unicorn subtype known as the equus, and the large Duscae Herd.

Largest of the equus herds in any Realm, the Duscae herd has existed since hornless unicorns - ousted from their original herds - began to congregate together many, many ages ago. They are accepting of any equine species, including unicorns, pegasi, and alicorns - though the vast majority of its members are equus. They are very protective of any equine that comes under their wing, of any species big or small. Harm against one member by another member is punishable by physical scarring, exile, or death - often involving both Athen and Reiza as punishers, if not the entire zelda'nn as well. In extreme cases, an errant, criminal equine will be chased down by the zelda'nn and disabled, while the Athen delivers the killing blow.

The Duscae herd travels between Realms seasonally; in the summer and fall, they can be found in the White Plains of Jes're'en in the Realm of Millirand; in the winter and spring, they can be found in the plains of Felnova's country of Vystriana. Generally, at the beginning of each migration, the Reiza and Athen will stay behind until every herd member has traveled to the new Realm via portal, before finally moving through themselves. They often stay until the first snow in Jes're'en, and the end of the spring rains in Felnova.

The entire herd is protected by the zelda'nn, led by the reigning Athen or, rarely, the Ri'valhe. The zelda'nn train for battle from adolescence to adulthood, and often serve the greater majority of their lives unless wounded to the point they can no longer fight. Often, small groups will range far from the herd to scout out safe places for foraging and trade, and these patrols may bring back both visitors to the herd and supplies for the luiyla and seinyn. Those that do enough for the herd to be considered heroes or heroines may be exalted to arthas, along with any children and whatever mate they currently have.

The Reiza leads the Duscae herd almost specifically; the Athen is often her chosen mate, and the leader of the protectors that keep the herd safe from harm. Athens can be challenged, and the challenger then assumes the Athen rank; the old Reiza can either accept the new Athen as her mate, or step down to follow the defeated Athen. The old Reiza chooses an heir before this happens, and in the event of an old Reiza stepping down, the reiza'hann will take the new Athen as her mate and become the new Reiza.

In the event of a cruel or otherwise unfit Athen, the old Reiza and new Reiza will drive the new Athen off, and the new Reiza will resume being heir while the leaders resume their reign. There is, however, no known way to unseat a Reiza, as she is the herd mother, and none dare challenge her reign.


Reiza (Queen);; Herd mother, and absolute ruler of the entire Duscae herd. Is generally mate to the Athen, though two mated Reizas have been reported in the past. Is considered the lead mare/boss mare and her word is law, in all matters of political and societal bearing. Reizas do not need an Athen to lead, and rarely may take a mate who is not of rank, though this is highly unusual. Called the 'Queen' by those not belonging to Duscae.


Reiza'hann (Queen's Heir);; Sometimes simply referred to as the 'ann'. Chosen by the reigning Reiza to become the next Reiza should an Athen be challenged and lose. Must remain mateless, lest she give up her heir status; she is often trained for many years by the Reiza, and will take the new Athen as mate if the old Reiza steps down to follow her defeated mate. All reiza'hann are chosen from arthas. Called the 'Queen's heir' by those not belonging to Duscae.

Athen (King);; Protector of the herd and leader of the zelda'nn, as well as anything having to do with defense of land and lives. Is mated to the reigning Reiza, and is often chosen through challenging, and winning, against the last Athen. Called the 'King' by those not belonging to Duscae; the rank title is a shortened version of the elven word 'athenus'.

Ri'valhe/Ri'valhia (Highlord/Highlady);; Highly respected advisors for both the Reiza and the Athen. Called the 'Highlord' and 'Highlady'' by those not belonging to Duscae.

Arthas (Lords and Ladies; Nobles);; The arthas are members of the herd that are of what's considered royal blood; gifted equines that have gained respect in a multitude of ways, from former Reizas and Athens, former Ri'valhes and Ri'valhias, to heroes and heroines of the herd and their assorted children. Arthas are often called valhe (lords) and valhia (ladies), especially by outsiders, as arthas is a very broad term. The reiza'hann is always chosen from the arthas' ranks. Called 'nobles' by those not belonging to Duscae.

Elra (Seer/Shaman);; A seer and head healer often referred to as the 'dreamspeaker' of the herd, though the formal rank is known as Elra. Almost always a mare, and blessed with dreams thought to be straight from the mouth of L'zayn. The Elra is the strongest of the herd's healers, and is not only responsible for training other healers, but also maintaining and passing down the oral history of the herd. Called the 'seer' by those not belonging to Duscae.


Elra'hann (Seer heir);; A filly (or in rare cases, a colt) chosen before their first year to be trained as the Elra's replacement. Never strays far from the Elra's side. Called the 'seer's apprentice' by those not belonging to Duscae.
Luiyla (healers);; Any members of the Duscae herd who have healing abilities, and have been taken in by the Elra to be trained in the healing arts. Called 'healers' by those not belonging to Duscae.

Seinyn (Elders);; Older equines that can no longer perform their previous duties. Often, these will be tended to by foals and yearlings, and their advice and wisdom are respected by the entire herd. Called 'elders' by those not belonging to Duscae.

Zelda'nn (warriors);; The protectors under the Athen that keep other herd members from harm. Some zelda'nn will also be of artha rank, but dedicate themselves to the art of war. These zelda'nn are all led by the leading stallion, most often the Athen or - if there is no reigning Athen, then the currently reigning Ri'valhe. Called simply 'warriors' by those not belonging to Duscae.

Herd Members;; Any unranked equine of any age belonging to the Duscae herd.

Foals;; Herd members that are still considered children, from birth to adolescence; this also includes yearlings, which are those who have reached their first year of age. 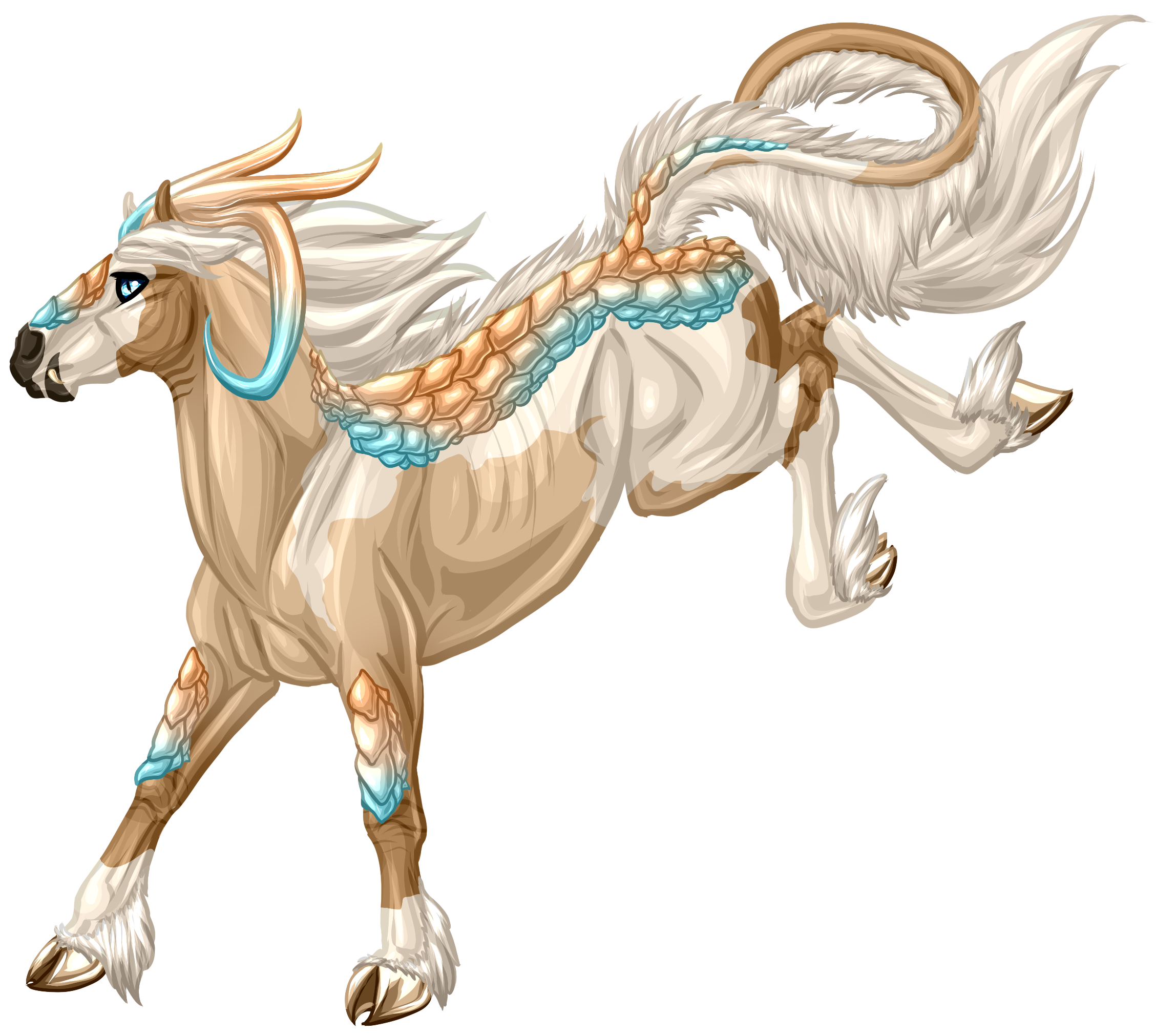 A flighty and rather ditsy filly, born into royalty as the daughter of a heroic Athen, Maeya is an unusual equus with some affinity for light. She has a very short attention span, and loves to ramble on about subjects most either don't care enough about or know nothing of, even when all listeners have since walked away. She's bubbly and sweet-natured, though has no real ambitions beyond deciding what's for breakfast the next morning. 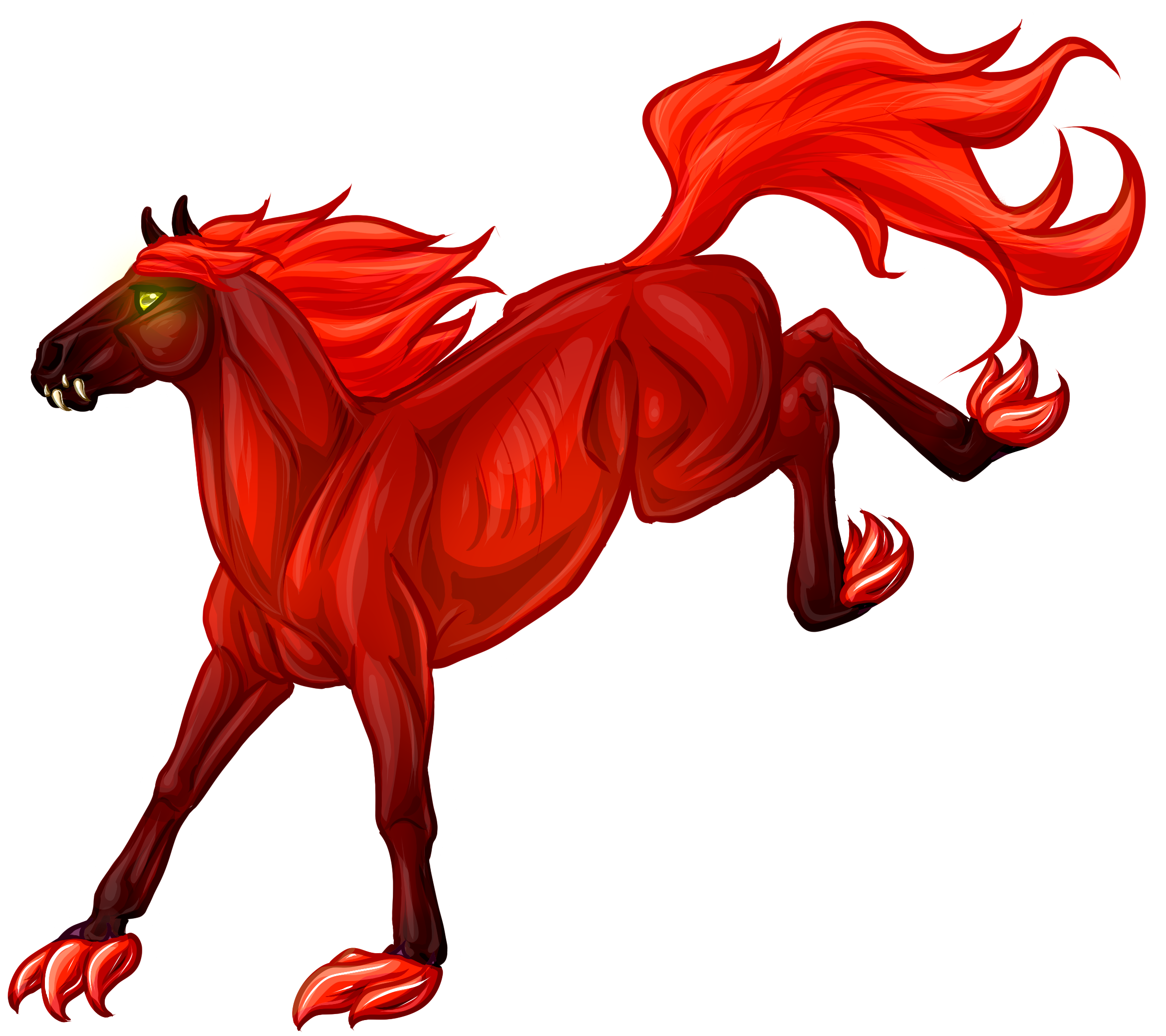 Along with his daughters, Anor is all that remains of a herd of equus lost to Scylla's crazed wrath. Massive and aggressive, his carnivorous nature sets him apart from others of his kind. He is slow to trust, and slow to give his full allegiance, but he is nonetheless a reliable ally. He tends to keep his distance from the rest of the herd, preferring to exist on the fringe and keep an eye out for predators that might end up being his prey.

Aurum is the levelheaded daughter of Anor, and is set apart along with her sisters by her carnivorous nature. The remains of a herd destroyed by Scylla's wrath, then resettling in the herd, Aurum makes herself useful as best she can, and tries to keep her siblings in line as best she possibly can manage. Close to her father, you can see this young equus hanging out around her sisters, or hunting for the prey which she needs to sustain herself with her father.

“Hot-headed” and “temperamental” may be two words often used to describe Thaurynn as she is prone to many fits of rage. However, “charming” is the one used the most; Thaurynn knows how to appeal to others' desires. Never one to back down from a confrontation, she is also extremely stubborn, willing to defend her family, as well as any others who earn her friendship, to the very end. 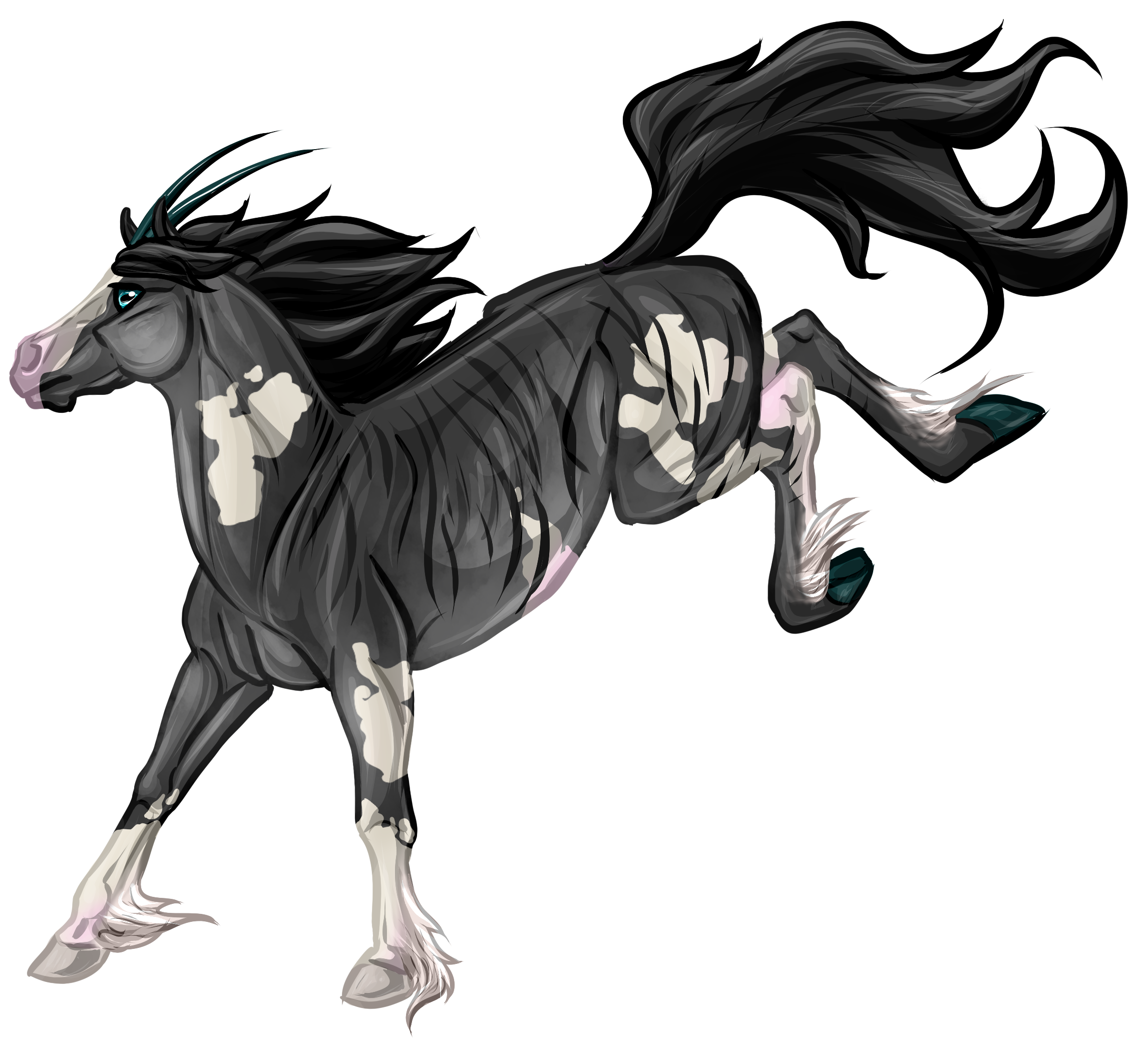 One of Duscae's newest members, Drana is an equus who began as a regular horse; granted sentience by the gods, she set out on a quest to find more like her, and discovered the herd she calls home today. Though still considered a foal, she hopes to someday rise into the ranks of the arthas, and even to Reiza herself. 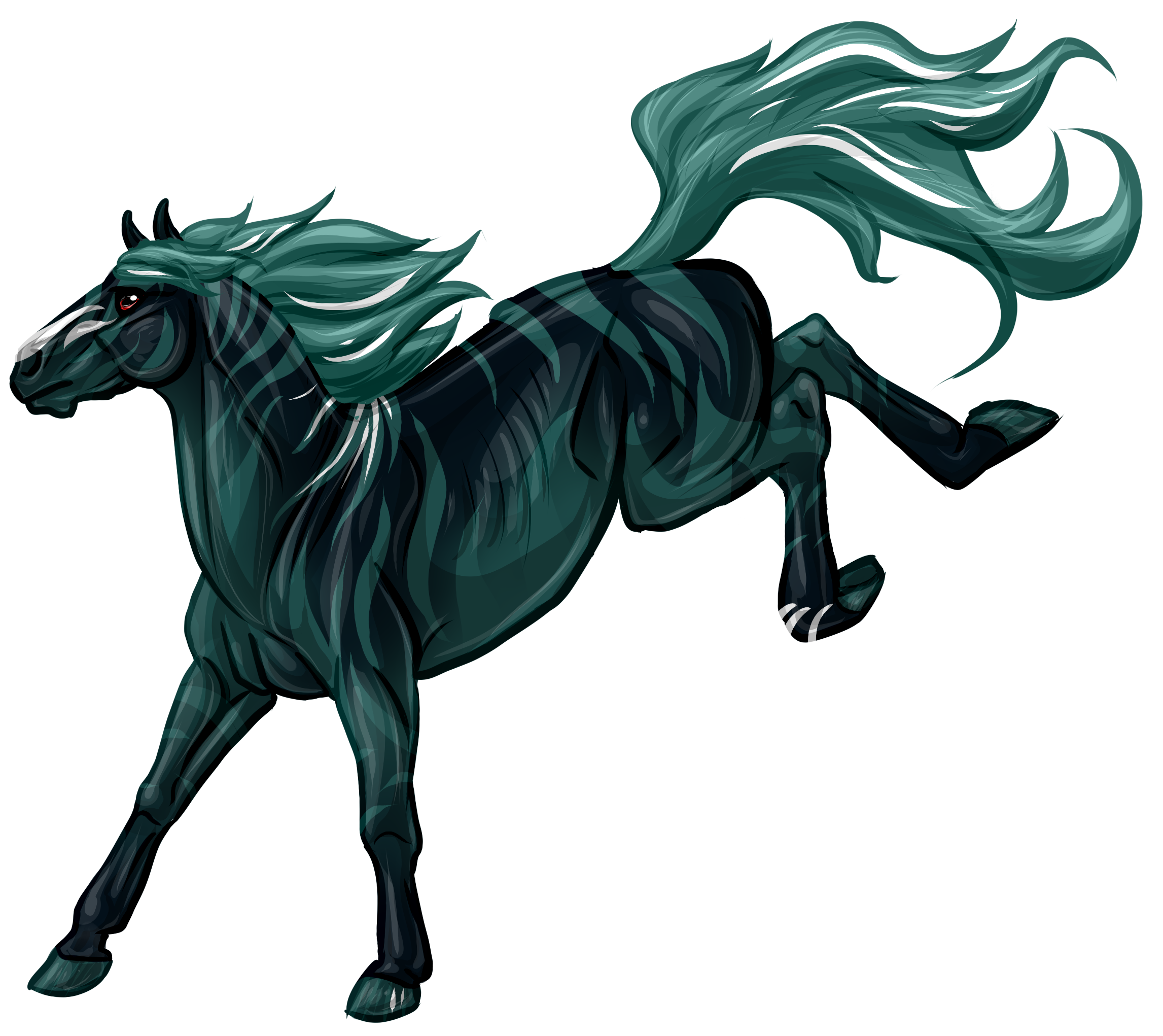 Something of an asshole, this young stud has a lot to prove. He's been slotted to become a healer, but he covets the rank of Arthas, and has become determined to do anything to get it. However, he has little to no offensive skills, and leaves crystals in his hoofprints... a subject of much teasing among his favored group of friends.