By Tooth And Claw Dragons
World of Ristell 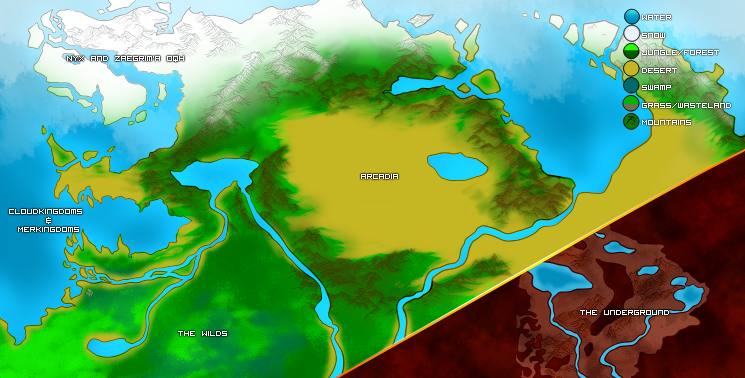 Click on any of the names to be taken to the page of that continent.

Rituals for this Realm

Holidays for this Realm

Known as the Realm of Ice and Fire, Ristell is as diverse a place as can be found in the Fiv'ean Realms. From the blazing Arcadia Desert to the frigid northlands of Nyx and steamy southern Wilds, the surface is a harsh, unforgiving place, while the ever-dark Underground is more suitable for most races not native to Ristell.

Here is a listing of factions, native species, fauna and flora that can commonly be found in this Realm. Keep in mind, however, that these are not the only things that may be found within Ristell; different groups may travel, many species can be found abroad, and flora/fauna can be transferred with ease.

The great Markers of Ristell are hidden well upon the Realm, and serve to not only connect the Realm to the great Void Hydra, but to balance Noctis as well.

Guardian: Djedhor; ancient divine sphinx with great power over wind and earth.
Location: Deep in the Arcadia Desert, well-hidden by sandstorms. Djedhor can strengthen these sandstorms to the point where they can shred anyone unfortunate enough to get caught in them.

Guardian: Charna, an anu sphinx with great power over the Dark.
Location: Deep in the Underground, far removed from the more habitable regions of the great caverns. A labyrinthine series of tunnels extend even deeper, and if one follows the right path, the Marker can be found within.

Guardian: Ymir, a mighty iahake with great power over ice.
Location: On one of the Northern Isles, concealed beneath a sheet of ice. Piercing winter winds and a perilous climb deter all but the most foolhardy.

Guardian: Mor'la, the massive, ancient d'jini that sleeps atop the sunken Marker.
Location: Deep within the Wilds, beneath the massive form of a great elemental-infused d'jini who has long been overgrown with plant life. She no longer looks to be a d'jini at all, simply a softly-shuddering hill hidden amongst the trees. 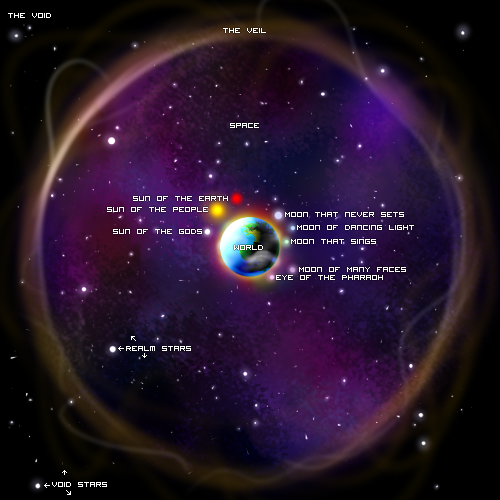 Ristell Constellations click on the link above to learn about this Realm's constellations!

Ristell is a chaotic Realm with an incredible array of vastly different and unique Realm stars of varying colors, shapes, and sizes. Void stars can be seen clearly on some nights, and be completely absent in others, depending on the light of the suns and moons.

The only Realm in this Void hydra to sport quite so many celestial bodies, Ristell has no fewer than three suns and five moons. The suns are almost always in the sky at the same time; one is the largest, bright gold, and is called the Sun of the People. The second is a deep scarlet, throwing conflicting red rays down upon the earth, and is named the Sun of the Earth. The last is a bright white and is quite small comparably, and is known as the Sun of the Gods.

The five moons are all unique, and different from one another. Two, often referred to as the twins, orbit one another; they are both shades of bluish teal, and are called the Moon of Dancing Light and the Moon That Sings respectively. The smallest moon is a serene pink-white, and is called the Eye of the Pharaoh. The second largest moon, colored a similar light purple, is called the Moon of Many Faces, and is known to do two laps around the world in the time that the Eye may make one. The last, and largest, moon is the Moon That Never Sets, a bright white globe that has a static place above the Realm, unmoving and always within sight, oddly from wherever on the Realm’s surface one might be.

While Ristell’s Veil might be thin, like to its sister Realm Noctis, the nebula inside can vary greatly, swirling in dancing colors. While most of the nebulae in the space Ristell has within its Sphere is tinted purples and pinks, there are also swaths of black that resemble the Nothing outside, a clear view of the Void that has been theorized to be holes in the Veil that one can see through with ease. Whether or not this is true, it has yet to be found.

commonly found;; Most common are trees and plants found in temperate climates, together with a large variety of herbs found growing in forests or on hillsides.
rarely found;; Tropical plants and plants indigenous to colder climates are less common, but they can be found in more remote regions by those who know where to look.
doesn't exist;; Aside from those plants native to Kurai, all plants found in the Realms can be found on Ristell.

The mountains of Arcadia provide great mineral wealth to the kingdom, and paints and dyes crafted from various materials found in the desert are in high demand among artists from other Realms. From Nyx comes special ice-crafted weapons and armor that won't melt unless exposed to powerful, magical flames. A good portion of Zaegrim'a Oqh's economy is supplemented by the trading of nzani darksteel crafts, weapons, and architectural services, though mentors for combat or knowledge are also occasionally sought after. The Underground is home to skilled stonemasons who often sell their wares, or hire themselves out.

The currency in Ristell is called the sol, and is equivalent to the Allied Realms' jaden in worth and basic value. They come in four denominations, much like jaden: the bronze coin, the silver coin, the gold coin, and the platinum coin.

Average prices for common objects are listed below:

While all the gods of Ristell are honored by every nation, each nation has its own ideas on which god is most deserving of honor and praise. Arcadia looks to Azcen, and holds him in higher regard than the others. Nyx hols Nirni in the highest regard. The Merfolk and the rest of the denizens of the sea honor Meryll first and foremost. The peoples of the sky cities hold Zephyro in greatest esteem. The Dwarves of Dun Modon, upon Draiyd's mighty back, worship the great goat above all, as do the peoples of the Underground.

Jinun, the lost god of insanity, is worshipped by secret cults and feared by all. He is a chaotic and savage god, and those that hold him in high regard are often seen as the disgraced and insane. They keep their worship hidden, and their dark priests are rare and do not often venture to preach their religion aloud.

Zaegrim'a Oqh worships no Ristellan god, but a former Ether of Ristell called Zaegrim. By nzani law, they do not speak of other religions, and consider speaking directly of another religion a grave insult to their race. The name of a religion to come up in casual conversation is tolerated, but to go beyond that is blasphemy. Other gods, such as the Greaters and the Ristellan gods, are recognized as divine beings, but are regarded as inferior to Zaegrim in every way.

Arcadia is the foremost power upon Ristell, both in wealth and in military power. In the distant past, a short but violent war was fought between Arcadia and Nyx, during which Arcadia's power and authority were decisively proven. Since then, Nyx has been a staunch ally of Arcadia, with the Imperial Household making several annual state visits to their southern neighbors. While the Merfolk kingdom of Tempest doesn't have as close a relationship with Arcadia, they acknowledge the desert kingdom's sovereignty over the surface.

Far to the north, the country of Zaegrim'a Oqh is led by Zaegrim's Heart. Male or female, the Heart is not only the political ruler, but is also the religious and high military leader as well. The Heart is almost always beloved by all nzani, and is rarely met with disdain or despised.

The Dwarves of Dun Modon are viewed with caution verging on distrust, due to their cultural inclination to claim anywhere Draiyd has previously slept as their own, sacred territory. This had led to several short but brutal wars between them and the rest of the surface of Ristell, leaving relations tense.

The Underground staunchly refuses to acknowledge Arcadia's authority, keeping to their own confederacy of subterranean cities. This has led to Arcadia and the Underground waging war upon each other several times in the past. While neither has ever had a clear advantage, neither side is willing to compromise on the issue. Relations tend to vary, but are generally tense.

Arcadia fields a powerful army primarily made up of sol'teran soldiers primarily from the Blessed Houses arrayed as infantry, cavalry, and archers. Sphinx often add their magical might to the army's ranks, and members of the Royal Family are frequently trained to fill high military positions. Accustomed to the hardships of the desert, these professional soldiers are well-trained, tough troops.

The Empire of Nyx, when at war, calls up levies of local militias bolstered by professional soldiers sworn to various noble houses. While these household troops are well armored and trained, the levies are generally given spears, long knives, large shields, and little else, though most keep leather armor on hand.

The merfolk of Tempest generally make use of raiding parties to harass land-dwellers, relying on the ocean to shield them from serious invasion or wide-spread retaliation. Spears, nets, and poisonous darts are their most common weapons of choice.

The Underground keeps a well-trained militia on standby should another war with Arcadia erupt. These soldiers train frequently before returning to their normal jobs, although most can be called up swiftly if need be. Each city also maintains a full-time, professional garrison.