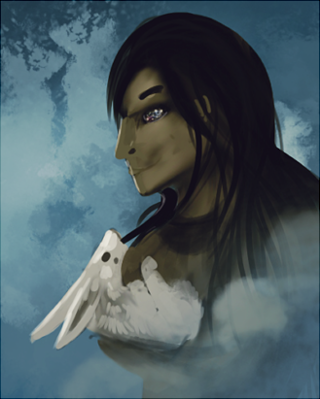 Liniah are a diminutive, slender race with pupilless eyes that glimmer like miniature galaxies, known to have once been celestial animals that roamed the skies above Ristell. Their bodies, though they appear truly physical, are made of stardust and return to the heavens above when they die. The liniah have unique familiars, given form by the Ristellan lesser goddess Nirni, crafted from a liniah's soul and starlight.

Death Due to liniah nature, liniah - and nin - deaths are unlike any other species. Liniah belong to Nirni, body and soul; their bodies are made of stardust, and their souls of starlight. Upon death, a liniah's body will dissolve into stardust as the nin reverts to shimmering light. A liniah's soul - what was once the nin - will serve their goddess for a brief period of time as messengers between the gods and mortals of Ristell, before being released into the Soulplane.

Nin The nin is a liniah's soul in animal form; they are crafted of starlight given physical bodies, and house a liniah's spirit for the duration of their life. They may develop separate entities and personalities, though their liniah will always have influence and control over them, no matter how different opinions may be. A nin can be any kind of animal, and the size and type of animal is often tied to how strong their soul is at birth. A nin does not change or grow extravagantly during a liniah's lifetime, but may be influenced by various events that may grant them odd features and small appearance changes. Touching another nin without permission is seen as a grave crime, and is punished by liniah culture.

Nin Death Killing a nin is an offense answered with death; any liniah that loses their nin will degrade into insanity and become Cursed, eventually dying. They will change into forms that resemble monstrous versions of their nin, and will often burst into stardust when their energy runs out.

Reproduction Liniah couples may breed with one another to create viable offspring; however, if the pairing is not blessed by Nirni, the child will be stillborn, as the goddess must grant her star-energy for the liniah to live. Pairbonding and marriage rituals are paramount in liniah culture, and even true-bonded pairs often do not have many children. Those children that are born are considered sacred, and are well protected until they come of age. Liniah hybrids are possible, but rare; if a liniah woman carries a hybrid child, she may become very ill, and often may die before the child is born, or in childbirth.

Star Sickness Liniah may be afflicted by something known as the oess'niieni - or 'sickness of stars'. This happens when a liniah's stardust-formed body is corrupted by dark magic, resulting in loss of function. To save a liniah afflicted with oess'niieni, their nin must share their soul between them, creating a Soulbound. There is no cure, or reversal, through any magical or natural means.

While the liniah are omnivores, they only rarely eat meat of any kind. When they do hunt, they will never hunt rabbits or hares out of respect for Nirni, or any animal that shares the same shape as their nin.

Appearance Liniah are a diminutive, delicately-built humanoid race that are known to be nearly weightless, with bodies crafted of sheer starlight. Their skin can be of any color, and may shimmer with a faint iridescence in the light; hair color can range from natural tones to unnatural, and is often worn long. If one looks close enough into a liniah's eyes, it's said that they resemble miniature galaxies, and a thousand sparkling stars can glimmer in their depths. A liniah will always be accompanied by their soul-animal, called 'nin'.

Despite being settled in the icy north of Ristell, liniah wear light and airy clothing, such as shimmering silks and elven vilam. Most liniah wear some kind of gem jewelry, bought or bartered from other species, and fashioned by liniah craftsmasters. Earrings are very common, as well as multiple piercings in the same or both ears; necklaces with many small gems, multiple-gemstone bracelets, anklets, and armlets are also common. Usually, liniah do not wear armor.

Culture Liniah are a peaceful and highly religious people dedicated to the goddess Nirni of Ristell. Those that wander beyond Ristell may come to worship other gods of the cosmos, including Lyfe and Nebrielas, but Nirni holds their hearts no matter the Realm they choose to reside in. Rituals and celebrations often include rabbit motifs and shrines to Nirni, and blessings from the rabbit goddess are sought for many different things. Nin are sacred in liniah culture due to them being liniah souls, and to touch a nin without permission can be severely punished. Rabbits are somewhat prolific in liniah cities, and it is against the law to kill or hurt one, as it's seen as a sin against their goddess.

Pairbonding between liniah is characterized by a ceremony set under the moons, on a clear night when the light is almost as bright as day; necklaces signifying their pairbonding are exchanged, and a celebration is held that lasts until the following dawn. Nirni's blessing for children is often sought after such pairbonding ceremonies to avoid stillborns, and a successful birth is smiled upon by the goddess herself.

Abilities Being of starlight and stardust, liniah and their nin are immune to multiple types of elemental magic, and it's known that heat and cold do not bother them. They cannot burn or freeze, though physical elements - such as earth or wind - can harm them physically. Darkness magic is utterly toxic to any liniah, and can result in star-sickness, if it does not kill them outright. They are very physically weak, though most liniah have very strong magical capabilities, both elemental and not. No natural liniah may harness shadow magic, and those that try often are either driven mad or end up with their own destruction.

In the early days of Ristell, Nirni had fashioned small creatures made of pure starlight that took the form of various animals, and these starry spirit animals dwelt with her among the stars. For many centuries, they were content to dwell there, but, as they gazed down at the Realm below, many of them began to wish they could live among the races beneath the sky, and experience Ristell as other creatures did.

Eventually, one of their number, knowing it would mean sacrificing her immortality, and possibly bring Nirni’s wrath upon her, willingly lift the starry heavens, and set foot in the northern reaches of Ristell. It wasn’t long before the rest of the starry creatures joined the first. Dismayed by what she felt was a desertion, Nirni watched from the heavens as her creations explored their new home.

But she felt no anger. Her creations looked so happy, roaming the icy northlands, that she began to understand it wasn’t herself they had abandoned, it was their lives among the stars. She set foot on Ristell herself, and gently called her starry creations to herself. They answered her summons, rather fearfully at first, but when they saw no anger or judgment in Nirni’s eyes, they lost their fear.

Nirni called the first to depart the starry heavens to her side, and the two spoke as the rabbit goddess led her people on a merry race across the snowy fields. As they spoke, the spirit creature’s stardust body shifted into a humanoid form, her dusky skin glowing faintly like a twilight sky while her eyes glittered with a cosmic display, for within her eyes one could see a mass of stars. Beside the first liniah ran a rabbit of pure starlight; her nin, her very soul, given form to be a companion to her, and a reminder of her connection to Nirni.

After the first liniah took shape, the rest of the starry creatures following behind her and Nirni likewise began to take on similar shapes, though each was likewise accompanied by a small, starry animal. It wasn’t until Nirni stopped atop an icy hill that the liniah realized the change that had been wrought upon them. When they did, they danced with joy, and sang praises to Nirni, for now they were a true part of Ristell, capable of building their own civilization. Nirni danced with them for a time, then vanished into the sky in a sudden burst of starlight, promising her new creations that their souls would return to her after their deaths, before passing over the Veil to the Spirit Realms.

They set about building cities for themselves, and founded the empire of Nyx, forever holding true to their deep reverence for Nirni. As time passed, they began to honor the other gods of Ristell as well, but never to the same extent as their devotion to the rabbit goddess.

This Ancient First was a liniah who resembled the celestial creature she would become after death, given corporeal form. Her skin was an iridescent violet and studded with gems that gleamed brightly under starlight. Immune to heat or cold, hunger or thirst, she nursed a peculiar love of death, and would often preside over the newly fallen to praise their reunion with Nirni.

These liniah have formed a deep, inseparable bond with their nin, and share no special physical attributes to attest to this, save that their eyes glow with the same color. A Soulbound is created when a liniah's body is unable to move without sharing the nin's soul, and this may happen due to something known as 'oess'niieni', or sickness of stars.

While it is possible for the two bodies to travel miles away from one another, this is risky, since one body will be inactive, and vulnerable to harm. The Soulbound typically use mindspeech to communicate. So deep is their bond that if liniah and nin were to ever have their connection broken, they would both die. Soulbound liniah are also unable to live long lives, due to the strain their souls put on their bodies when not held by the nin.