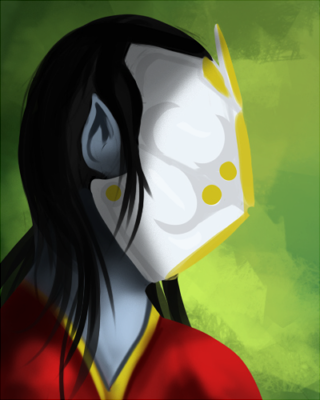 The Zaegrim'a Nzani, often simply called nzani, are a race of slender humanoids that dwell in northwestern Ristell. They wear specially-crafted masks and have a culture deeply set within a religion that honors a former Ristellan Ether as a god, and have great abilities in speed and agility, as well as metalweaving and weaponsmithing.

Location Found:: Primarily northwestern Ristell, though can be found elsewhere.

Council of Twelve The Council of Twelve is a group of elected councilors directly below the Heart and Avatar. They act both as advisors and the second tier of legislation for nzani political affairs. When a law voted on by the Council of Twenty is passed, it is presented to the Twelve, who then proceed to pass or deny the decree themselves. If it is denied, the law is returned to the Twenty for adjustment. If it is passed, it moves on to the Heart - who accepts or returns it to the Twelve for another look.

Council of Twenty The Council of Twenty is a group of elected councilors directly below the Council of Twelve. The Twenty are the political officials who take the concerns and desires of the populace and discuss issuing decrees that can resolve such matters. These matters are resolved with a vote to pass or deny. If passed, the law is moved onto the Council of Twelve for another round of votes. If it is denied, said decree is either discussed again for adjustment or discarded entirely based on another vote.

Hybrids The nzani are quite capable of pairing and procreating with other species - most notably humans, elves, or other species with similar humanoid physiology. These offspring often inherit certain traits from their nzani parents, such as improved reflexes and agility. Hybrids of other races and nzani may don masks if they choose to stay in Zaegrim'a Nzani settlements; however, those that do not often shun them, and go out into the world without.

Masks - Sight and Voice Nzani masks are enchanted, and serve many purposes; some of these enchantments allow for the nzani to see and speak without trouble. The mask as a whole is enchanted to grant one-way vision so that the wearer can see through it, but their face remains hidden to onlookers; likewise, the mask is spelled to allow them to speak clearly, though their voice is given a somewhat reverberating distortion effect when speaking. This distortion does not make it difficult to understand one's speech, but it does make one sound rather otherworldly.

Masks - Historical To date, only five of the first crafted masks are still worn with great recognition befallen to those who claimed them; these masks are never necessarily worn by people in important positions, but the stories they represent span centuries, and they are considered great artifacts and, therefore, are treated with great care and respect.

Zaegrim's Avatar The military, called the Inquisition, is led absolutely by Zaegrim's Heart. However, the strongest warrior in Zaegrim'a Oqh is chosen as a second in command, known as "Zaegrim's Avatar". Revered for their might and majesty, the Avatar is viewed as Zaegrim given flesh, as he had deemed his "host" worthy to grant him the chance to once more experience the world through them.

The Zaegrim'a nzani are omnivores, though due to their icy homeland, they typically have diets heavier in meat and fish than the other denizens of Ristell. Due to the masks they wear, nzani typically eat foods prepared specially into small portions unless they are able to dine among close family and friends where they can remove their masks.

Appearance Nzani are humanoid, and resemble elves in basic body shape and physical features. They are slender and graceful, with thin, angular facial features, and their ears are very slightly pointed. Most nzani are quite athletic and dextrous - making up in speed and agility what they lack in sturdiness and constitution. Skin color is generally a light gray with a slight tinge of blue, but a light pale blue is also common. Darker tones of gray and blue are possible, though they are not as common as the typical pale tones; others may have skin that is very nearly white.

Most nzani have a base hair color of black, and always have a second color - dark shades of the rest of the color spectrum - for a two-tone gradient effect. White hair is less common, and usually denotes exceptional magical capabilities in the future. Eyes tend to be silver or deep shades of other colors; amber or a bright gold are also common. Rings of dark red or silver envelop the outer edge of the irises.

However, all nzani have their faces covered with unique, intricate masks. The Zaegrim'a Nzani believe that an individual's face should only be seen by family, lovers, or close friends. As such, they wear outlandish and ornate headdresses with attachable face masks that can cover various amounts of the face. The design and amount of coverage of these masks is quite varied, and differs by individual. However, designs and decorations on the mask often serve as telltale signs of one's position - military or political. Masks of those in the nzani military, called the Inquisition, are often sharp and angular, while those who have advancements in politics will be smoother and decorated with inlaid crystal.

The nzani are given their masks at the age of sixteen; it is seen as a coming-of-age gift to the new adolescent, and widely respected by nzani culture. A nzani child about to receive his or her mask is allowed to work with the Zaetchyn - or Maskworker - who then crafts the mask to the desired specifications. As a result, it is very rare that two masks every look alike. The mask a child dons at age sixteen stays with them for life, as they are built to be durable to last many years, and are enchanted to grow and change as the individual that wears them does.. Sometimes, masks of particular renown are passed down generations, however, this only happens if a nzani's child accepts this honor to uphold the mask's legacy.

Culture Nearly all Zaegrim'a Nzani are dedicated to their perceived deity, Zaegrim, a former Ristellan Ether from many centuries ago. In nzani culture, it is considered treason and blasphemy to accept any other deities (even the Greater Gods, or the gods of Ristell), and they do not let any other religion influence them beyond similar values they may share.

As a nzani lives their life, the decisions they make and the accomplishments they manage give cause to decorate their cultural masks. The engravings one puts on their mask weaves a tale of their life. For example, one who serves a military career with distinction might have long, angled etchings along the outer edges of the mask; someone in politics could have more rounded circular engravings. The more widespread and intricate the decorations on the mask, the longer the story it tells. Chains and crystal beads are sometimes implanted or attached to the masks to add some flair and originality, though these usually have nothing to do with rank. Of course, due to the pride each nzani has for their mask, these decorations are never done haphazardly, and are usually symmetrical or made with great thought beforehand.

The nzani cherish both true pairbonding as well as marriage, and traditionally hold ceremonies to acknowledge and honor those who pair with one another. These ceremonies are public, and anyone who wishes to attend may do so. These ceremonies generally include a great amount of celebrations that involve feasting and competitions in the new couple's honor. The most famous of such marriages are almost always the pairbonds between Zaegrim's Heart and Zaegrim's Avatar - the military and political leaders of nzani culture. It is believed that through the relationship between these two strong individuals, Zaegrim'a Oqh as a whole can become stronger. Regardless of the gender of both leaders, they are married traditionally; whether or not they love each other is irrelevant, but true pairbonds through love is a very common occurrence.

Abilities The nzani are unusually quick and agile - capable of superior reflexes and acrobatics. There are many skilled in magic, but all are relatively fragile physically, and rely on their speed to overcome obstacles.

However, the nzani are renowned for its ability to refine darkmetal and obsidian into very sturdy and beautiful works of architecture, craft, and weaponry. Many metalweavers and earth-element craftsmen and warriors can be found within Zaegrim'a Oqh, both in the Inquisition and the commonfolk. Such abilities are usually seen at a very young age, and can be tempered and refined from childhood on.

Though many humans who migrated to Ristell ended up moving into the Underground to escape the harsh environments on the Realm’s surface, there were some who refused to forego life beneath the suns and moons. Instead, they traveled into the frozen north, calling themselves Tsahsi, and establishing a small kingdom by the western reaches of the north. The Tsahsi were distinctly short and slender-framed people, allowing them to survive the harsh cold where a larger people might struggle more.

Zaegrim, Ristell’s then-Ether Spirit, watched them, and their struggles to survive in that harsh environment. He was convinced there was a way to make Ristell a great Realm, even in the frozen northlands, but he was uncertain how. He called upon Time, and asked the great god for guidance in this endeavor. Time responded by directing Zaegrim to a distant Realm, telling the Ether of a people there who would play an important part in Ristell’s future.

This far-distant Realm, Ave'lan'sea, was home to a people who called themselves Styr-Asstiki, who were rebelling against a tyrannical empire. Zaegrim promised them a new home, if they would but accompany him, and offered to lead them to Ristell. There was much debate among the Styr-Asstiki, but eventually they agreed, knowing the empire would never allow them to live in peace otherwise.

Zaegrim led the Styr-Asstiki to Ristell, where the Tsahsi welcomed the strangers quite readily, despite their harsh features and blue and grey tones skins. It wasn’t long before interbreeding began, and once it began, Styr-Asstiki and Tsahsi both began to dwindle in numbers, displaced by the ever-increasing numbers of a new, hybrid race. About this time, Zaegrim’s life came to and end, and his soul departed Ristell forever.

The people he had saved honored him as a god, and took to calling themselves Zaegrim’a Nzani, Children of Zaegrim, and sought to secure their kingdom’s autonomy from Arcadia to the south, and later Nyx to the east, swearing never to raise a weapon with intent to conquer. Securing good relations with the neighboring territories was difficult, as the nzani refused to believe Zaegrim had been anything less than a god, and the peoples of Arcadia and Nyx refused to acknowledge him as one.

Now, though the land of Zaegrim'a Oqh is as secure as could be desired, and trade flows freely between the kingdom and its neighbors, political relations remain largely ambivalent, if cordially so. The nzani respect the differences between their beliefs and those of their neighbors, and their neighbors are generally content to leave the nzani to their beliefs.