By Tooth And Claw Dragons
WEST RISTELL, Land of Sea and Sky

Above the hinterlands of Everdark, Ristell’s vast territory is carved six ways by the great nations of Arcadia, Nyx, Zaegrim’a Oqh, Tempest, the Cloudkingdoms, and the Wilds.

Deep in the Tempest Sea, a merfolk kingdom dominates the waters of Ristell. Separated by dint of their environment from the landlocked kingdoms, inhabitants of Tempest are nevertheless consulted on matters involving naval trade or warfare, though many are content to keep to themselves, maintaining their isolated power and largely left out of the conflicts and rivalries of their sisters. As such, they have acquired numerous legendary qualities among the surface-dwelling peoples of Ristell.

Often reflected in the churning waters of the ocean, located high in the sky are the flying cities of the Cloudkingdoms; settlements large and small that are built upon the clouds, and wander far in every direction. These cloud-cities are kept by both the keht'shu and the d'jini, and their shimmering facades and tall, sparkling walls can be seen amid the thunderheads for many miles around. The Cloudkingdoms are not a single country; instead, each cloud-city is run by a King or Queen, and is held as a small kingdom in itself. 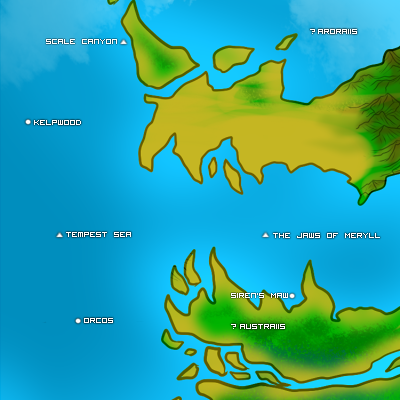 APPEARANCE: Under the guidance of the city's inhabitants, the clouds on the upper surface of the airborne city have been formed into tall, angular, imposing structures which reflect the various colors of the suns and moons, with colors shifting as the days and nights pass. Towering spires and soaring arches are common sights.

CULTURE: The inhabitants tend to be aloof towards happenings on the ground, although they will greet foreigners who manage to reach their city with open, if not overly welcoming, arms. They tend to be reserved with outsiders, and their city is rather rigidly hierarchical. City elders form a council which elects a king or queen who reigns for life, and by law alternate between d'jini and keht'shu. They are heavily devoted to worshiping Zephyro, and hold extensive celebrations whenever he is sighted.

APPEARANCE: Much like Aroraiis, except replete with domes and minarets rather than spires and arches. As colorful as Aroraiis, for the same reasons, Austraiis is often made to turn so it catches more of the light, or at an angle to cast more artistic shades of light across the city.

CULTURE: While they are as aloof towards affairs taking place on the ground, or beneath the sea, they are more welcoming towards outsiders who manage to reach their city. They are as devoted as their sister-city to worshiping Zephyro, and make an effort to track his flight across the skies. While this is difficult at best, the city elite make bets on who can make the most accurate prediction. A dual monarchy governs the city, with the monarchs switching out with one another according to a strict schedule.

APPEARANCE: Crafted from coral which has been coaxed to grow in specific designs, Orcos is a living city in more ways than one. bright and vibrant, with entryways and exits set at all heights, and filled with myriad chambers and corridors, it is a splendid city, although few indeed are those who dwell on the surface who have seen it.

CULTURE: The living city is held in high regard by its inhabitants, and deliberate damage, or even accidental, is met with swift retribution. The people of Orcos give great homage to Meryll almost exclusively, and take great care of her temple. The High Priest is seen as as high an authority as the reigning monarch, although the two take care to keep their respective responsibilities clear and separate. Unbeknownst to many on the surface, the offerings cast into the sea for Meryll are carefully gathered and taken to her temple by her aquatic priests. Records are passed down verbally, as permanent records are impossible to keep due to the corrosive seawater.

APPEARANCE: A city of carved stone concealed within a massive kelp forest. Unlike Orcos, Kelpwood lacks a variety of colors, although carvings of Meryll adorn the city. The Merfolk prefer to let the city go unnoticed within the kelp. To that end, the city itself is asymmetrical, and rounded, and the entry ways are kept concealed. Within, carefully placed holes allow sunlight to trickle in, and polished surfaces cast shimmering reflections upon the corridors and chambers.

CULTURE: Despite their desire to keep their city hidden, the merfolk of Kelpwood often venture to the surface to greet passing ships. As keen as their brethren in Orcos in their devotion to Meryll, they make annual pilgrimages to her temple to worship. They have a habit of excavating shipwrecks and salvaging anything of value or beauty. While the best of these finds are offered to Meryll, the rest goes to the city, or is sent to Orcos. Depending on the reputation of the former captain, some of the recovered items might be returned to the surface.

The Jaws of Meryll

The strait formed by the island sitting in the two peninsulas which make up the jaws of Meryll can provide shelter for ships fleeing storms forming out on the Tempest Sea. However, rather fittingly, storms can also appear with amazing suddenness in the strait itself, and the shallow waters can turn rough in a heart beat.

Though not a true canyon, but an active oceanic trench, it is a long gouge in the undersea that is sacred to leviathans and sea serpents alike. Here, they will toss a scale in for luck; if a tremor through the trench answers them, they see it as a sign that their offering has been blessed by the gods. If only silence answers, it is seen as an ill omen.

A dark place with stalagmites as far as the eyes can see. The rushing waters overhead echo through the rocks with haunting melodies throughout. Sea siren come here to practice singing, layering on the melodic effect. It's common to find non-siren children lurking on the outskirts, daring one another to venture inside - though they are never harmed, not affected by the songspells sung.

The vast abode of Meryll. The Tempest Sea runs from Nyx in the north, down the coast of Arcadia, all the way south to the Wilds. Home of the merfolk, an those xeriin who dwell in the water, the sea can live up to its name if Meryll should grow displeased, and decide to unleash her wrath upon the surface.

The world of Ristell is one of extremes; with only a single continent rendered habitable by the gods, the rest of the Realm is said to be covered in fire or ice, and nothing is known of any lands without. Several suns blaze brightly in the daytime, and a handful of moons at night, carefully watched and controlled by Azcen and Nirni. The Moon That Never Sets hangs ever in the sky, worshiped by the iahake, while the suns are honored by sol'tera and sphinx alike.

Ice covers the northern half of Ristell, accompanied by fierce blizzards that tear at the countries of Nyx and Zaegrim'a Oqh, and at Ristell's heart can be found the vast Arcadia Desert, often too hot for most weaker species to tolerate. South lay the jungles and forests of the Wilds, and to the east lay the Tempest sea, holding the kingdom of Tempest, and the various cloudkingdoms led by the keht'shu in the sky.

The Underground is called Everdark, and is vastly different from the surface world - lit by gemlights and sunstones, the peoples of the Everdark fight fiercely the attempts of Arcadia to gain control. Dark-skinned peoples of the surface are often attacked simply for the color of their skin, and many racial slurs exist against sol'tera, liniah, and keht'shu alike.