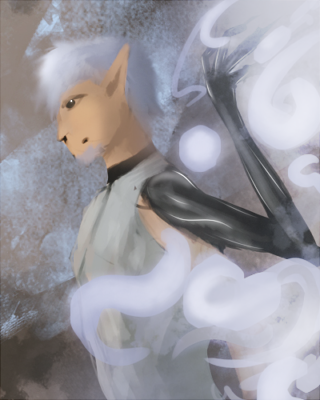 Keht'shu are a race of faintly elven humanoids with the innate ability to channel their reiatsu into enchanted metal 'arms' fused with their shoulders that grow as they do, forming wings of shimmering aura. They live high in the clouds, and have some of the strongest reiatsu capabilities of most species, resulting in many skilled and well-respected mages. They also share a unique bond with the d'jini species, and to both greater and lesser weather gods, Scylla and Zephyro.

Name:: Keht'shu, people of the Clouds

Avians Keht'shu and avians have long held an intense dislike for one another, as avians often view a keht'shu's artificial wings as a blight and mockery of their own. They are very vocal about this, and often go after keht'shu younglings, destroying their metal wings and leaving them grounded.

D'jini Friendship Keht'shu and cloudcats - the leonine d'jini - have long been allies, created as such by the goddess Scylla. Crafted in a celebration of Ristellan peace, keht'shu and their companions created great cities formed of clouds, and have had close ties ever since. Some can become soulbound to one another, much like dragons and their riders, and the two species often work together in many things.

Keht-shu are omnivorous, and get their food from hunting as readily as gardening. It is rare for them to fish or root around in the ground for tubers, but not unheard of. They tend to share the fruits of their labors with their d'jini allies, and thus commonly have hunting parties with cloudcat members.

Landstriders tend to eat more fish, tubers, and mushrooms than their winged cousins, but otherwise have similar diets.

Appearance Keht'shu are slender, light humanoids; most of their weight comes from the enchanted metal forged for them at birth that fuses with their shoulders and grows as they do over many thousands of years. These metal 'arms' can come in a variety of different metals and designs - the most common features swirling, intricate pieces of metal shaped like the arms of a true wing, with either a single or several long wing fingers. They are able to harness their reiatsu and build wings of energy around the metal that resemble the wings of a lightbeast over all. The reiatsu can be shaped in a variety of ways - some can refine it enough to appear as long feathers or flat web, though most opt for a much simpler design. Through their lives, keht'shu may also add to their wing-metal and older individuals may have multiple pairs of wings. Once of age, a keht'shu cannot 'turn off' the magic that feeds their wings - as such, they cannot hide in the darkness if their reiatsu burns brightly, and their cities in the sky dance and glow with shimmering light.

Skin color ranges over a wide spectrum, though many keht'shu range more towards darker tones than lighter ones. Hair color is often extravagant and unnatural, either dyed or bespelled, oftentimes to match the color of the reiatsu glistening from their wings. They usually have large eyes and pointed ears, and hair length varies from individual to individual. Their eye colors can range widely, as well, and may glow in times of extreme emotion - especially anger or despair. Attire usually consists of light, baggy clothing and assorted jewelry, as well as metal bands and collars that match the alloys in their wings. If a keht'shu has been injured enough that their wings cannot be repaired or re-enchanted, they will often wear heavy cloaks and hoods to avoid notice, landbound as they are.

Culture Having settlements in the clouds, above the reach of any without wings, keht'shu rarely interact with few other than their d'jini friends. Their cities are almost always constructed of enchanted clouds and stone bespelled to be light as air, often protected from incoming storms by magical barriers upheld by specially trained mages. D'jini are always welcome in their cities, and many live side by side amid the clouds, while other flying creatures are viewed with great suspicion.

Keht'shu civilization is often overseen by a King and/or Queen; each city serves as its own city-state apart from Ristell's countries, and they do not answer to any but their own. However, keht'shu are not above trade alliances with other countries, and may fly to one's aid if the need is dire. As a whole, the keht'shu people are very protective of the weak and humble, and will fight to protect them if no wrongs have been committed before. However, the cloudcities do not forget a wrong, and will shut out any who are branded as traitors from any and all future help.

Most keht'shu merchants and craftsmen are travelers by trade, and will spend much of their time flying back and forth from cloudcity to land to hawk their wares. Keht'shu specialize in crafts that involve reiatsu-fused items and items crafted from enchanted clouds; these can be anything from jewelry and trinkets to weapons and armor, highly sought after by the sol'tera nomads in the Arcadian desert.

Abilities All keht'shu are incredibly quick and light on their feet; sol'tera often refer to them as 'magic falcons', as most are small of stature but very swift. Due to their ability to channel their reiatsu into the enchanted metal embedded in their shoulders into constantly-visible wings, flying for very long distances or using too much magic leaves them very prone to overtax. Other than this, they are very magically gifted, and often master their reiatsu abilities at a relatively young age. Rarely, a keht'shu will be born that can manifest his or her reiatsu into wings without the need for any metal arms to channel it; such children are guarded closely, and trained into adulthood to be capable warriors.

Though now the Realm is one of order and stability, despite the occasional wars, Ristell was born in chaos, and its early years were filled with conflict. This was particularly true between the early sol’tera and those dragons who came to settle upon the Realm. A bloody war broke out, and raged until the sphinx intervened, negotiating an end to the hostilities, and settling the belligerent races away from one another.

Shortly after, in celebration of the newfound peace, Scylla crafted a new species, very similar to elves, who would dwell in the skies, living within cities crafted form clouds and enchanted stones high above the ground. She took a stray puff of cloud and a brisk wind, combining them together, and forming them into a slender, almost elven form. Light, hollow bones supported a slender frame, and she blessed the new creature with lightweight metal arms that fused with his shoulders. She then blessed him with a highly powerful aura with which he could conjure wings of pure energy that could carry him through the air.

This was the first keht’shu created. More would soon follow, each gifted with metallic arms that could be used to conjure wings, and the first of them reigned over them as their ruler, for as long as he lived. Most decided to remain on Ristell, for though they could travel to to her realms as easily as any race, their appearance was seen as a mockery to the avians, who often attacked any keht’shu they found, and tore their metal arms apart so they couldn’t fly.

But, on their native Realm, and with other species, they got along quite well, and grew to be a prosperous civilization, as respected on Ristell as sphinx, liniah, or sol’tera.

This Ancient First was a keht’shu who was inspired to explore by his encounter with the First D’jini. Blessed with wings of pure reiatsu, silver gold in color, he followed her for a time before coming to a place where he may settle his people. Though he longed to master the skies, he remained behind to lead and protect his kind.

The landstriders are a race of keht'shu driven underground; though the initial conflict was lost and all record of it erased from memory, the two still no longer speak. Now, landstriders dwell beneath Ristell's surface, and away from those who drove them from the sky.

Landstriders appear humanoid, and bear some resemblance to elves; they are generally lithe and slender, with a variety of skin tones and eye colors. Most landstriders wear any assortment of materials in any color, and they are fond of gauntlets and gloves to protect them when digging and mining.

Unlike most keht'shu, landstriders have mastered the ability to utilize their reiatsu without needing enchanted metal constructs to help them - they have the inherent ability to shape it into different things around their hands and arms, generally in the shape of blades or claws to help them underground. While other constructs are more difficult to manage, they are not impossible; however, landstriders shun the creation of wings, and will oust any of their number that attempts to take to the sky.