By Tooth And Claw Dragons
World of Noctis 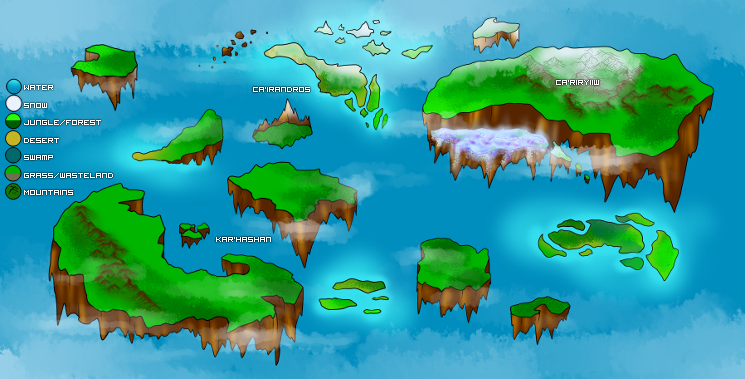 Click on any of the names to be taken to the page of that continent.

Rituals for this Realm

Holidays for this Realm

Noctis, Land of Sea and Sky, is a place filled with floating islands and continents, suspended above the oceans by powerful magics, and grand cities beneath the ocean's surface. Three beautiful moons grace the skies of this Realm, and very few natural islands breach the surface of the vast ocean.

For those who can neither fly or swim, it isn't an easy place to live. A world of great natural beauty, and an ongoing rivalry between peoples of the skies, and peoples of the seas.

Here is a listing of factions, native species, fauna and flora that can commonly be found in this Realm. Keep in mind, however, that these are not the only things that may be found within Noctis; different groups may travel, many species can be found abroad, and flora/fauna can be transferred with ease.

The great Markers of Noctis bind the Realm to Ristell, its balance, and to the great Void Hydra that holds the Fiv'ean Realms together.

Guardian: Bora, a powerful, ancient Air Elemental
Location: Concealed upon one of the Tumbling Stones, and protected by those whirling chunks of rock.

Guardian: Anansi, an ancient, spider-shaped True Zirus.
Location: The strange island within the Waterfall Sea. The island's bizarre aura serves as extra protection for the Marker. 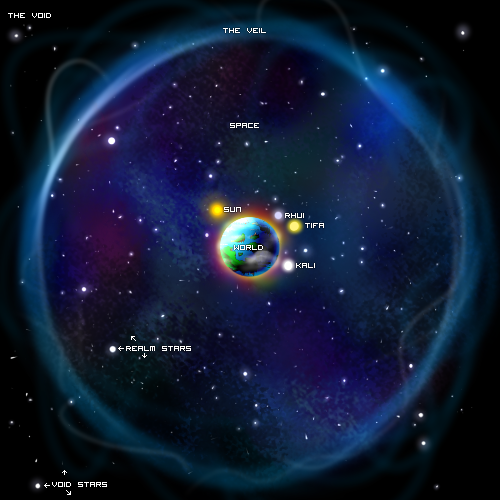 Noctis Constellations click on the link above to learn about this Realm's constellations!

Noctis is known as such for the longer-than-normal nights, bright Realm stars and three beautiful moon that it sports. Void stars are almost completely invisible to those in this Realm, though many claim that time slows during the night (though this has also said to be a trick of the moons’ effects on the planet).

The sun of Noctis is referred to as, simply, the Sun - it holds no great importance in the Realm other than being the herald of daylight. However, the three moons of Noctis are sacred, and many peoples worship them as divine creations of the gods, for their intricate control of the oceans and influence on the weather high above. The first, small and silver, is named Rhui; the second, large and gold, is called Tifa; and the third, large and white, is called Kali.

The Veil of Noctis is thin, and the nebulae within sparse, colored deep blues and blacks, nearly invisible to the eye. The black energy within gathers almost completely near the Veil alone, blocking out the light of the Void stars, of unknown strength and properties.

commonly found;; Most common are trees and plants found in temperate climates, although a fair number commonly found in mountainous regions can be found on some of the higher islands. Many water plants grow in the oceans.
rarely found;; Plants that grow vast plains, by rivers, or in dense rainforests, swamps, or jungles are very scarce.
doesn't exist;; Plants that only grow in dense jungles or swamps aren't to be found, as Noctis doesn't have either.

The currency of the Allied Realms is called the jaden. They come in four denominations: the bronze coin, the silver coin, the gold coin, and the platinum coin.


The conversion rate for jaden to USD is 1 jaden = 20 cents.

Average prices for common objects are listed below:

While to outsiders, it might look like the people of Noctis worship Seiten whil abhorring Albion in a standard dichotomy of good vs. evil , the truth is rather more complicated. While they certainly worship Seiten, and have several ceremonies and festivals devoted to her, they don't completely abhor Albion. While they don't perform any ceremonies devoted to him, or do anything that might draw his attention, they tend to view his presence and influence as tests of their own character and fortitude.

Not so very long ago, the Sky Peoples and Sea Peoples were waging a long, bitter war that has left numerous scars and bitterness on both sides. The Sea Peoples claim they were unjustly assaulted by the Sky Peoples who sought to gain dominance over them, while the Sky Peoples claim they were provoked by the Sea Peoples, and were merely retaliating. Whatever the original cause, there is still a lot of animosity, even though the war has officially ended. Among their own kind, their are two rising powers. Finnarok, beneath the seas, and Gilzelfa, of the skies, are both seeking to expand their influence over their neighbors. While they both have wide-spread influence over the affairs of those who dwell in sea and sky respectively, their rule is far from universally accepted or acknowledged.

With the recent war only barely ended, the various cities and countries of Noctis still maintain a rather militant stance. Many of the sky islands and continents each have their own small army, while the oceanic species maintain patrols near the surface, on the lookout for possible raiding parties. These small armies and patrols are generally made up of whatever species live on whatever island or continent they come from, or what part of the sea they're in. Both Finnarok and Gilfelza maintain small but professional standing armies.