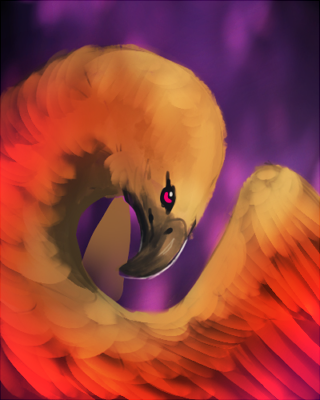 The phoenix is a race of great bird that is known for its ability to be 'reborn' after death; each of the three variants are reborn in different ways. Typically orthodox and nonviolent, fire and ice phoenixes are invulnerable to their own element, but can be killed by magic and reiatsu; on the contrary, the demonic phoenixes are incredibly volatile, attacking anything that comes into their territory.

Signs of Old Age As phoenixes draw closer to death, their bodies may exhibit signs that signal their approaching rebirth; all three will shed their plumage faster than average, and they may exhibit uncontrolled, but small, releases of their natural elements. Things may burn accidentally at a touch with a fire phoenix, or freeze without warning around an ice bird. Demonic phoenixes are the most dangerous in their elder years, and can poison or corrupt a large area without meaning to, often harming or killing those nearby.

Fire and Ice-
small game such as rabbits and birds; gum resin and sap to accent their diet.

Demonic-
large game, primarily darkdeer; they can consist entirely off of drinking blood (not bloodwater!), as well.

Demonic-
small Kuraian game and sapient races they can kill. calcium-rich substances, such as bones.

Demonic-
plantstuff; nuts and berries. phosphorus and other minerals.

Over all most phoenixes live off of natural resources and non-sapient prey found easily within their chosen environments. The exception to this are the Demonic phoenixes, as they are quite fine with hunting and killing those creatures that may show similar intelligence levels as them. All three variants may exist off of minerals as a staple to their diet, though only fire and ice phoenixes can exist off of plantstuffs as well as meat; Demonic birds cannot feed off of such things for very long, due to their inherent bloodlust.

Of the phoenix subspecies, the Anquil species is most like Demonic phoenixes in diet and feeding patterns. However, as Anquil phoenixes do not have access to Kuraian prey, they live off of prey - both sapient and not - found in Anquil, often twisted by the magestorms there. They also feed off of dark energy, and can forgo living meat so long as such energy is of a quantity enough to sustain them without the need to actively hunt.

Appearance Fire: Fire phoenixes generally have plumage that consists of warm colors and hues, including reds, oranges, and golds. Other colors are uncommon, but may be present; markings of any shade have been noted. Diversity in build is common: some phoenixes may have swan-like appearances, but others may be more hawk-like or eagle-like in appearance.

Ice: The antithesis of their flaming variants, ice phoenixes have cooler-colored feathers. Instead of the bright plumage of the fire phoenixes, many ice phoenixes have white with grays - sometimes even pale blues, greens, and violets. They have thicker feathers, the sizes of which are usually slightly smaller than fire phoenixes. Traditionally, ice phoenixes’ appearances generally lean more toward those of hawks than other bird variants.

Demonic: Demon phoenixes have darker-colored feathers, and rarely - if ever - does one see a demon subspecies with brightly-colored plumage like their fiery cousins. They have been spotted in dull shades of every color and are larger than both fire and ice variants. Their talons are longer than their cousins, with jagged edges perfect for shredding any that trespass on their territory.

Culture Fire/Ice: Often considered the more peaceful variants compared to their demonic kin, the majority of these phoenixes are solitary, and are mostly nonviolent creatures. Rarely, phoenixes may congregate into flocks of three or four individuals, but most only come together to pairbond and breed. Older phoenixes - those that have been reborn a number of times - are thought to be quite wise, and may take up residence in towns and villages as sages and healers.

Demonic: The Kuraian counterparts to their ice and fire variants, demonic phoenixes are violent creatures; they mercilessly attack any that stray into their fiercely-defended territories. They only meet others of their kind to pairbond and reproduce, rarely deigning to associate with any other species in any manner. Demonic phoenixes are known to have a savage ferocity about them; they can rarely be reasoned with, and may be unpredictable and very dangerous. Most are sadistic, and enjoy killing for sport.

Fire/Ice: Both varieties of phoenixes can be reborn if they are killed by either magic or reiatsu, or if they reach the end of their natural lifespan. They are invulnerable to their respective element, but if they are slain by a physical attack, they truly die. Fire phoenixes burst into flames upon death and are reborn from the ashes while ice phoenixes are reborn after their bodies freeze into solid ice, melting to reveal the chick that is left. Upon this magical death, fire and ice phoenixes may choose whether to be reborn or die permanently. Phoenix tears can heal and their songs soothe the sorrow of the downhearted.

Demonic: Demon phoenixes possess no magic; however, as their beaks and talons are weapons enough, they have no need of it. If attacked by magic or reiatsu, they can be reborn from the blood of a living creature, though it cannot be of an individual that they've killed. Their natural lifespans are around that of fire and ice phoenixes, but most demon phoenixes die permanently before their first lifespan is over due to their combative nature.

All: Phoenixes of any variant may resonate with their element in times of extreme emotion or great magic use; these individuals may leave a visible aura behind them when they move, and it has been noted to persist for minutes to hours at a time. Fire phoenixes may be wreathed in flames, and may leave a trail of fire, searingly hot air, or smoke behind them. Ice phoenixes may be coated in frost, and sometimes leave trails of snow, icy mist, or minute ice crystals in their wake. Demonic phoenixes have been known to trail dark clouds of corrosive air behind them, and may burn with sickly smoke that may have a variety of debilitating effects to those around them.

In the early days of Evylon, Zeldrima paid a visit to that wild Realm in the guise of a great phoenix, spending time with Evylon’s two gods, one who wore the form of an elf, while the other bore the form of a phoenix, as she did. While she was took great pride in her beauty, she was not so vain that she wanted to hoard her beauty to herself, and it struck her as selfish that the only two beings in all the Realms to bear the form of phoenixes should be gods.

The Evylonian gods agreed, for there were already countless elves in the Realms, so why should the phoenix not be the same? The three gods then searched Evylon, and found a beautiful bird perched in a tree, with feathers of rich red, bright blue highlights, and black beak and legs, gleaming in the evening sun. The elven deity gifted the bird with intelligence and power over ice, while the phoenix deity gifted the bird with immortality and power over fire. Zeldrima bestowed upon it the ability to resurrect from its own ashes if it were to be slain by magic, if it so chose, and a fierce anger if provoked.

However, she warned the first phoenix that if it were slain by the sword, or the claw, or any physical wound, its life would end. The first phoenix took this to heart, and went out into the Realm. The three deities watched it fly, then gathered more birds. Some they blessed with fire, some they gifted with ice. Then, feeling they needed a balance, the three took a few, and darkened their feathers and minds, leaving them with little magic, but made them all the fiercer.

Since their creation, most have left Evylon, and settled on Felnova after that Realm’s creation, though a few can be found on other Realms. Many of those that remained on Evylon became even more terrible than those created by the gods in the early days. However, no phoenix has ever shined with such beauty as the first, who is believed to still be alive and free in the Realms.

Nothing is yet known of this Ancient First's appearance or abilities.

A solitary, deadly species of phoenix, the Anquil Phoenixes have thin scales beneath ragged and oily feathers, jagged beaks, and a distinctive, eardrum-shattering scream that can be heard from miles away. They are similar to the roc’a in that they are immune to magic, the extent of which extends to their ability to eat dark energy. They seek those with malevolent intent in their hearts, hunting them down to devour as prey.