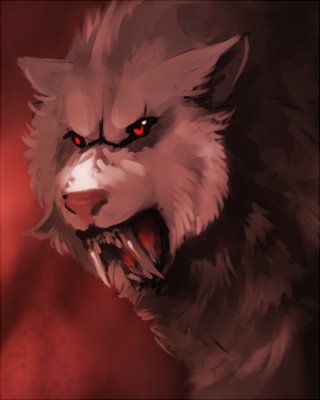 The deathcat is an exceptionally powerful relative of the Vystrian lion with jaws equipped with saber fangs. Generally vicious, these creatures live in large prides in a variety of areas. Most commonly found in the jungles of Nimravus, located in Felnova. It's important to note that while many hate the drow, they are mortal enemies with the veldryn.

Average Height:: 4.5 feet at the shoulder

Location Found:: Jungle areas; though may be found anyplace with prey.

Appearance Deathcats are a sabre-toothed tiger-esque species, normally dark-pelted with a multitude of markings. They are generally the size of a large wolf or small pony, very heavily muscled, especially around the shoulders and chest. Some sport a bristle-like mane or ruff of fur between the ears and down the neck as well, and instead of being bobtailed like the traditional smilodon, they have long tails that can reach the length of their body, sometimes a little more. Deathcats also may have two sabres instead of the one, single pair; one shorter than the other. All, unless especially unkempt or a hybrid, are short haired.

Culture The deathcat species are not inherently evil, despite many elven claims that they are. Living in prides sometimes well exceeding a few hundred, they hold the lands in a continent south of Vystriana dubbed Nimravus. Their capital is Eofelis, a semi-city of dens and jagged rock where they make their home. Males train day and night and have an established system of ranks based around an authoritarian military, led by a pride-leader who can be either male or female, though the females are a bit smaller than their male counterparts. Relations with any race but their own are frowned upon, and if a deathcat takes a mate of another species, he or she is forever banished from Nimravus, given a few days to leave the continent or be cruelly hunted for the rest of their life. However, if a hybrid kit is born or found within their territory, they will raise it as their own. But it will always, always be the loner of a group, publicly shunned and mistreated.

The bloodfeud between drow and deathcat began before the elder-line of dark elves left Heartwood; originally a race patrolling the forests of their homeland they were driven out, and promised revenge. Thousands of years have passed now and though ancient and nearly forgotten, the feud still stands.

Abilities Deathcats have little magical ability, relying mainly on their strength and stamina to win battles and wars. While intelligent and capable of human speech (namely Common, though some have learned the other human languages with only mild difficulty), they are incapable of wielding human weapons or donning human armor without help from an outside source - which they detest. Strength of tooth and talon is held above all else in deathcat society.

There is one small exception to this, perhaps distantly related to the veldryn's way of knowing whether a member of the species has been killed. At times of great need, the deathcat pride leader may send out a call - a call that will reach any of deathcat blood, one that will give them a nigh-irrisistable urge to return to their leader and aide in whatever trouble they find themselves in. This power is used sparingly and takes a great deal of strength, and has not been attempted in nearly a thousand years.

After the Realms were created, and various creatures placed upon them, the Ten were free to make occasional forays to the various Realms. It was during one of these moments that Time decided to visit Noctis. Out of courtesy, he briefly met with Seiten and Albion, then went out into the Realm on his own. During his travels, he happened upon a pride of feline creatures, and took some time to observe them.

As he watched them go about their lives, he was impressed by how well they worked together, and looked out for one another. Eventually, he grew convinced they could be just as noble as any elf or human, if their minds were as capable of rational thought. To this end, Time took the pride leader, and quickened his mind, giving him the power of speech and reason. Then he bestowed a more powerful body, with long, sharp fangs.

You shall be called stonelions, for lions you are, and you dwell within stone dens. Your minds shall be the equals of any human or elf’s, and you shall be a mighty nation he decreed. Pleased with his work, he made the rest of the pride into more stonelions, remaining for a time to watch his new creations go about their lives, before departing and leaving them to their own devices.

Over a millennia had passed since the Vystrian lions appeared, but during that time, they had fallen under the cruel gaze of the Dark Five. After some discussion among themselves, they lured a large, ambitious pride of lions into Nimravus, then imprisoned them.

There in that wild land, they molded the king of the pride into a new shape. His fangs grew to more closely resemble those of the old stonelions, and regained much of the stonelion musculature. His mane fell out almost entirely, leaving only a thick scruff on the back of his neck, and his fur darkened to a deep shade of grey. The Five then infused him with great pride, greed, and bloodlust, but stripped him of his magic, naming him the first deathcat.

Pleased with their work, they turned the rest of the pride into deathcats, then turned them loose upon Nimravus, which they soon claimed as their own. When exactly they began to claim slaves for themselves, or when or over what their feuds with drow and veldryn began is unknown, but these feuds remain as strong as ever.

The Dark Five were content to let their new creations cause havoc of their own volition, leaving them to their own devices and going their own separate ways, while the deathcats prospered through their own strength.

This Ancient First was a stonelion that looked like a large, black lion with no mane; he had long saber fangs and a short tail, eyes gleaming bright green. He was noble and proud, and had incredible, unwavering strength.

The athyra are a subbreed of deathcat who, through mutation or interbreeding with other feline races, have become their own entity often looked down upon by true deathcats. This includes all species of cat, save for sabers (deathcats) and lions (Vystrian lions); including but not limited to tigers, panthers, leopards, bobcats, house cats, and any blend between them, often found with widely varying colors and patterns not found on traditional felines. A great many are very magically gifted, and unusual mutations, as well as odd markings, are very common. Size varies incredibly, and any individual athyra can range from beyond horse size to only six inches tall.

Many athyr are individual hunters, though some types may band together in self-called 'Clans' - generally accepted by athyra to be a defense against the hostile deathcats who they are related to - filled with many different kinds. These Clans are almost specifically found in Nimravus and Noctis, though others have been found in other Realms.

Also known as "fu dogs" to those outside of Kurai, the komainu are legendary creatures born from unions between hellwolves and deathcats far back in their distant history. Once, many eons ago, a Famine Lord was gifted a pair of deathcats in exchange for an alliance with a Felnovian country, though the details of such a truce have been lost for many years. As an experiment, as deathcats do not live nearly as long as hellwolves, the pair was crossed with Famine hellwolves to create extravagant hybrids who vastly overpowered both of their parent species. In the many years since, other Lords have captured and bred their own lines of komainu, and each kingdom has a different, variant strain.

Komainu are large creatures about the size of a horse that resemble crosses between lions and dogs, with several defining features. Most have large manes and fluffy, often curled tails, with large and curling fangs (sometimes "tusks"), as well as great, retractable claws on flat, leonine paws. Famine komainu have startling green eyes, and are longer and leaner than their brethren; their manes are thinner and not as extravagant, built for speed and agility. War komainu have deep blue eyes, and are often brightly colored and heavily built, with large, fluffy manes and tails; War komainu are often more brightly colored than the other Kingdoms. Pestilence komainu have deep, golden eyes, and have longer fangs and claws than their brethren, as well as often unusual manes and tails, varying between individuals. Death komainu have bloody red eyes, minimal manes, and long, straight horns; they are often dark colored, and almost ethereal.

Komainu of any Kingdom travel in small prides, family groups, and are otherwise fiercely independent and highly territorial. Though the individual loyalty of a single komainu, or a small family unit, may be won by a Demon Lord through various means, if that Lord dies or is replaced by an heir, that loyalty must be won by the replacement or their service may never be won back again. They are protective of their Kingdom, but it is on their terms - they fight for what they will, and are rarely content with taking orders from a Lord that has not won their respect.

Gifted with intense strength and stamina, as well as very magically adept, a single komainu may prove a challenge to an entire pack of hellwolves. Their powers range from a single element to non-elemental, energy-based magics, such as reiatsu or pure-energy barriers, as well as basic things such as telepathy and mental acuity.