By Tooth And Claw Dragons
NIMRAVUS, Land of the Feline

Often called the Country of the Cats due to its ruling species. Driven here many years ago by the invading dark elves from Alubria, the founding prides fled across the Great Water from Vystriana, and moved to claim the jungles of the south. Since then, a seething hatred has boiled within each 'cat, passed down from elder to cub through the generations, until such anger aimed at the drow is nearly natural instinct.

Nimravus is an uninhabitable, inhospitable country filled with the threat of twin-sabered jaws. Any two-legged creatures that pass across the borders are fair game for any of the prides, and the leading Eofelis actively enslaves all it comes across. It's become a hub of slave-trading with those brave enough to test the waters - though to trade with a deathcat is to court disaster, and always must be approached backed with a small army. 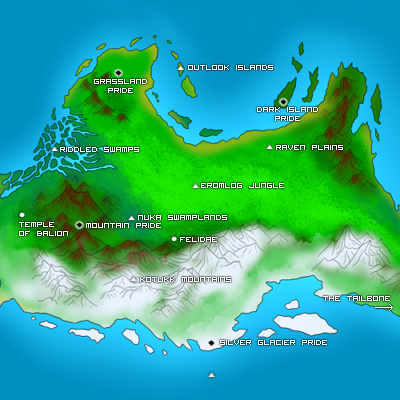 APPEARANCE: The city of Felidae is the only scrap of civilization in all of Nimravus; it is overseen by the oppressive Eofelis Pride, who rules the entire central expanse. Ruled with cruel, heavy-handed claws, the people are little more than slaves, and their city is a meager collection of stone huts thatched with straw. The outer wall is made of a thick brick-and-mortar combination of granite and adobe, serving as a front line to protect the Eo's densite.

CULTURE: Felidae's customs are few and far between; when not forced into subservient farming or hunting for their masters, the people celebrate little. However, the Pride allows them one grace - a period of mourning for those fallen, be it by execution or death from overworking. This is a ceremony usually held at night, around a bonfire at the city's center, where all who knew the deceased (and even some who did not) hold candles as the fire burns. When the flames grow low, they all blow the little fires out at once, and set their smoking candles in a circle around the charred wood. It's said that the soul of the departed can thus be seen, briefly, in the smoke before it fades away.

APPEARANCE: Balion's temple is less a typical temple, and more of a grove of various types of trees standing within a large circle of massive standing stones. A small stone shrine overgrown with tangles vines houses a statue of Balion at the center of the grove. Visitors to the temple often sit beneath the branches of the trees, eating of the fresh fruit that always grows within, and depart feeling rejuvenated. The statue of Balion changes colors with the seasons, just as Balion himself does, as do the trees.

CULTURE: Perhaps one of the very few places in Nimravus where the deathcats do not prowl for hunting, Balion's temple is a sacred place welcome to all. Most who travel here do so by portal - priests of Balion are happy to transport newcomers to the temple from faraway places, and druids dedicated to the god can often be found in the jungles and forests that surround it.

ABOUT: Located in the grassy plains at Nimravus' arid northern tip, the Grassland Pride is one of Eofelis' rival prides. Generally, a grasslander will be a tall, lanky deathcat with short fur and a bristling, hyena-like mane. These beasts are known for their speed and excellent hunting ability.

CULTURE: Strong and swift, the grasslanders are known to be fierce enemies and deadly hunters. However, they are also known as Nimravus' most tolerant pride; more than once, mothers with cubs have protected a trespassing human from the claws of the more violent males. They do not take slaves, and don't hunt the two-legged for meat.

ABOUT: Located on the desolate, rocky island that flanks the Raven Plains' western shore, the Dark Island Pride is one of Eofelis' rival prides. The furious islanders are violent and bloodthirsty, built like short-furred tanks with long twin sabers. They are the criminals of Eofelis society, and were banished from their main pride long ago. They've grown in stature from hunting the great eagles that nest along their peaks, and hold a deep-seated hatred for everything that moves.

CULTURE: More militaristic than their sister-prides, the outcasted islanders are trained from birth on how to efficiently kill. They don't take slaves for the simple reason that anything that wanders to their shores is fair game for an early dinner.

ABOUT: Located in the towering peaks and jagged canyons to the middle-south, the Mountain Pride is a pride that was taken over and is controlled by the Eofelis Pride. The rocklanders, as they're often called, are brutish, thick-furred deathcats with exceptional strength. Some of the mountain deathcats also have a third, longer saber, as well as lynxlike ear-tufts. They're very proud and noble, and refuse to take slaves - they feel it's kinder to kill instead.

CULTURE: Though less militaristic than the islanders, the Mountain Pride holds its warriors in high esteem. As a coming-of-age trial, each adolescent is tasked with bringing down a kirin from Kurai - all the way from figuring out how to open a portal on their own. It is a very dangerous task, and those that return out of fear are held in contempt of shame. Since their takeover by the Eofelis, they are often sent to guard Eofelis' borders, as they are exceptionally strong for their pride's small size.

APPEARANCE: Located in Nimravus' terrible icy wastes, the Silver Glacier Pride is one of Eofelis' rival prides. Little is known about this pride, though they are known as the 'icelanders' and are mountain deathcats adapted to the frozen wastes. With exceptionally long, thick fur, these felines are nearly all white-pelted to blend in with their snowy surroundings.

CULTURE: Nothing is known of the icelanders' customs or battle tactics. None have survived long enough to return with a report.

Home of the rocklanders, this range is known for its jagged peaks and crumbling cliffs. Dangerous to a point, the only way through is known by the Mountain Pride, their most jealously guarded secret. The western portion is riddled with caves and caverns, and serve as protection from the deep snow, hiding within many secrets. It's said that an ancient people, the same that dwelt in the Riddled Swamps, have left their treasures here.

A completely iced-over sea devoid of life; broken slabs refrozen into the ocean's surface form sharp spikes and hooks, treacherous for anything that wishes to cross. The ice can be exceptionally thin in places, and thus more dangerous, claiming the lives of those that try to cross its wastes. A dense fog drifts along the ice at all times, and is rumored to be populated with the spirits of the damned.

Intricate and deadly, the Nuka Swamplands span nearly three full quarters of Nimravus' length. It's filled with twisting, intertwining roots and trees with a variety of undergrowth, moss and mold. Some roots are large enough to walk upon, and thus form pathways - if one should stray off and away, the pollen secreted by the flowers found there is stirred and its hallucinogenic properties activated. Once inhaled, visions - most often those having to do with the recently departed - assault the victim, rendering them unable to see or hear danger around them. As deathcats are inherently immune to this pollen, they use this as a way to hunt other species, and attempt to draw travelers off of the pathways intentionally.

The islands visible from the grasslanders' territory are sacred to Nimravus; a haven for those escaping the deathcat hatred of the mainland, it's a popular landing point for explorers and adventurers alike. It's said to be surrounded by an aura of purity that protects them from malice - and deep within the forested isle is said to be hidden a great Seeing Stone, able to show happenings from many, many miles away with crystal clarity. However, if events are viewed closer, the image may appear distorted or blurred, and as yet no explorer has been able to explain why.

A vast plain on the opposite end of Nimravus' 'horns', bordered by towering cliffs along the eastern sea near the Tailbone. A virtually uninhabited place, save for monstrous ravens who nest among the rocks. These ravens, their murders numbering in the hundreds, are known for stripping flesh off of bone once they have a victim pinned - even the great deathcats aren't safe, as even a few can incapacitate one with relative ease. Their feathers are very valuable, and sought after by merchants and thieves alike - though strength alone will render little results. To return with a feather from the nests of these birds is to gain the highest honor, recognized for cunning and deception.

The Riddled Swamplands is an area pockmarked with treacherous earth that shifts swiftly from shallows ankle-deep to vast chasms filled with black water. Often, the gloom of the swamp will lead travelers and deathcats alike astray, fated to fall into the sticky water and sink into depths that remain unexplored. An eerie song is said to float among the thick-vined trees, and embedded in the roots, drawn up from the swamps' depths, glitter faint crystals carved with tiny runes. Said to be the home of an ancient people defeated and slain when the deathcats came from Vystriana.

The long, rocky spine of the country, this serves as a neutral place where all pride leaders can meet in relative peace; though the paths through their respective territories can kill a leader before he arrives, Eofelis law dictates that once there, no death may be dealt. It's a rocky, barren land swept by ice and sea-spray alike.

Realm of beauty; of dragons; of the elements themselves. Felnova, Kinniokza, Adduli'in: the world that balances Kurai on the ethereal scale has many names, though the draconic and elven ones are very little used. A land of wild beauty and incomparable power, and one of the most fought-for Realms in our section of the Void today. Strangely enough, Felnova's beginning was one of chaos, and its fate is tied directly to the dragon royals of Vystriana, with great and terrible consequences to hit should they be removed from power by anything but their own volition.

The atmosphere follows the same path that many of the discovered Realms do; in it lays a potent reiatsu surrounding the planet, unseen and rarely felt. It cancels out the electricity and components of anything too technological, such as the wildly advanced machines of the destroyed Earthrealm. At its heart lay the Realm's first Ether, and her purest white reiatsu flows within, invisible but in dire need. Her magic flows through the air and earth equally; when damage is done, it is repaired very quickly, letting the Realm recover in months to the normal few years.