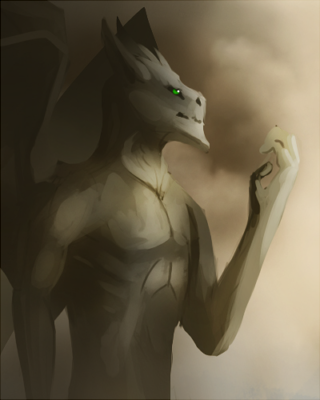 A race of werecreature created in the days of the first world, having the aspect of the dragon. They are heavily chained to the phases of the moon or moons of a Realm, and are compelled to change into their bipedal dragonforms periodically even without lunar guidance. Despite this, however, weredragons are an extravagant race in more ways than one. Culturally, they celebrate life, and their ability to live in the worlds for as long as they can.

Bite Infections and Reproduction A weredragon’s bite, painful and potent, is enough to infect a single humanoid creature. Over the course of a week, an infected individual will be wracked with chills, fever, headache, and aching bones. As the Change grows closer to completion, pain will overtake every other feeling until the urge to shift is forefront in their mind. It is very simple - those who resist that first shift will succumb and die. Those that do give in to the Change will become full weredragons, and will stay in their draconic form for a single night before reverting. It may take up to two weeks for any moon phases to have an effect on them, but once they do, they will be much like any other of their race.

Weredragons may also reproduce with one another to create weredragon offspring. Purebred weredragons are much more common than bite-changed ones, and grow up much like other humanoid children. Most will begin to exhibit moon-chained phasing once they reach adolescence, but no sooner.

Metal Poison Metal is severely poisonous to a weredragon in their full draconic form. The greater the rarity of the metal in question, the more toxic. Pure iron or copper would be merely irritating, while pure gold or platinum would be potentially lethal if it entered their bloodstream. Blades made of rare pure metals can slice through their skin, hide, and scales like a hot knife through butter. In their human forms, this is mitigated, though blades and metal weaponry they have little defense against.

Moon-Chained As the moon waxes and wanes, so too do the tell-tale signs of a weredragon's draconic nature. Talons grow, teeth become fangs, and sometimes other traits appear, such as tails and horns, and rarely wings. Under the light of a full moon or moons, they are forced to shift to their dragon forms until the moon sets. Afterwards, their draconic features will fade so long as the moon or moons are not waxing. Some who live in Realms with multiple moons gain some tolerance for this, and may only react to a single moon, but this is rare.

Weredragons tend to be mostly carnivorous, with a strong preference for the finest foods they can get. White meat, particularly the wings, is an especially luxurious dish among weredragons. Only rarely will they indulge in any plantlife, and when they do, it's often used as a garnish for other foods.

Appearance Weredragons have two distinct forms; their humanoid form and their dragonform. When approaching a full moon, their features will slowly change, and the two forms will blend. What features show up and how differs from individual to individual, though it cannot be controlled or banished by any natural means.

Humanoid: Their humanoid shapes often reflect what heritage they held before they or their ancestors were Changed, and can be anything from elven to orcish. Weredragon human form appearances range all across the board, and may have any skin color, hair color, and eye color. However, their culture often dictates where one may be based on appearance and bloodlines alone. Most weredragons that have any sort of wealth are refined, beautiful creatures, with well-defined features, fine clothes, and clean appearances. Those lower in class have less than pleasing looks, cast out from society at large.

Draconic: Most akin to western dragons, weredragons have six limbs in total; two wings, two arms, and two legs. Unlike in their humanoid form, weredragons’ draconic forms are lackluster and dull compared to true dragons, their colors muted and bland. Most are covered in thick hide, and those lucky enough to have scales do not scintillate with light, matte and rough to the touch. Weredragons never have wings that may achieve true flight; they are all vestigial, and can be used for gliding, nothing more.

Culture Most weredragons live in seclusion; their cities are well-guarded and well-hidden, located in places most other species cannot go. While some are more well known and accessible than others - such as the city of Mordue - many have locations that are not found on any map. They are protective of their kind, and very aware of their own mortality. They are not immortal, and while they live long lives, the knowledge that their lives will one day end weighs heavily on their minds. While they remain hale and hearty for most of their lives, when age starts to take its toll, it generally happens suddenly and harshly. This fact leads most weredragons to pursue rather hedonistic lifestyles, while a fair number seek true immortality.

Despite this - or perhaps because of it - weredragons celebrate life while they can. They enjoy all the prestigious joys the worlds have to offer, hold feasts and parties, and treat one another to extravagant wealth and beauty. Courtship between two weredragons is a spectacle of finery and opulence, with pairbonding rituals that may extend into celebrations lasting weeks. However, there is a black mark on their aristocratic way of life; the weredragon as a race is very vain, and those that do not live up to their expectations of beauty are often pushed out of their society and trod upon. The ugliest of weredragons are treated no better than unwanted pets, fed and watered but often otherwise kept out of sight. Some live on the streets or in other places in the Realms, far from where their race may ridicule and hurt them.

All weredragons are moon-chained, as well; their appearances change with the phases of the moon or moons in any given Realm, and those times beneath the full moon are often the quietest among their cities. Those that must travel while in dragonform may decorate themselves with a multitude of jewels, though never metal. Pure metals are toxic to various degrees to weredragons in their dragonforms, and it is a well-known fact that any were approaching a moon-change must remove all metal piercings, chains, jewelry, armor, etc before their full form is taken, or else risk becoming sick.

Abilities In both forms, weredragons are very physically strong and fast. Their affinity for magic is as broad of a spectrum as their draconic cousins; within reason, no ability or affinity is beyond a weredragon's reach. In-between forms has a variety of different effects on their magic and strength, differing by individual.

They may bite in either form, and these bites are particularly nasty, as their saliva carries the same bacteria which may change another humanoid race into their own. Anyone bitten by them runs the risk of falling victim to the same condition. Once the Change has completely taken hold, it cannot be cured.

Humanoid: Through adolescence on, weredragons in their humanoid forms are commonly stronger, faster, as well as more agile. They may heft many things humanoids of similar size could not, jump higher distances, and execute sharp maneuvers on the ground. Magically, they are less adept in this form than their dragonform, but still quite powerful.

Draconic: In their draconic forms, weredragons are granted with the advantage of taloned hands and sharp fangs, thick hide, and horns. In addition to heightened senses and greater strength, they are more magically adept than their humanoid forms, and often focus their magic as breath-weapons for ease of use.

Rarely, some weredragons suffer from sporadic bouts of rage in their dragonforms. In these rages, they become aggressively defensive and prone to violence over the smallest of offenses, lashing out at even close friends without hesitation. The adrenaline running through their bodies grants them greater strength and a spike in pain tolerance, but they lose all reason until it fades.

While the Ten were reluctant to face Death directly, they were quick to create more species to join the fight against the powerful god. Fenrir took L’zayn and met with Gaz’in and Leartes to discuss creating a new species with the ability to shift forms, a way to bridge the gap between humanoid creatures, and non-humanoids. Gaz’in suggested the big cat, while Leartes proposed the wolf. Fenrir and L’zayn, however, were both set on using the dragon, for no other creatures rivaled the dragon’s power and majesty.

Neither Gaz’in or Leartes were willing to yield their opinions, and left L’zayn and Fenrir to work on their creation alone. The two gods ventured into the mountains, where they found a small clan of humans. They took the clan leader, and blessed him with the ability to take on the form of a dragon with two heads, and scales of red, blue and gold, as well as great beauty and physical ability in either form.

Once they were pleased with the first weredragon, Fenrir and L’zayn blessed the rest of the clan in a similar manner, though the rest more more muted scales. Although few in number, the weredragons swiftly made good use of their new powers to gain dominance over the mountains, making within them a mighty stronghold for themselves that few would dare to try to breach.

This Ancient First was a half-humanoid, half-dragon with two heads, and an array of red, ice blue, and gold scales covering their form. They were a hot-tempered, yet cooly calculated singular entity which employed dragonbreath - one so hot it rivaled that of volcanoes, the other cold enough to seal those same volcanoes with a sheet of ice. They also had control over fire and ice.