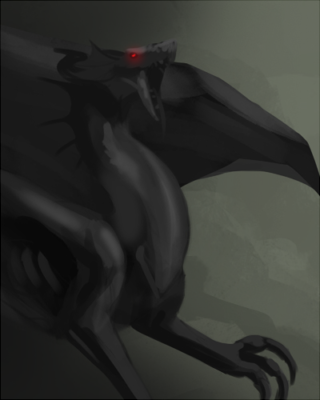 The sarka is said to have once been descended from the result of the breeding of a snakekind and a dragon, though the validity of such a claim has often been called into question. They were created as a horrific mockery of dragons by Death, a dark-scaled, wraithlike monster very skilled at killing dragonkind.

The Marked Ones Elite among the sarka are those chosen by the dark gods to be their personal servants and warriors; these are the Marked Flights, the color of their markings indicating what god or goddess they serve. These markings are usually manifested as stripes or lines, most often found on the neck, back, shoulders and wings, though much more rarely they can be found on the head, tail, legs and belly. These Marked are larger and stronger than their 'godless' brethren, and often think they're superior to all other creatures beneath them, especially the un-Marked that are their brothers. Control of elements not usually found in most sarka can be harnessed by these gifted elite, though the color - be it ice, fire, water, wind, etc - is always tainted black.

Marked by Birth vs Granted the Mark There are two ways a Marked sarka may be born or created; if two elite sarka breed and produce offspring, it will result as one being born with markings as a personal servant of their parents' god. Should a Marked sarka mate with one who isn't, there is a small chance of the hatchling being born so marked. A normal sarka may also be chosen and changed by their god or goddess, given markings later in life. These Marked ones tend to be stronger than their birth-brethren, despite being weaker before.

Flights of the Marked The Dark Five's color-barred sarka are split into five different groups, indicated by the hue of their markings. Each color will match the markings of the god that they serve, though slight variations are always possible. The Bone Flight is Dhath's; colored a beige or off-white. Daecuru's is the Venom Flight, a poisonous purple. Under Gurthril's rule lay the Blood Flight, a dark red. The Fire Flight, burning orange, is Lithmor's. Last but not least is the deep amber, the color of rust, the Amber Flight belonging to Noamuth.

The De-Marked Rarely, a sarka from one of these Flights will be banished, exiled or otherwise leave the service of their god or goddess - these lose their markings over time, and they always turn immediately a deep steel grey before they fade back into black. Their elemental powers disappear, and their wounding voices will weaken even past the point of a normal sarka's. Some may suffer personal vengeance from their former god for the disgrace, and others will be tracked down and slain by those they once considered allies.

red meat, preferably from dragons or another sentient predator.

Sarka are obligate carnivores, and make little distinction when it comes to prey. They will actively hunt sapient races, and prefer dragonkind over all. While dragons are their preferred prey, they will readily hunt any other game they may find, sapient or not. Sarka will also resort to eating carrion, or cannibalize other sarka if the need is absolutely dire; these cannibal instances are often sorted by rank, with Marked preying upon un-Marked, and un-Marked preying upon de-Marked and younger sarka.

The sarka's only subspecies, the ansar, has a diet with much in common as their primary species. However, they do not hunt dragons but will go after smaller game, occasionally seeking fish or other wish white meat much more readily than their dark brethren. They are not complete obligate carnivores, and may choose an omnivorous diet that includes roots and plants. When driven to partake in carrion, they only eat the meat of sapient races with extreme reluctance.

Appearance The sarka are a breed descended from a cousin of the dragon; it is popular opinion that they are the twisted offspring of a snakekind and a dragon. Like the snakekind, sarka are blood-enemies of any and all dragons, no matter what breed or color of scale. At first fight, their dragon heritage is apparent; they are classic quadrupeds with long necks and tails, possessing leathered wings and tough scales. But despite these likenesses to their dragon cousins, there are many key differences that set them apart.

For one, their scales, which are always a shade of black from lightest ash to deepest ebony, possess no highlights at all; rather than a dragon`s scales, which glitter in the light, a sarka`s hide is dull and flatly-colored. Secondly, every sarka sports both a jagged barb at the end of a whiplike tail as well as huge, vicious talons larger than their heads; four on each paw. This race`s heads almost never differ from one sarka to the next--sharp, narrow, and bladelike, with small ears, large eyes, and a cruel, needlelike fangs. Their eyes are one of their prominent features; eerily devoid of any visible pupil, the color shifts and changes according to the sarka`s mood; red for anger, green for contentment, orange when in battle, gold for excitement, purple for {rare} compassion, and so forth. However, their wings are the most spectacular feature of a sarka`s anatomy; though batlike like many dragons`, the wing-bones are long, flexible, and almost impossible to break, and support a light silver, semitransparent web. Each wing possesses three sharp talons along the leading flight edge; yet another weapon for this vicious dragon-hunter.

Culture Sarka live for the hunt. They are a solitary race, brought together only during mating seasons and wartimes. This race almost exclusively hunts dragons, though other prey includes large carnivores and most humanoid races. Mating seasons occur every several years during Elen, the last month of the Felnovan year. During this time, sarka fight for mates, and the strongest female and male in a territory will breed, producing two and rarely three eggs in a clutch. They do not eat until the eggs hatch, protecting the brood and nest site. The male leaves halfway through the clutching period, driven away from the nest by the female lest the father kill the offspring upon hatching to eliminate future potential threats. Needless to say, sarka have little or no feelings of loyalty to family; however, these creatures have the same intelligence as a human, however brutal and animalistic they may seem.

The young hatch after around eighty days, and are already well equipped to survive on their own. The mother abandons the offspring a week after hatching, when the young sarka can hunt on the ground; after that one week, they leave the nest and hunt small things as a grounded creature for up to three years before fledging, educated from instinct how to fight and survive.

Abilities This race, descended from the ancient enemies of dragons, is highly efficient at killing dragonkind and to a lesser degree other prey of their choice, fitted by time with the weapons to destroy dragons. Though they cannot use magic or control reiatsu, their physical abilities are dangerous enough to classify them as top-class predators. These creatures possess a language of their own, as well as being able to speak the common tongue to a limited degree, but they only speak in whispers; their screeching roars have the ability to kill. Furthermore, the barbs on their tails possess a curious neurotoxin that is deadly to dragonkind and shapeshifters in the form of dragons; it numbs the senses and constricts the heart and lungs until the dragon dies in agony, unable to breathe but fully able to feel pain until the last moment. To any other race, the venom can induce a fever to last weeks.

But perhaps the most deadly weapon the sarka possesses is that which earned the nickname "Wraith Assassin". Older sarka gain the ability to phase through their prey; in dragons and dragon-shifters, this can slow and eventually stop the heart immediately. In other races, the victim is left dangerously weakened and insensate. The degree of effectiveness depends on both the length of time of exposure as well as the soul strength of the victim.

The One had fallen. Death stood triumphant. Even though the Ten survived, and fled, Death paid them no mind, secure in his own power. For if the One couldn’t face him, his remnants surely stood no chance. Instead, Death turned his eyes upon the dragons, the One’s most precious creations.

From these will I create my own chosen race, so that the One’s own creation will in turn be my triumph, Death gloated. Many dragons were taken, and molded by Death’s terrible power, and many of them died. But one endured, and became the first sarka. Her scales lost their luster, and her eyes lost their pupils even as they began to shift color with her emotions.

She was the first sarka. Her entire physical form suggested a deadly weapon, and her burning hatred and contempt for dragonkind aimed that weapon with murderous intent. To thee do I give wings that will never break, claws that can rend dragon scales, venom that will leave them dying in agony, a voice capable of tearing the very life essence from their bodies, and, greatest of all, the power to become a wraith deadly to the touch, Death proclaimed.

But from thee do I take your children, for our full blessing will be given to who we choose. Those of your kind who impress me enough will earn my blessing, and a small portion of my power, snarled Death. Bereft of her fertility, the first sarka was left with only her desire to hunt and to kill all dragonkind. She departed from Death’s presence, and began to hunt. Many fell, victims of her deadly weapons.

Pleased, Death created more sarka, and as he had pledged, he took from among them those that impressed him the most, and set his Mark upon them. These Marked Ones were soon feared by all dragonkind for their power and murderous ferocity, and to this day, no dragon will lightly face any Marked one. The first sarka was feared most of all, for her drive to hunt and kill was singular and unwavering.

The sarka have spread to many Realms, but none provoke as much fear as the first, for the sarka can live forever, and none have ever bested her in battle.

The sarka Ancient First is an exceptionally large individual, three times as big as average. Her scales are a deep, light-absorbent black, leaving her looking much like a living, solid shadow.

Dhesilkam'zova was gifted with a far more potent venom and screech than the rest of her kind, equally lethal to all races. While she has slumbered for many millennia, once every few thousand years she will awaken for a brief time despite the vigil of her Sage, hunt, and disappear unseen, back to her hidden lair to return to sleep.

The ansar, or more properly Anquil-sarka, are a subspecies of sarka that were altered by Evylon. Infused with Light, their voices lost their lethality, but none of their potency. Sometimes called singing sarka, the ansar use their voices to calm, and in some cases, heal others. It is rumored that even the deepest mental or spiritual wounds can be cured by listening to the songs of the ansar. While older ones can still phase, the phased ansar's passing causes disorientation, or complete unconsciousness. Their once-murky scales now gleam like obsidian, and their spines, spikes, claws, horns, and wing membranes all glow with a soft light. Several ansar have started to display swathes and patterns of white scales, and some are entirely white, although this is rare. They have lost their innate hatred for dragons entirely.