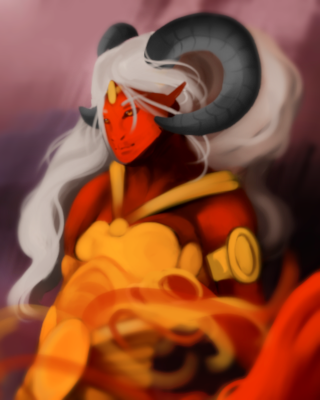 The jinn are a humanoid species divided into four distinct Clans, each with their own appearances and specialties. However, despite these differences, all jinn are bound from birth to an otherwise mundane item that is nearby, and infant jinn without access to such items die swiftly. They are bound to these items until they achieve their freedom, which can only be won through granting wishes.

Wish-Granting and Freedom All jinn are bound to an object at birth in order to survive, and are unable to move away from said object more than a set distance. The greater the power of the jinn, the further this distance is, but even the strongest are unable to move so far away that the object is out of their line of sight. They are unable to move the object themselves, but an unbound jinn or another creature may.

To break this bond, a jinn must grant a number of wishes. Only when these wishes are granted will the binding be undone, and the jinn given the freedom to travel as they will, though without the ability to grant any more wishes. They cannot grant wishes for themselves, or for another jinn; nor can they grant a wish setting themselves free, even if another creature were to wish it.

While the wishes granted by a jinn can be quite powerful, they are unable to perform feats of power beyond the scope of whatever power they possess. A particularly strong jinn might be able to grant a powerful blessing, bestow a particularly nasty curse, or cause widespread destruction, but most lack that amount of power.

Appearance Jann: Bestial jinn, usually four-legged, with physical traits derived from most any other bestial creature, sometimes in a wild mix, such as horns, fangs, tusks, fur, scales, etc. Like all jinn, they can be any color, though they have long tails comprised of whatever elemental energy they wield instead of energy replacing their hindquarters. Jann very rarely adorn their bodies with decorations, though some may wear necklaces or bangles.

Ifrit Humanoid jinn with skin of near any color, but possessed of bestial features, usually on their heads; they also commonly sport sharp claws or long talons on their hands. Their eyes are often reflective, making them shine in the dark. From the waist down, their bodies are comprised of elemental energy, or in rarer cases, reiatsu. Most Ifrit jinn disdain wearing much by way of clothes, aside from a sash around their waist, though most adorn themselves with jewelry.

Ghul: The Ghul are humanoid jinn who come in a wide variety of colors, of average height, but thick builds and broad features. They tend to dress much like sol'tera do, and tend to adorn themselves with fancy jewelry. Some tend to wear curved, decorative knives at their waists, but these are mainly used for utilitarian purposes instead of fighting. From the waist down, their bodies are comprised of elemental energy or pure reiatsu.

Marid: Tall, beautiful jinn who prefer to adorn themselves in the finest of clothing, and the most valuable of jewelry. Their skin tones are as varied as that of the rest of their kin. It's common for Marid jinn to carry finely-crafted Ristellan blades, often with bejeweled hilts, while their clothing and jewelry styles tend to emphasize their looks and builds. From the waist down, their bodies are most commonly comprised of pure reiatsu, with elemental bodies being more rare.

Culture Most jinn arrange for various items of value, or at least pleasing aesthetic, to be on hand for the birth of their children. While it has no impact on their abilities, jinn as a whole tend to look down upon those who have the misfortune to be bound to something mundane, such as a bland tool, piece of everyday pottery, or a common rock.

Jann: Jann favor relatively plain objects to bind their children to that can easily be carried by an unbound Jann. These jinn tend to live in packs, and often travel through areas where their bound members can grant wishes to those they may pass during their wanderings. Unbound Jann jinn tend to leave the objects they were bound to behind. The eldest of the unbound lead these packs, while the bound have no real say in pack affairs.

Ifrit: Ifrit tend to form loose clans within the greater Clan of Ifrit. They prefer to bind their children to jewelry that can easily be worn. They often find work as bodyguards, or protectors of sol'tera families while bound. Unbound Ifrit jinn usually serve as mercenaries or caravan guards. Ifrit jinn tend to keep the objects they were bound to in order to pass them down to any children they may have. Unbound Ifrit measure their status by the deeds they have performed since being freed.

Ghul: Ghul tend to be more settled than their Jann and Ifrit brethren, often forming small communities within cities. Bound Ghul jinn tend to wander the streets or between cities, advertising their services, while the unbound tend to be more sedentary. Communities are headed by the most respected of the unbound, while any Ghul are free to move between communities as they please. Ghul tend to keep the objects they were bound to both for sentimental value, and as a way to remember the lives of servitude they once lived.

Marid: Marid are often capricious in the wishes they grant, interpreting things to amuse themselves, and as a way to defy the servitude they are cursed to endure. However, if they encounter anyone who is wise or witty enough to get exactly what they want out of a Marid, they will often win the jinn's grudging respect. Marid jinn are more likely to strike out on their own than form communities, after being unbound. Bound Marid tend to offer their services to nobles and other wealthy individuals. Marid are prone to destroying the objects they were once bound to after being freed.

Abilities All jinn are born with the ability to grant wishes made by other creatures, even when granting such wishes are normally beyond the powers and abilities they were born with. Each Clan specializes in a specific type of wish-granting, and differ in how many wishes they must grant before being freed.

Jann are typically the weakest in overall power, but usually the strongest and fiercest, relying mainly on their physical prowess and natural weapons in a fight. They also have potent elemental abilities. All Jann must grant four wishes before gaining their freedom, and their wishes typically fall under natural blessings of varying sorts.

Ifrit are strong and proud, skilled with elemental magics though their claws and other natural weapons make them fierce opponents in melee as well, especially when they combine elemental magics with physical attacks. The Ifrit must grant five wishes, usually related to elements, to win their freedom. They are the strongest of the humanoid jinn.

Ghul tend to be jovial and charismatic, level headed, and calculating. They possess potent mental powers which they rely on over physical confrontations, though they can mix their mental powers with blade-work in a deadly combination. Ghul must grant five wishes before being unbound, and these wishes typically revolve around the mind.

Marid are the most magically powerful of the jinn, and the most prone to rebelling against their bound states of all their race. Since they are unable to use their power to break their binding, they tend to develop cunning, devious minds so they can outwit those who would demand wishes of them. However, as they must grant six wishes before gaining their freedom, they stop short at outright refusing to grant wishes. These wishes are most often related to the soul.

The jinn were originally elementals taken by demons and corrupted into new creatures, half elemental, half flesh and blood, formed of a fusion between the captured elementals and humanoid slaves taken to Kurai. These beings, called jinn, were meant to be powerful slaves, bound to the service of their demon masters. For a time, that's all they were.

However, unintentionally, a way for the jinn to escape their bondage emerged. At first, these free jinn were ignored, overlooked as they were deemed too weak to pose a true threat. However, over time, the numbers of the unbound continued to grow, among them an increasing number of resentful Marid, who began to stir the rest of the free jinn into unrest.

Eventually, a full-scale rebellion broke out, with the jinn freeing their enslaved brethren and provoking a bloody war with the demons. Eventually, the jinn managed to fight their way free of Kurai, but not before the reigning demon king cursed them to forever be bound to items symbolizing their status as slaves. They had won their freedom, but at a heavy cost.

They settled on Ristell, living among the sol'tera in the desert, but were greatly feared at first due to their outlandish appearances. It was many years before the first of them began to earn their freedom, and many more years before they began to truly integrate into Ristellian society.