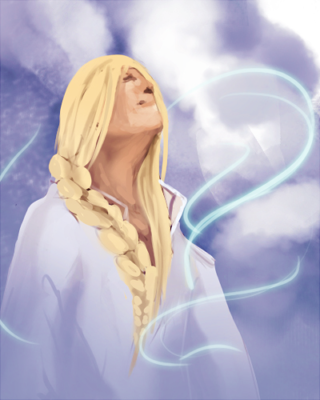 A people in Evylon who hold purity and good over all. Fair-skinned and tall, they are considered almost as beautiful a the elves that they live alongside. They specialize in light magic, and hold special connections with the Ethers, and many become paladins, clerics, and other such figures. They actively hunt down and destroy 'dark' creatures, such as demons, snakekind, and the undead.

The Valkyries A segment of Imperials dedicated to the elimination of the Fallen, and those dissenters who seek to disrupt their pure society. They hunt down those who oppose them in absolute secrecy, and eliminate dark threats before they are made public. Regarded as the elite of the Halgian Empire's forces.

Elf Hybrids Due to their similarities with the elves, they often pairbond and form ties between the two species, with children being called the dawnlings. Most often, dawnlings will be gifted with light magic, though appearance and other such powers are left to the individual. They are usually physically stronger than most pure Halgians.

Due to the constant magestorms in the Halgian Empire, all meat tends to be more expensive, particularly red meat, except during certain annual festivals. Most Halgians make do with fruits, vegetables, cheese, and bread, with fish or fowl for special occasions. Small forms of agriculture may exist in larger cities protected from the storms by barriers, though large animals are restricted to horses in specified stables, not used for food. Small farm animals, like chickens and goats, are more common, though in much smaller numbers than in a place with lots of farmland. Hunting wildlife amid the magestorms is strictly regulated, and not often used for food due to the contamination the storms create.

The Fallen have a similar diet to the Halgians, though meat is not quite so rare or expensive, aside from shellfish. They do not use horses often, and thus their small city-protected farms may contain a limited population of cows and other larger animals. They have also developed ways to purify the meat of wildlife hunted outside of their settlements, by way of their Black dragons.

Appearance Halgians are tall and fair skinned, with pale hair and eyes that may come in a variety of colors. Generally, this cousin-species of the human is built more wiry, muscular and thin, with little variation thereof. Unique to those of Halgia, they rarely scar, and injuries generally heal with little to no mark.

According to their culture, it is forbidden to wear dark colors, save for mourning. Most often, the Halgian people will wear light, flowing garb in pale tones, white being predominant. They are fond of delicate jewelry, and long, flowing cloaks and dresses with limited ornamentation. All carry ceremonial daggers made of a variant of mithril called divine metal, white in color, and blessed with enchantments that vary by individual. Armor - worn by most, male and female both, in times of war - is made of the same, white metal decorated in silver or gold. Mithril and platinum are used rarely, as are silver and gold. Generally, armor will be stylized like feathered wings, leaves, or floral designs; smooth and flowing, never jagged or spiked.

Culture Strong and pure, Halgian society holds the Light above all. They actively detest the Dark, and their race as a whole seeks to push darkness from the world. Led by an Emperor (or Empress) chosen by the people, those of Halgia train long and hard in the art of the sword, as well as magecraft, healing, and purification rituals. Their clerics and healers are considered to be blessed by the Ethers, and their paladins made champions of the Gods of Light. They worship both gods and Ethers, and Lady Daama over all, considering her a goddess of light.

Cities in Halgia, and those of the Halgian people, are run by tribunal councils and an elected King or Queen. This King will oversee all of the city's workings, and is answerable both to the Emperor, the Council, and the people who elected them. This council keeps watch over economics, various mercantile business, and the comings and goings of all visitors and immigrants. The King himself, though the authority on all important decisions and the making of policies, is expected to take wisdom from both the tribunals and his normal citizenry, lest the people push him from office. Halgian military is governed by both the Emperor and the King, split into small armies called each with a guardian animal and a specific name. The Halgian military as a whole is dedicated to upholding their view of the world as a whole; that of distinct differences between what is Light and what is Dark, those species pure enough to live and those marked to be hunted down and slain. They believe that all who do not follow their beliefs are cursed, and see them as doomed to an eternity in Hell beneath the Lord Megiddo. Their strong military presence has a direct impact on the citizens' culture, and assimilation into their religious system is all but impossible to avoid.

The leaders of this military are referred to as the Imperials; paladins of an elite class, these are often dragonriders who have eared the trust and companionship of a strong-hearted Heartwoodian Gold or Silver. Beneath them are the centurions, knight-class soldiers who then governed smaller companies of footsoldiers who held various lesser ranks. Specific to the Silver Eagles in the city of Glory, many centurions have gryphon mounts, and will fly at the wingtips of their Imperial leaders.

Those who do not accept Halgian beliefs, or those who have begun to question them, will be hunted down and held to trial by the Imperial forces; if they do not repent their sins and rejoin the Light, they will be executed, either publicly or somewhere in private. It is known that, should dissent be made known, those dissenters will promptly disappear. Their society is kept pure, their devotion to the Light and hatred of the Dark held strong.

Abilities Gifted with a unique sense of light and darkness, Halgian folk are able to detect dark species, and those with dark intentions, with little effort. However, though they're trained from childhood on how to sense darkness, their aptitude in detecting light species, and those dark races with good individuals, is severely limited; thus, they are unable to perceive that not all dark races are evil, unless shown direct evidence.

Most Halgians are skilled in light magic and healing, and trained well in purification rituals. The healers of Halgia are considered the best and strongest in many Realms, and those clerics - healers who have a special connection with the gods, Ethers, and spirits - are stronger still. Summoners of light creatures exist who shape their powers into a call to creatures pure of heart, so that those beasts may aid them in battle.

All Halgians will have reiatsu pale in color, save for the Fallen, who may be found with darker colored auras. Pure white auras are considered divine, as they signify a direct connection with the Ethers, and such figures are held with great regard. Most, if not all, Emperors are gifted with such white auras.

In the early days of Evylon, much of Evylon was unsafe to live in. Many wild beasts, altered by the Realm’s magestorms, were driven by bloodlust as much by the desire to hunt, and many creatures were fallen to darkness, either willingly, or turned by the great storms. However, there existed a small kingdom of humans, living on the frontier of safely-inhabitable land, who remained stalwartly devoted to the light.

One of these, a woman named Halgiana, who came from no great background, and possessed of no great power, stood out among them for her simple, unyielding determination. It was to her that the ancient gods appeared, and it was she who received their blessing. She was to be a beacon of light and hope to her people, and lead them into strength and prosperity. She knelt before them as a mere human, but when she arose, filled with power and purpose, she was the first of her kind, Halgian, mother of a new species.

She found she was able to share the blessing she had received, and she raised many of ehr people up from being humble humans to proud Halgians, and before long she had a sizable army at her command. Driven by her will, the Halgians traveled a land wracked by magestorms, and formed the basis for the Halgian Empire.

Now, Halgiana herself has long since passed on, but her legacy remains strong, and true. The empire that bears her namesake remains powerful, and a stalwart bastion against the dark, and all its creatures. Her people are widely seen as paragons of virtue, and remain steadfastly loyal to serving the light.

The Fallen are an offshoot of Halgians who have turned away from their brethren's rigid devotion to the Light. The first of the Fallen appeared early in the history of the Halgian Empire, and questioned the notion that dark creatures were inherently evil. After they refused to be silenced, most of them were rounded up, tried, and executed for treason. Those who managed to escape were pursued, but eluded capture when a Heartwoodian Black sheltered them from discovery, just to spite the Golds and Silvers among the pursuing forces.

The Fallen subsequently built a strong fortress, concealed from view within a raging mage-storm, kept safe by powerful magic. To differentiate themselves from the Halgians who would see them all dead, and to honor the Black who sheltered them, they wear darker colors, with black being highly common, with dark purples, blues, and reds closely following. While some of them retain their connection to Light magic, most have developed connections to the Dark.

To further honor the Black, the elite Fallen wear black armor, and call themselves Dragon Knights. These elite defenders of the Fallen often clash with the Valkyries, striking forth from their hidden fortress before disappearing again. A close bond has formed between the Dragon Knights and the Heartwoodian Blacks near their fortress, and some of the Knights ride to battle on the backs of the Black dragons.