By Tooth And Claw Dragons
THE LIGHT REALM, Land of Brightness

The Light Realm is a shimmering, bright Realm that's plants, animals, soil and stone all glow with an inner light. Its sun is a cool white where the sky is a pale gold, stars twinkling in its vast expanse even in the daytime. At night, these stars are much brighter, twinkling in a field of shifting purples and blues, where the dawn is met with a bright magenta radiance.

Bordered by the mountains and holding the Gods' Tower in its midst, the Light Realm is governed by the Council of Three in the Golden North, entrusted with the guidance and foresight of the gods. The Dark Five and their allies have no power here, and the aura of the northern Realm is said to purify evil souls. 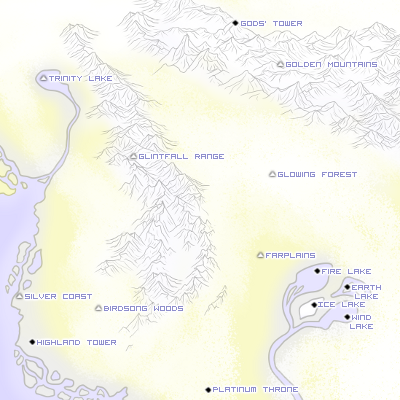 These are the cities found within this area; each one is marked on the map, and divided by tiers. The larger the tier, the larger the city - tier one may be a small village or town, while tier four may be sprawling cities of grand proportions. In the Lightrealm, most cities are built as Towers, and are called thus.

RACE: none. LEADER: Council of Three. TIER: none.
LANGUAGE(S): Common. ALLEGIANCE: None.

APPEARANCE: The Gods' Tower is a massive arrangement of eleven towers, ten arranged in a vast circle around a larger central tower. The ten outer towers are each dedicated to one of the Ten; the Five of Felnova, and the Five of Millirand, while the central tower is dedicated to the One. The towers are made of a gleaming white stone which glows with an ethereal beauty. The gates are each lined with gleaming gold, and large enough to accommodate even the largest Orthae. At the top of the central tower, statues of the Ten stand in a circle, their assorted colors a bold contrast to the gleaming white stone. These statues all look downwards, where a shimmering pool of water lay, a window into other Realms.

The Tower of the Gods is one led by a three-pronged Council governed by the gods. This Council is comprised of three ancient and powerful Lightbeasts, who keep a careful watch over the balances of the worlds.

APPEARANCE: Highland Tower takes the form of a single tower, towering high into the air, over-topping the other towers by a fair margin. Ten large balconies wrap around the exterior, and the tower section above is slightly smaller than the section below each balcony, giving the tower a tapering appearance. The stones shimmer brightly, gathering the light of the Realm and absorbing the radiance of the sun, stars and moon. It shines as a beacon at night, and its bright walls can even be seen over great distances in the daytime.

APPEARANCE: The Platinum Throne is comprised of three smaller towers conjoined to a massive central tower, each serving as a gatehouse dedicated to one of three Spirit Kings. A muted gold arch marks the Ghost Gate, pure white for the Soul Gate, and silver subtly tinged with red for Hell Gate. The central tower houses the Platinum Throne itself, a gleaming construction forged from pure platinum. While it still stands strong, parts of this tower have crumbled, and a subtle, melancholy shade of blue almost lost within its original white, marks its outer walls. The Throne itself is dedicated to the Highlord, Spirit King of the Highrealm, where he may gather the other Kings in meetings of great importance.

Named for the unending chorus of birds which add to the eternal song they sing. Birds of all shapes, sizes, and species add to the melody, which is said to have started the day the birds first came to the realm, and never ceased since. The trees themselves are mainly various shades of white and gold, with a few blue tinges here and there, and the wildlife glows with a particular golden brilliance.

Named for the thick deposits of golden soil within its waters. Murkiest of the four lakes, the waters are still a sight to behold, glowing with the light of the golden silt marking the watery depths. Despite being one of the darkest places on the Realm, the waters are still brighter than many normal lakes on other realms.

White-gold flames burn constantly upon the surface of this lake, which is a bright, pale blue color. The water itself, purified by the flames burning atop it, can be used to cleanse wounds as effectively as many elixirs crafted in other realms.

A frozen surface strong enough for an Orthae Lightbeast to walk on caps this lake, and a constant cool wind sweeps across its surface. The ice is quite clear, as is the water beneath, allowing someone to see all the way to the lake bed.

A wind-swept body of water. Its surface is constantly in motion, directed by the whims of the wind. The winds cause strange, but wondrous, effects, including whirlpools, strange tides and waves at odds with what one might expect, and tendrils of water rising in the grip of small, swirling winds farther out upon the depths. Occasionally, a large whirlwind will form near the center of the lake, and conjure a brief waterspout with no clouds overhead.

A large field of golden grasses which lightly sway in a gentle breeze. Here and there, small, pale blue flowers rise above the golden grass. The Fire, Ice, earth, and Wind Lakes all lie within this large plain. Pools of rainwater gather here that lightbeasts use to scry with, mimicking those found in the Farplane and Spirit Realms.

Massively large, somewhat crescent-shaped for a mountain range, the Glintfalls are primarily colored in shades of white, with gold and pale blue pinpoints mottling their surface, shining brilliantly. Not as tall a range as the Golden Mountains, they are smoother-sloped, and easier to climb.

Discovered as a thick forest of brilliantly glowing white trees with golden foliage. Everything, from the tree trunks to the leaves, glows with its own light. Even the forest floor glows with innate light. In stark contrast to the Birdsong Woods, the Glowing Forest is much more silent, though no less alive. Within the southernmost reaches of the forest stands the Platinum Throne.

A vast mountain range, named for the myriad shades of gold the mountains are made of. Visible from the Platinum Throne to the south, they are home to the Gods' Tower, and are the source of the golden decorations found within all three towers. They mark the border to the Golden North, a vast country governed by the all-seeing Gods' Tower, and are guarded by a variety of lightbeasts big and small.

Vast and all-encompassing is the Silver Coast; a coastal expanse of bright, silver sands which glitter in the reflected light of the Realm. The waves roll in gently, competing with the neverending song of the birds in the nearby forest. Rising from the silver sands is Highland Tower.

The shores of this lake are a frequent destination for Lightbeasts to come when they want to relax and bask in the glory of their gods. The lake-bed shines with a brilliance that rivals the suns overhead, and the peaceful aura that emanates from within aids healing wounds and injuries, and calming troubled minds.


About the Light and Dark Realms

The Light and Dark Realms are the most ancient of all Realms, and are a centerpoint for both the creation of new Realms as well as the balance within the Void hydra in which they exist. It's theorized that other Dark and Light Realms exist within all Voids, contributing to the balance of each - and that they are somehow pivotal to these hydras' survival. When a Realm is created, its essence first passes through both Light and Dark, gifted balance from each and the ability to exist in the Void it is birthed into. No Dark nor Light Realms have Markers, and exist deep within the hydra itself. Despite this, portal travel to them is still possible, and is thought to be a result of a Core that acts like a giant Marker in itself.