By Tooth And Claw Dragons
MYRLANDS, Land of the Wolf

So named the Country of the Wolves due to the packs that claim its bountiful territory. Home to the wolves of the Myr, and also the forsaken homeland of the Vehn, it is a country every bit as big as Vystriana, and untouched by any sort of real civilization. The wolves pride themselves on their homeland, and protect it fiercely form all threats. 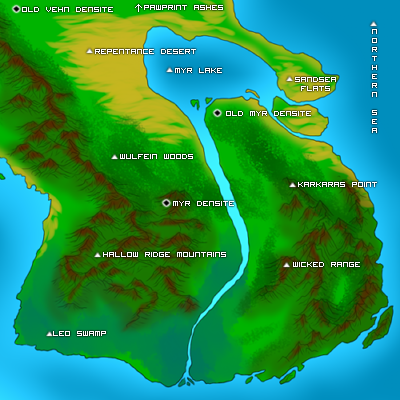 APPEARANCE: Sheltered on three sides by tall, rocky cliffs, the Myr dens are dug into existing caves set in a semicircle of overhanging stone. The narrow entrance is bordered by thick bramble, and guarded by one of the Elite at all times. The largest den, set slightly off-center and marked by two slabs of stone, belongs to the Vhalen and his mate. On the opposite side is a pile of jumbled rocks where the pups like to play, as well as a zigzagging pathway to the top of the cliffs. The den faces east.

RACE: none. LEADER: none.
LANGUAGE(S): none. ALLEGIANCE: none.

APPEARANCE: Since abandoned, the old Myr densite was a collection of dens dug into the bases of ancient trees alongside the Myr Lake. Now, most of the dens have since washed away or been overgrown - no wolves populate its shores any longer.

APPEARANCE: Once part of the original Vehn densite, the Ashes have since fallen into ruin. Said to be the original place where the First Summoning occurred, a wasteland is all that remains. Bones lay scattered about old caverns that continuously smolder, sending smoke spiraling high into the air no matter what the weather may be. Famine run rampant here, as well as bloodwolves and outcasted hellwolves who've left Kurai behind.

RACE: none. LEADER: none.
LANGUAGE(S): none. ALLEGIANCE: none.

APPEARANCE: One a place of peace set in a small alcove where the snow began to fall, now a place of fallen, twisted trees and charred, lifeless ground. Ice and snow cover the earth year-round now, hiding the skeletons of wolves killed by the Summoning. It's said that the Vehn have established a territory in Icemark, to the west of the ice-bound city.

Being the eastern edge of the Darklight Mountains, these also mark the western edge of the Myrlands, separating them from Vystriana. The name of "Hallow Ridge" comes from several factors. Light elemental energies are strong here, and many believe there is some sort of location of power related to this fact within the mountains, but if it exists it is not well known. There is also a shrine to the wolven god Cirrus, where many of his followers congregate regularly. Another thing, which is of unclear relation to the other two, is that spirits often find themselves drawn to the mountains, not knowing why. Some of the living fear these spirits, but most of them are not hostile, and will even aid travelers who come to the mountains for whatever reason.

A legend holds in the Myr of a wolf who fought the Final Summoning alone, without the aid of Vhalen or Vhela; the pack's leaders were too weak to stop the monster's wrath. As they led the pack away from the devastation it caused, this wolf fought it atop a jagged outcropping of stone at the very edge of the Wicked Range, meeting it blow for blow. When he was finally pushed to his limits, he used the last of his energy to shred away at the beast's soul itself, leaving it crippled and weakened enough that the Myr leaders were later able to dispatch it with ease. This valiant wolf died there, at the top of the peak, and its name is forever held in reverence among all wolves young and old.

Swamplands to the far south known for its vast population of cockatrice and feylizards, as well as the inherent danger that entering it heralds. It's said that the trees grow so tall that they block out much of the sun, leaving the greater majority of the swamp in perpetual gloom. At night, fireflies flit about, mirroring the many glowing eyes that watch intruders from the shadows, awaiting the chance to strike...

A vast and pure lake said to have water that tastes even better than the lake of the dragons in Vystriana. Surrounded by hills covered in long grass and bordered by tall, swaying reeds, it feeds what has become known as the Silver River to the south, as well as the Twin Creeks to the east.

A sea fed by currents from the High North, holding perpetually cold water and exceptional depths. The wolves of the Myrlands avoid it when at all possible, as it's home to a violent kraken, as well as deep-dwelling oceanic predators.

The largest desert in the Myrlands, and northernmost in all of Felnova. Home to two very old desert leviathans who prey on anything that attempts to cross, large or small. Once called the Howling Desert for its strong, constant, and cold winds, since renamed as it's considered one of the most dangerous places in all the Myrlands. Avoided almost as much as the Pawprint ashes, even by the sand-dwelling Desert Golds.

So named for the constant mirages that plague the area; a desert wreathed in the illusion of heat. Though the reason for such heat is currently very little understood, it's theorized that a buildup of magma comes close to the surface here, kept at bay only by a thin, yet strong, layer of bedrock.

So called for its sharp, jagged peaks and constant rockfalls. Located on a zigzagging pair of faultlines, the Range is shaken by earthquakes very, very often. Though many of these are exclusive of the mountain range itself, some of the larger magnitude travel across the Myrlands, heralding the day when the mountains split off into the sea.

A place of reverence and sacred souls. Comprised of primarily maple and aspen along the eastern borders, as well as coniferous trees such as evergreens and sugarpines near the western edge. At the bases of the largest trees, decorated wolf skulls can be found overgrown with flowers and covered in small beads, feathers and carvings. It's unknown how these skulls come to be there, but at night, wolves have reported that the eyes of such glow with flickering lights, emitting feelings of warmth and peace if approached. It is a place of peace for all packs, and any wolf is permitted within its sacred borders.

Realm of beauty; of dragons; of the elements themselves. Felnova, Kinniokza, Adduli'in: the world that balances Kurai on the ethereal scale has many names, though the draconic and elven ones are very little used. A land of wild beauty and incomparable power, and one of the most fought-for Realms in our section of the Void today. Strangely enough, Felnova's beginning was one of chaos, and its fate is tied directly to the dragon royals of Vystriana, with great and terrible consequences to hit should they be removed from power by anything but their own volition.

The atmosphere follows the same path that many of the discovered Realms do; in it lays a potent reiatsu surrounding the planet, unseen and rarely felt. It cancels out the electricity and components of anything too technological, such as the wildly advanced machines of the destroyed Earthrealm. At its heart lay the Realm's first Ether, and her purest white reiatsu flows within, invisible but in dire need. Her magic flows through the air and earth equally; when damage is done, it is repaired very quickly, letting the Realm recover in months to the normal few years.