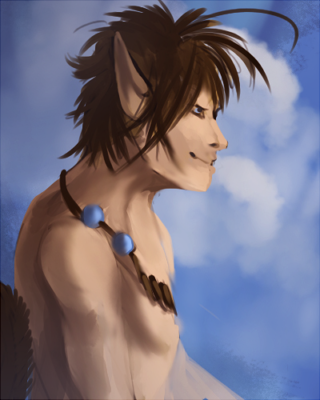 Werecats are a species that have an inherent ability to change from humanoid to feline forms and back again. They appear to gain more feline traits as the full moon approaches, and lose these traits as the new moon falls upon the world; however, some may learn to shift at any time, though these transformations are known to be very painful. They are incredibly strong and deadly, especially to dragons and draconian species.

Transformation The transformations of a werecat are usually tied to the moon, but unlike werewolves or vampires, it is difficult to pass on their werecat abilities. A werecat must not only bite the victim, but their bite must also fester. The victim will then experience a severe fever, and when it has passed, the infection will have been burned out, and the individual will then begin feeling the effects of the moon.

After the first full moon's complete transformation, the bitten individual will be considered a full and true werecat, and the curse cannot be reversed. Some of the more experienced are able to break the chains of the moon and can transform whenever they want, though the transformations will always carry some degree of discomfort.

Dragon Hunters Because of their strong fangs and claws, werecats are regularly employed as dragon hunters. Some have even developed a taste for dragon meat and will hunt dragons and draconian species for meals instead of pay. Dragons and their cousins have thus become more stand-offish towards them, and most consider all werecats as enemies.

red meat and white meat; fish of all kinds. cooked and prepared food.

Like their distant cousins, the werewolf, what a werecat can eat would largely depend on the form they are in. Their humanoid form can stomach the diet of a human-like omnivore, including prepared foods and cooked meals, but during their feline moonshift will crave fresh prey and raw meats. Due to their easily addictive pallets, some that hunt dragons may even develop a taste and stomach for dragon meat and become prey-dependent on sapient draconian races, unwilling to hunt anything else despite the inherent danger of dragonslaying. These individuals may stoop to preying on feylizards if their hunts are unsuccessful for too long, but claim it doesn't taste quite the same.

The only werecat subspecies, felris, stick to heavy red meat-based diets and tend to hunt for greatly varied prey. Felris do not target sapient races as a general rule, as they lack the dragonkilling inherent in their parent species, though they will prey on feys if the opportunity presents itself. They are very fond of fish and fowl, and it is said that one may gain a forever friend in a felris if an offer of cooked tuna is made.

Appearance Werecats are humanoids who turn into large, quadrupedal cats under the light of the full moon; their traditional forms may resemble any humanoid race including elves, humans, dwarves, and others. Under a new moon, a werecat may blend with their humanoid fellows, but as the full moon approaches, they acquire more feline traits. For about a week before and after the full moon, they may sport ears, tails, fangs, and/or a thin coat of fur.

Feline forms can be of any appearance, both in build and coat pattern from domesticated and felidae to large and prehistoric cats. The size of a werecat's feline form is directly related to their humanoid age; a child will turn into a smaller version of their feline, while an adult will be larger. In both forms, a werecat will keep its eye color, and any fur that grows before the total shift at the full moon will be the same hue.

Culture Werecats are fickle creatures. Most observed will regularly feign wisdom, but this is usually to disguise true ignorance. They are a rather solitary race, and hunting is usually carried out alone. Some may resort to attacking others out of boredom, while others readily mix with other species.

Those who hunt and are hired to hunt keep tokens as trophies. The more impressive the trophy, the more respected the individual. These trophies may include teeth, scales, hides, heads, claws, or other such pieces of their hunt, decorated to the individual's preference. Repeated trophies are turned into trinkets, which are then sold in general markets for those inclined.

Typically, if a werecat recognizes another of their kind, they will often greet each other. If the werecat's feline form is of some type of domestic cat, then the greeting will be similar to a purr even in humanoid form. Those with a larger form incapable of purring will chuff at their fellows instead. Chuffing is a kind of stuttered exhalation used by larger cats in place of the typical purr.

Abilities Werecats are able to use their natural claws and fangs to devastating effect. Since they are strong enough to cut a dragon's hide, not much can withstand their feline attacks. The natural ability to turn another creature into a werecat can only be utilized in cat shape, and can be passed only via bite.

Their humanoid forms may lack these natural weapons, but they are also exceptionally strong, no matter the form they are in. Both forms are able to speak, and many may be able to master multiple languages. Werecats in their humanoid forms also experience increased abilities to see in low light levels as well as a sharpening of senses like hearing, smell, and taste. In general, werecats are masters of stealth in both forms.

Intent on creating a powerful new species to help the Ten oppose Death, Gaz’in met with Leartes, L’zayn, and Fenrir to discuss how best to proceed. While Leartes proposed the wolf, and L’zayn and Fenrir both were strong supporters of using the dragon as the base, Gaz’in suggested using the big cat for its strength, stealth, and cunning.

When they failed to reach any kind of agreement, Gaz’in left on his own, and ventured deep into the plains. There, he came upon a nomadic tribe of hunters. He took the most cunning of these, and blessed her with the power to change her form to that of a great cat the color of the dry grass, and keener sense. When he was satisfied with the first werecat, he blessed the first kill she made in her feline form, then bade the rest of the tribe eat of the kill.

They ate, and by the light of the moon, they too gained the power to shift into felne forms. They grew less dependent upon one another, but with their newly increased capabilities, they were much more capable of taking care of themselves than before. It wasn’t long before they spread out across the plains, and established the grasslands as their own domain.

This Ancient First was a half-humanoid, half-cat with an array of dark brown leopard spots on a golden tan-furred hide. She was a malicious, mischievous being who had razor sharp fangs and claws, able to cleave steel and ore with ease. She also had control over wind.

A unique race of bipedal feline most closely related to the werecat, having developed much like the werewolves' worgen breed. Unlike werecats, they do not have a human form they can shift into. Generally tall and well-proportioned in build, these creatures have the body shape of a human, and are most often covered in fur (thick, long fur or short fur depends on the individual). Their fur color ranges widely, as does the specific build and/or type of cat, though most will have a very feline face with a full muzzle, catlike eyes, and complete feline ears. They are a primarily nomadic race, specializing in a variety of tasks, and can be found in any Realm. Groups of these creatures numbering more than ten are very rare, and can usually be found inside of large cities where they take likeminded jobs or similar careers. Felris cannot change others into felris or werecats.