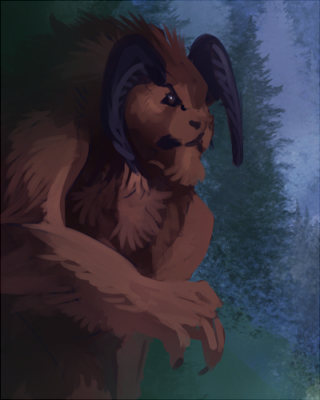 Werebeasts are creatures once created by the Dark Five to combat the Light-created werecreatures, and come in two variants; Original, and New. Original werebeasts are large, faintly bipedal creatures, with lionlike and gorilla features, sharp claws and multiple spikes. New werebeasts can transform into the animal affinity they have, and are generally called by their animal (such as weresnake, wereboar, werefox, etc).

Origin Details Original werebeasts were created by the Dark Five as twisted mockeries of werewolves, weredragons, and werecats; they were once very numerous in the First Realm and Millirand, though the War of the Weres all but destroyed their numbers, forcing them into hiding.

New werebeasts began to become more numerous than the Originals for a while, though both have had recent numbers bolstered in the last few hundred years. Now, both Originals and News are becoming less and less rare, and may be seen here and there in various Realms.

Werebeasts are generally omnivorous, though the original strain tend more heavily towards active hunting, shunning a more vegetarian diet where live prey is available. The newer variety tend towards a more balanced diet which depends heavily upon their animal affinity, and where they choose to live.

Appearance Original: Original werebeasts are furred, twisted creatures that are faintly bipedal, almost gorilla in shape. They can often be found with more leonine faces, lots of spikes, large talons and thick manes. An original werebeast cannot transform into a fully human form, but may become more humanoid and less bestial. In such forms, they may resemble odd-looking felris or more feline worgen, though may or may not lose their horns upon shifting. They can be of any fur color with any fur and skin patterns, and can have any color eyes. Bioluminescence is an uncommon trait, though eyes have been noted to glow brightly in dim light and full darkness.

New: New werebeasts often look like their parent humanoid species, until shifting; then, they will transform into either a quadrupedal or bipedal version of their animal affinity. These werebeasts can range from a mouse to an elephant, bird to fish, and any animal in-between. Most New werebeasts are referred to by their affinity only: such as werebear, weresnake, werepig, etc.

Culture Original: Created by the Dark Five, Original werebeasts live in small, hidden tribes that are often secluded in old ruins or underground caverns. They are seen as a monstrosity by the light-created wereanimals (weredragons, werewolves, and werecats), and are actively hunted by them. Among their own kind, they are relatively docile, intelligent, and protective - but an unclaimed and tribeless Original can be very dangerous, to the point of being recklessly violent, uncontrollable, and unpredictable. Tribes are ritualistic and close-knit, simply built, and led by a single leader called the Fang-Chief. Shamans and Seers are revered, and often hold high ranks, as are hunters and warriors. Those who provide for the tribe are respected greatly.

New: New werebeasts do not usually congregate together unless to breed, though many take non-werebeast mates that render varied children. They are very often mistaken for shapeshifters, and can intermingle with various societies at will. Very commonly, a New werebeast will be affected by the moon or moons of a Realm, and have an overbearing urge to shift that is only sated when they do. These Moon-Runs are seen as a blight upon the species, and those who cannot control such urges are known as the Moon-Chained.

Those freshly-infected New werebeasts, if known by their parent non-were species/non-were society around them, are often scorned and confined to their homes, before being driven away completely. Non-werebeasts call this a sickness or disease, ‘luecath’ or Moon-Sick illness, though it is no different than what may change a human into a werewolf, or an elf into a werecat. Those with known luecath before their change is complete can often never return to the community they had been living in before.

Abilities Both: Werebeasts have superior strength and speed over that of their parent species; they have relative magical abilities, and may pass on their were-genes through bite or clawing. If either attacks and bites a shifter or changing-creature with affinities tied to dragons, wolves, or felines, it has a chance to transform them into a weredragon, werewolf or werecat. However, these wereanimals are considered ‘impure’ or ‘tainted’ by their brethren, and are ostracised by their fellows and pushed away from the other three were societies as a whole.

Oddly enough, unlike werewolves and the Light-weres, werebeasts of both types have a unique weakness to silver - prolonged contact will burn a werebeast, and can inflict grievous injuries if used as a weapon. For example, an arrow with a silver tip may kill a werebeast much faster than an arrow with a steel tip, and will be exceptionally painful until death.

Original: To those without an inherent shifting ability or gene (such as shapeshifters, xeriin, Circadians, etc), a werebeast infection from the Originals will render an Original werebeast; their original forms are warped and twisted into the shape of the werebeast, and may never be able to return to their proper forms of their parent species. If bred, an Original werebeast will never gain a human/humanoid form, though they can shift between the more bestial form and a bipedal form, often at will. Originals may be Moon-Chained much like New werebeasts, and often get an irresistible urge to shift, until the desire can be controlled and blocked.

New: New werebeasts usually pass on their wereanimal affinity through bite or clawing, though have a small chance of changing their victims into an Original werebeast. As mentioned before, New werebeasts are very affected by a Realm’s moon or moons - these are called the Moon-Chained. Often, a Moon-Run will last anywhere from an hour to several, and can only be controlled with training and willpower.

While the Ten continued to elude him, Death turned his fury and malice upon their creations. When he became aware of the new werecreatures they had created, he withdrew into a massive cavern deep beneath the Realm’s surface. Feral creatures lived in the depths, and though they tried to flee, they failed to escape the dark god’s grasp.

For many days, Death molded them, and changed them to suit his will, not caring that many died, and all suffered excruciating pain. Eventually he was pleased with what he had created, and bestowed upon the strongest of his new creations a cunning intellect, and strength and endurance far beyond the werecreatures created by the Ten, and beyond the rest of its kind.

Once released by Death, the werebeasts spread across the Realm, increasing swiftly in number and engaging in instinctive attacks upon the werewolves, cats, and dragons. Death cared not that many of his creations died, instead taking great satisfaction in seeing so many werecreatures made by his hated enemies killed.

Although the werebeasts have long since lost their connection to Death, and mutated into a much different type of creature than before, the animosity between them and the rest of the weres remains as strong as ever.

This Ancient First was a half-humanoid, half-beast that looked like some mixture of a bear, a tiger, and a bull, walking much like a gorilla. He was a haughty, boisterous creature, and had the strange ability to shift his traits and incorporate a limited amount of other animalistic features in addition to frightening amounts of strength - able to punch boulders and maybe even mountains into dust. He also had control over earth.