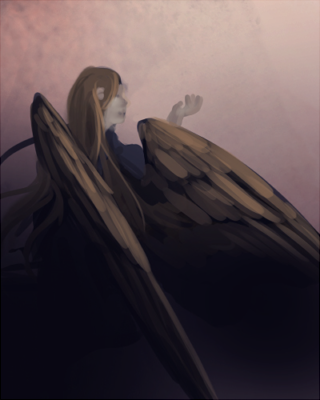 Siren are beautiful humanoid creatures that come in two distinct variants; land and sea. Land siren are gifted with wings, slender builds, and limited birdlike features; sea siren may have eel attributes, often resembling merfolk or sea-Kin xeriin. Both types may alter their appearances slightly in the eyes of whoever or whatever they're luring to appear more attractive, and may physically shift into a fully human form. Siren lure in others with spells formed of magical song, and must prey on emotional pleasure to survive.

Songspell - Detection Musically attuned individuals, such as bards and entertainers, may recognize a siren's song for what it is, and may be able to block or evade it. However, once they are caught by the spell, they cannot resist it - and may die faster than those who do not know they're caught.

Land vs Sea Land siren and sea siren do not get along often; as a result, they usually refer to each other by derogatory, insulting names. Land siren are often called featherbrains or harpies; sea siren are called fishbait and soggy-songs.

Similarly, those siren that are viewed as lesser than others have similar slurs: land siren that cannot fly are called mud-walkers and blunt wings, while sea siren who cannot swim are referred to as beached and gill-less.

Sirens feed upon pleasurable feelings to survive. They foster these feelings in their prey via their alluring songs. Sometimes they will fill fall back on coaxing their victims into letting their guard down by offering them bountiful feasts and joining them in dining, though they draw only scant nourishment form such meals. If all else fails, they can draw sustenance from less potent feelings of pleasure, though they can only go for so long like this without risking starvation.

Appearance The siren comes in two distinct types; one avian-like, and one merfolk-like. Both may abandon their other features and shift to appear fully human at will as an inherent magical ability, though this is more difficult for younger siren. The two variants are described below.

Land: Land siren are more avian like and often have slender builds, long tapered wings, and may sometimes be born with more birdlike features. Examples of these can be a feathered tail, scaled feet, long talons, and various assorted feathers. These siren often cannot achieve long, sustained flight with their wings, as they are not large enough and are often too narrow; those that do are called the Windblessed. Those who cannot fly at all are seen as lesser, and are rarely seen among their land siren fellows.

Sea: Sea siren often have fish or eel-like attributes; webbed feet and fins are most common, as are merfolk-like tails. Winglike, long fins sprouting from their shoulders are another common trait, often spined and large enough to glide across the water for short durations. All sea siren have gills along their necks in their true forms, and may breathe under water indefinitely. They are also most likely to stay in their human forms than land siren when luring prey, as their unusual appearance may break their songspell's hold.

Culture Land: Other races consider land siren more dangerous than their sea counterparts because of their ability to walk amid the cities and towns of inland countries without being detected; for good reason. They integrate into society well, though disappearances - due to the siren's songspell and their feeding - are common wherever they dwell.

Land siren are solitary creatures, and often come together with other siren only to reproduce; few truly pairbond, and most only stay together to raise children until they are able to feed on their own. Some may pairbond with other species, though this is rarer, and looked down upon by siren of both types.

Sea: Sea siren live in small groups, and are much more social than their land counterparts; they build small civilizations on scattered islands or beneath the ocean, and may help one another in luring prey to feed upon. However, as a whole they are less common than land siren due to lack of easily available food.

Both land and sea siren view their own race as superior to that of their cousins; both often refer to the other by derogatory means, and conflict is common when they meet. Pairings between land and sea are regarded as hostile insults to the species as a whole, and the parents - as well as any rendered children - are actively hunted until death.

Abilities Both types of siren must feed off of emotional pleasure to survive; this is most often done by coaxing a victim into joining them in song, and feeding off of their lifeforce through it. The victim is mentally controlled by the siren song, and will often keep singing until their energy is spent and they die. Most are not aware they are being controlled, and feel no fear as they sing; the songspell traps them in a euphoria that does not end until their death. As a singing victim gets closer to death, their songs release more pleasure, though less potent - many young siren kill their victims too quickly and do not get as much energy off of the feeding, where older individuals are able to draw more through longer song.

Where younger siren move through victims quickly, older siren are able to end their song and keep a victim alive, so that they may partake in their energy at a later time - the songspell of an older siren has a longer lasting effect than that of a younger one. Older siren also have more control over the attractiveness of their forms' appearances to various species - if a siren's true form is too radically different from what the victim finds pleasurable, the songspell's hold will not work.

Other forms of pleasure, both mental and physical, may sustain a siren for a time, but cannot keep them alive for long. Usually, starving siren will resort to these methods if emotional pleasure is not readily available - most often in times of great crisis and depression, where not even songspells may drive one to sing.

A siren's song is unique to every individual, and is held as a siren's identity; these songs vary in strength by age and skill. If one siren copies another siren's song, of any type, that siren may be attacked by the offended siren; some have constructed magic to take away a siren's voice. If done permanently, that siren will eventually die.

As Death roamed the First Realm, the wind carried the sweet, beautiful notes of a sweet song to his ears. The voice was sweeter and more beautiful than any he had ever heard, and he paused where he was as if enchanted. But the dark god’s heart was too filled with malice, and his will too focused on bending all to his will, to be moved by it.

Instead, a malicious idea had taken root within his mind, and he he followed the sounds of the beautiful voice until he found a lovely young maiden, seated by a stream and singing, unaware of the sinister intentions the dark god had for her. Before she was aware of his presence, he bewitched her mind, and she sat, enthralled, as he wrought a change within her.

An eldritch aura surrounded her, and her voice now carried in it an enthralling tone that could snare the mind of all but those with the strongest wills, though any who weren’t caught in her spell would be able to see her for what she was. He filled her with a greedy desire to ensnare others to serve her whims, and feed her pleasure; but he left her devoid of any compassion, so she would seek out new individuals to enthrall after her current thralls died in fits of chaotic song. Slender, shimmering wings sprouted from her back with which she could glide, and she gained the power of glamour to change her appearance to one more pleasing to her victims.

Releasing her to her own devices, he sought out others to bestow similar changes upon, though he made them different than the first; some he gave wings much akin to the First's, but others he covered in scales and fins and set them to the sea. Just as the First could ensnare others with her songspell, others could do likewise, though they similarly lacked any true compassion and would just as readily discard or kill those who no longer served any purpose.

Like many of Death’s creations, the siren can be found in many places, mainly living where they can easily find potential victims. Land siren, as those with wings came to be called, can be found most anywhere - while sea siren most often snagged sailors coming ashore to look for companionship after weeks or months spent upon the ocean.

This Ancient First was a siren who had the appearance of a maiden of unparalleled beauty. Gifted with iridescent wings and a flawless body, she was nevertheless cursed with a craving to trap and betray, tricking her prey into confusing lust for love that fed her no amount of emotional pleasure. Consumed by a primal desire to devour the emotions of others, driven to satisfy her needs, she was wild often to the point where she killed her thralls too early to save them for another feeding.