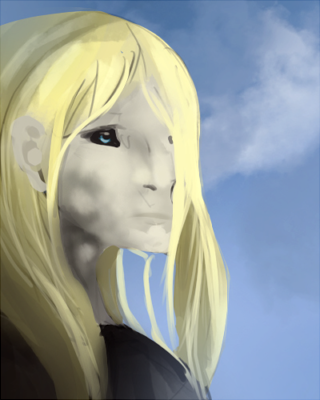 Selkie are creatures that live as unique pinnipeds in the ocean and have the ability to shed their 'skin' to walk as a human on land. If their skin is stolen, they cannot return to the sea and will often wander for years looking for it before falling into a deep and deadly depression. Magic is rare, but found in limited degrees, and some selkie mages do exist.

Haul-Outs All selkie pods have small territories that rarely overlap; sections of beaches that are not often visited by other sentient species are claimed to be part of these territories, and are places where a pod may come ashore in safety. Often, these haul-outs will have small things that differentiate them from nonsentient pinniped haul-outs, including offering altars to sea gods, shelters for (approved) visitors, and special places for pod matriarchs and patriarchs to oversee the goings-on of their family members.

The Number Seven The number seven has a strong and significant meaning to selkies. It is said that, when Zacyn first created them, he shed seven tears into the ocean, and crafted from them the First Selkie. This is perhaps related to other occurrences of the number seven in their race: such as when an individual, landbound selkie or not, wishes to contact another selkie, he or she must shed seven tears into the ocean; or that when a selkie that regains their lost skin returns to the sea, they cannot return to land for seven years.

Appearance The selkie is a unique race of shinchanger who has both the form of a humanoid, and that of a pinniped, such as seals (which are most common), walruses, and sea lions. As pinnipeds, the species ranges vastly in appearance in each particular variant. Their humanoid forms may echo what they look like in their true form, though others may look entirely different.

Pinniped Form: All selkies have a pinniped form that they use for the majority of their lives; the skin that they can remove does not change appearance. Pelt color can be of any hue, though is usually dull in color, ranging more commonly around silvers, greys, blues, and greens; markings can be of any color (and are generally bright), and of any shape. Most interestingly, selkie eyes can be of any color imaginable, often as saturated as a coral reef, and heterochromia is very common.

Human Form: Human forms of selkies will always take after their pinniped form, and any that does not is considered an incredible rarity. Pelt and marking color is reflected in their human form's hair, and skin tone is lighter and darker according to what color range they might be. For example, a silvery seal with red stripes would have silver hair with streaks of red while in human form, and pale skin with a silvery hue and faint striping. Likewise, their build often echoes what type of pinniped they are - walrus types are large and muscular, sea lion types have long, pointed ears, seal types have larger eyes, etc. Most selkies in human form either wear their pinniped skin as clothing, or hide it where they think it will be safe.

Culture Most selkies will live in small, familial pods with others of their variants led by matriarchs or patriarchs; mixed pods have been found to occur rarely in areas where territories cross, though hybrids are few and far between. All pods will have local haul-outs on the beach and may invite other pods to celebrate various things, including mateship/pairbonding rituals, offerings to various oceanic gods. Territorialism is generally dropped between local pods who know one another, though traveling pods crossing through various regions are often challenged and rarely allowed to pass.

Each variant is different in basic pod demeanor: seal-types are peaceful and welcoming creatures, playful and jovial; walrus-types are fierce when riled and can be dangerous to non-selkies and those of other variants; sea lion-types are highly territorial and very protective of their own pods and their haul-outs. Small pods known as 'sea-bards' act as recognized messengers and news-carriers across several different Realms, and can be spotted at great distances due to colorful banners and ribbons they adorn themselves with to mark their status.

Selkies that have their skins stolen or burned often lose contact with their pods, and often fall into deep - and sometimes deadly - depression as a result. They love the sea beyond all things, and are lonely without others of their species, even if they take a pairbond with a landbound species. Some selkies may follow the skinless to land to help them cope, but will not if a skin has been burned, as then a selkie will become almost entirely human.

They cannot swim in their humanoid forms, and thus have a fear of falling in if landbound - however, this does not keep them from shallow waters, where they will spend long moments remembering what it is like to be one with the sea once more. Some selkies may mother or father children with other landbound species, and may leave these hybrids on land to return to the ocean - however, if a child is born with the skin of a pinniped, they may abandon the other parent and return to the sea together.

Abilities Selkie magic is relatively rare; most often, they are incapable of elemental magic save for water, though reiatsu and non-elemental magics are somewhat more common. All selkies have the ability to transform from pinniped form to human and back via their removable skin, which can be stolen and hidden from them, or burned. In this case, selkies will lose the ability to shift completely, and their markings and colors will fade to more natural hues. They are excellent swimmers in their pinniped forms, but are incapable of swimming in human form, rendering them unable to return to visit their pods when their skins have been taken away.

The legend of how the selkie came to be is known to date back to Felnova's very beginning; when Zacyn looked upon the sea and watched the seals play and dance in the pure sunlight, sleeping under the shimmering moonlight. He grew fond of the creatures, but felt sorrow for them, for they would never know lives beyond the sea and the limited beaches they wandered upon. An idea came to him, in his grief - and one night, he descended down to the ocean to put his plan into play.

Zacyn cried seven tears into the sea; those tears he wove together amid the saltwater, blessing them with light and life to create the first selkie. The First Selkie was a young female named Anastazya, who happily swam the seas by night, and during the day walked the land of men and women, interacting with all the other species of the Realms. Like magic, she could also change into each form by choice at any point, an early shapeshifter between seal and human.

One day while Anastazya was participating in a festival with the friends she had made on land, a young woman came to her and confessed her love to the selkie; but in the most respectful way Ana declined, telling the woman that their love could never be. The reason why was because she had a mate, a seal that lived in the sea, and she belonged to his pod. Unbeknownst to her, however, the woman was a witch who cursed the selkie. THe curse had no name, but it forced the young selkie to become a skinchanger - a creature that needed her pinniped skin to return to her seal form.

Confusion struck the selkie when she transformed the next morning, holding her seal's skin in her hand; she found that the woman had been a witch, and fled to find her in fear. The witch told her that she would never become a seal again without her skin and that if she lost her skin, she would forever pine away for the sea and waste away until her death.

When she turned to leave, Ana discovered that the world spun around her, and the ground rushed to meet her as she slipped unconscious. The witch had drugged her, and was there waiting for her when she awoke. Upon waking, the witch told her that she had hidden away her seal skin and that she would never have it again. Ana begged her for it, attempting to use any bit of heart the Witch may have had; she even told the witch that she was pregnant with her seal mate's child, but the witch didn't care. She refused and did not give her her seal skin back, forcing Anastazya to leave her home.

It's said that Anastazya then gave birth on land to a young selkie child, who had the skin of another pinniped; and without her skin, she died in grief, as Zacyn shed more tears to become other selkies to populate the lonely seas.

This Ancient First was a selkie that looked like a silvery seal in her pinniped form, and a woman silver of hair in her humanoid shape. She was fun-loving and carefree, and had the ability to shift at will before her kind was cursed.

Much like the selkie, the friggan is a skinchanger; however, where selkies are bound to the sea creatures that they hold kinship with, friggans are bound to various types of bird and a unique connection to the sky. It is said that Naerex granted a falcon Anima to a selkie in her time of need, but the Anima changed into something far different - creating the first friggan. All friggan are descended from Naerex-blessed selkies like the very first.

Friggans are humanoid in build and may have any skin color, eye color, and hair color - though patterning on the skin is common, and feathers may be found in one's hair. All friggans have a 'skin' of any type of bird in any color and type, and may either wear it as a cloak, or a cloak with functional wings (with the headdress on top of their head appearing with functional eyes), or they may use the skin to transform into a bird completely. When in their demi-form, they can fly as well as they can in their bird form, and often use this over any other.

Friggans may have their skins stolen, much like selkies, and will be unable to return to their bird-form until the skin is recovered.