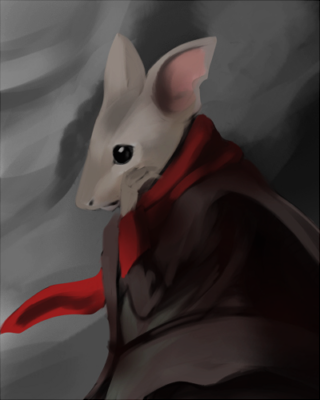 The reguli are a species of humanoid creatures of short stature which bear stark features similar to that of different rodentia-esque fauna. Each variant has its own skills and tendencies, and they make for wonderful companions and friends, as they are used to relying on each other to survive.

Average Height:: 4'0" - may vary between variants

Caste System It should be noted that reguli are a flexible culture - while their variants have specialties, it is not unheard of for them to venture outside the norm of their kind. This may earn some disdain from others who limit themselves to their defined specialty, but this is not grounds for exile or some sort of heresy, simply an odd choice that often raises eyebrows.

Lucky Charms Honored worship of Zeldrima is held by every reguli, regardless of clan, and often is the point of many a token gift: lucky charms, tokens, and trinkets have symbols and runes sacred to the goddess of luck carved in them, and are carried with great importance by the holders of such. In reguli pairbondings, the giving of luck rings symbolizes the desire for long and lucky lives together, and many reguli and buried clasping these rings in their paws when they die.

Odd Colors Most of any reguli clan will affect the colors of their animal shapes; however, rare and off colors are always possible, though the views on these vary from clan to clan and individual to individual. However, many reguli will often dye patterns into their fur or braid longer hair for fashion (in the case of those variants with enough fur to do so).

Reguli are omnivores, but most tend towards a more vegetarian diet, particularly heavy in fruits, vegetable, and nuts that can be easily scavenged. The tophidans are an exception to this, due to a life spent mostly underground. It is rare they ever sample anything aside form the roots, insects, and mushrooms they most often dine upon.

Appearance Reguli differ wildly in appearance depending on the clan they come from, but always appear to be vaguely humanoid and of short stature with animalistic features covering much of their bodies. Most, though similar to xeriin, look more like smaller, bipedal versions of their rodent affinity than their xeriin cousins often do.

Muridans: Muridans share similarities with mice and rats, and are slender and lithe, often more muscular than their Tamham cousins. Their tales are prehensile, which aids in their agility, and they often have rounded, sensitive ears - both in terms of sensitivity to sound and sensitivity to touch. Their fur coats range wildly between white, brown, black, and gray.

Those that engage in dark magic or are exposed to toxins and pollution tend to thin the hairs on their tails and become significantly more rat-like. Lastly, as per their namesake, they have sharp front teeth - which may give some a speech impediment. There are also possum-like muridans that spawn from the rats which are significantly larger, have sharper features, and more canine-like teeth.

Sciuridans: Sciuridans seem to take a nod from squirrels and raccoons, having a bushy tail and more tapered ears. Raccoon-affinity sciuridans are much larger, and have more canid features, where squirrel affinities are much smaller with tails nearly the size of their bodies. Unlike most reguli, sciuridans do not hide, and are prone to showing off their fanciful tails like a fashion accessory; in fact, most of their fashion is based around the tail. They often come in red, gray, and brown fur coats.

Tailless and different-tailed sciuridans do exist - with affinities based around the marmot, prairie dog, and beaver - but are very rare, and usually not part of their kinsfolk's society at all.

Tamhams: Tamhams are a portly race sharing much with hamsters, guinea pigs, and chipmunks. Their cheeks are poofy, and their bodies rotund, with slightly stubbier limbs than their fellow reguli. Not only are their fur coats varied, they often sport odd spots - some of them dye these spots on into special shapes for added cuteness or fashion.

Tophidans: Tophidans are a mole-like people - unlike most of the other reguli, they lack external ears and a tail, and their eyes are incredibly small. Their bodies are completely covered in fur. Generally somewhere between the tamhams and the others in build, one of the key features of tophidans are their rather massive, flat claws, which are built for digging through the earth at high speeds. Because of this, some tophicans are unable to manipulate small objects, as their paws cannot close around various things with ease.

Culture Reguli tend to enforce castes through social stigma and norming, though there are the occasional deviants; these deviants may still stay depending on the specific settlement's rules. These settlements are generally not overly expansive, as reguli have a tendency to migrate quite a bit all over the various worlds - even the merchants of the tamhams seem to expand their entrepreneurial ventures all over the world. Reguli are also horrid gossips and tend to be extremely chattery, prone to talking the ears off their companions. It should be also noted that while reguli can be fighters, their general instinctual tendency is to flee first, fight if necessary.

Muridans: Most of the muridan clans are somewhat wary of predatory creatures, but have great curiosity and are prone to getting themselves (and many of their friends and family) into trouble on adventures. A muridan reguli will almost always be the first to jump at a chance for involvement in a new quest, much to the groans and frustration of their fellows.

Sciuridans: Most playful of the reguli, sciuridans are at the same time very welcoming and very wary of outsiders. It is difficult to gain a sciuridan's trust, but once won, they are steadfast and may never stop talking about whatever and whoever has captured their attention at any given time.

Tamhams: The tamham clan is perhaps the most welcoming and seemingly joyous clan among the reguli; they are the most open to outsiders, and are less skittish alone than other clans. Craftsmen, traders, and merchants, the tamhams are found far and wide across multiple Realms.

Tophidans: Tophidans have the least interaction with the outside world, due to long hours spent underground. They often trade most with the dwarves and groundrakes, and some become bonded Riders of cavewyrms and similar creatures. Many are quick to help those trapped in cave-ins or lost beneath the earth, however; as a race, they are very kind. They fear the leviathan and sandworm most, and will actively avoid desert areas because of this.

Muridans: Muridans are some of the most agile reguli - which also matches their small stature. Matching their wanderlust and sense of adventure, they tend to have a natural knack for sensing danger and avoiding it, even in the midst of battle. Muridans which work with dark magic turn significantly more ratlike, and this taint is often passed to any offspring they beget.

Possum muridans tend to forego the traditional muridan agility because of their size, and instead use their larger stature to strike - however, since they're still between a muridan and a normal humanoid size, their agility is thus between a normal humanoid and a mouse or rat muridan. Possum muridans also possess great illusory powers - mostly used to escape or to bait enemies into attacking.

Sciuridans: Sciuridans tend to be performers and con-artists - gifted with a silver tongue and great beauty. Those based on raccoons also are survivalists, able to improvise with many things they scavenge. It is said that the tails of these creatures are bewitching in of themselves, and carry magical properties - some even report hypnosis via the movements and patterns on these tails. Like muridans, they are agile and acrobatic - although sciuridans tend to use these tricks for show, to impress, or simply to escape.

Tamhams: Tamhams lack in combat abilities and magic, but are excel at various crafts, including enchanting and smithing, as well as selling these services to others. They also tend to be social butterflies with silver tongues, said to be able to charm a dragon out of their hoard if they are so inclined.

Tophidans: Tophidans use their sizeable claws to combat enemies - these claws conduct reiatsu well, and thus serve like weapons in of themselves, able to be bestowed with enchantments and even have runes ingrained. Breaking these claws is harmless to the tophidans as far as pain goes, but it can be a form of unforgivable insult to some of this clan.

Another ability tophidans have is the ability to sense movement through the ground - they would be able to tell the precise moment a bee lands on the petals of a flower assuming absolute focus. As such, they are often the warriors of reguli - fierce hand-to-hand specialists aided by their variant's natural tools. Furthermore, tophidans are able to treat most soft-ish ground materials like water, "swimming" through the ground and bursting through the surface for surprise attacks. For this reason, tophidans are sought after for their unique abilities by mercenary and bandit groups.

Long ago, there was a tribe of forest-Kin xeriin called the Koatoa; a vast tribe who specialized in a variety of aspects, refined to their affinities' greatest strengths. As forest-Kin xeriin were diverse in the affinities they are born with, this specific tribe only allowed rodent-esque xeriin to join them; others were given to neighboring tribes when they were old enough to leave their mothers, and the tribe's purity remained.

These rodent xeriin consisted of many daredevil explorers who sought adventure and glory through a variety of means. Their rodent affinities helped them survive such ordeals, and often brought great prosperity (as well as some amount of danger, now and then) to the tribe. Their chieftan was often a xeriin who achieved great feats of skill and had many adventures, regardless of type or gender.

The tribe, facing ridicule from those clans and tribes around them, decided that they would take to traveling the Realms as a whole; to indulge in their adventurous nature where no other xeriin could hassle them or threaten to drive them away. Through many lands they passed, nomadic and curious, awed by the sights and sounds that they saw. New songs they sang, influenced by their adventures, and the tribe came to discover many treasures and trinkets in their long-coming wanderlust.

As it eventually came to pass, curiosity killed the rat. They underestimated the terror of the Darklands, and found themselves stranded; portals away would not come even to those with shreds of magic, and many fell ill in the tainted aura of that horrinble country. Corruption began to change their bodies, and twist their minds. The weaker ones slowly began to die, caught in-between their humanoid and animal forms, overcome with fever and sickness they could not fight.

It just so happened that the goddess of fortune, Zeldrima of the Millirand Five, came upon these pitiful xeriin. Seeing potential in their adventurous spirits, she gave them the diversity and form necessary to survive - enhancing their natural spirit and ability to work as a team, forming the reguli we know today. "You came as wanderers to a new land, and that land forsook you," she said, looking upon the new people with a sad smile. "But now I have given you what you need to survive. Go, and wander; fulfil your desire for adventure, and look upon the worlds in awe. Be wary, but do not allow your wariness to stifle the candles of your hearts."

Due to this blessing, the reguli still favor Zeldrima to this day, adorning themselves in lucky charms that glorify her and her esteemed radiance.