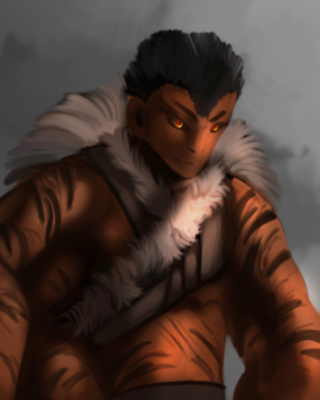 Honorable - if bloody - warriors, the quaterneri are multi-armed species of vaguely animalistic humanoids that live in extremely hot temperatures and bow to none but those who have bested them in battle. They are renowned fighters and respected smiths, though their extreme habitats have kept them isolated for a large number of years.

Burial When a quaterneri dies, the family is in charge of their ritualistic burial. If lava is nearby, they will pour some over the resting visage of the dead, creating an imprint as the rock cools. They then carve out an alcove and place the imprint upright within it, sometimes shaping the outer layer to make the fit more snug. If lava is unavailable, then clay or some other natural molding substance are used.

Frostbite While quaterneri are well-developed for warmer climates, anything too far below "too warm" could result in the onset of frostbite. It doesn't have to reach freezing temperatures for them to experience the effects, and their flesh blackens twice as quickly as a traditional human's. When too cold, they will slow, turn black, and eventually die if they are not able to stay hot; they can survive well above boiling temperatures, but anything within ten degrees of freezing is deadly. Thus, when traveling, quaterneri may carry with them superheated rocks or metals for short trips, or wreathe themselves in things that have fire enchantments for as long as they can to stay warm.

Appearance Large and generally humanoid, quaterneri are noted mainly for their extraneous sets of arms. These appendages can number from four to eight, though four is the most common. They are quite capable with their extra sets of arms, and even their feet are known to be quite useful; their toes, long and flexible, can act as an extra pair of hands using a rudimentary thumb-like toe.

Quaterneri are found with skin tones in the warm color range: rich reds, browns, and russets appear in various saturation and shade combinations, along with more unusual tones such as orange and yellow. Another feature of their skin is a pattern of stripes ranging from faint and sparse to bold and abundant: most may be compared to tiger or zebra-like patterns, but there have been instances of more geometric designs and even the occasional odd marking among them. This comparison might be assisted by their eyes, which appear animalistic and primarily feline, with slitted pupils and irises that reflect light in the dark. When cut, their blood glows like liquid fire, and scars often give off a slight glow in darker environments.

Culture The majority of quaterneri typically live in large groups called Clans in extremely hot areas like volcanoes, geysers, volcanic vents, or underground near magma rivers and lava floes. Often, Clans will take swims or jaunts in these seemingly deadly temperatures. Traveling away from these areas is considered dangerous, since a sudden drop in temperature could throw any quaterneri adventurer into a deadly situation. Because of this, territory is highly sought after. New safe zones are disputed, and old ones are fiercely defended. This leads to a prominently violent exterior.

Males and females compete in regular tournaments to determine who shall champion any territory disputes, and the weakest are set to training exercises led by the champion to make the whole group stronger. Every other year, though, these territory fights will pause for courting with the nearby Clans, though the parents typically compete beforehand to determine which Clan is in charge of the decisions about where children and families will live. The champion is not always the one in charge, though. Typically, the strongest male of the head family will be in charge of movements and challenges, usually called the "Prince."

These ideals of a might-based hierarchy extend to their relations with outsiders. The results of a preliminary fight determine who chooses when said outsider leaves the Clan; sometimes, this results in semi-captive situations where outsiders are absorbed into the group structure and allowed to compete in the aforementioned competitions. Those who win their first fight are allowed free passage through the territory, and if the win is decisive, the representative may even request that the outsider stay to train them or come back and become a patron.

Older quaterneri often sport many scars, and thus age and variety of scars is seen as a thing of respect and a mark of survival. As scars tend to glow in the dark, those too old to fight anymore may preside over meetings in the dark, speaking their wisdom as all look on.

Most of this species have an innate ability to find lava flows and either a high tolerance or total immunity to fire and hot temperatures, helping them survive in their strange habitats. This does not mean quaterneri can use magic; instead, they turn the strength of their arms into fighting skill. They are able to wield weapons of enormous size, multiple smaller weapons, or even rare dual bows in a fight, and hand-to-hand and hand-to-foot combat is a dangerous engagement for any challenger.

There is one specialty that seems to be made just for them, though;made out of obsidian, defenders often wear blades strapped to their wrists that extend over their fists, like claws at a fist fight. Although they generally believe that a good defense is a strong offense, not all are warriors. Those who do not fight turn to weapons crafting, and some are even known to be master smiths, able to strike the iron while it's hot, and handle molten metal without worrying about protection.

Long ago, there was a fire elemental whose power was great enough that being in his form of pure fire threatened those around him. A powerful warrior, his form was that of a four-armed giant - constantly aflame. Whatever he grasped was set ablaze, and no army dare challenge him for fear of losing many men.

For the most part, he stayed within the volcanoes of Deibreth, as his heat could do no harm there. However, life confined to the area around a volcano is quite limiting - and thus, he contained his fire within his being, making his outer shell something between volcanic igneous rock and flesh for a temporary time, and visited civilization in a nearby town.

At first, they feared him - for his odd, charcoal like flesh made him appear to be a fearsome monster. While they did not attack him, they would avoid him out of fear of incurring his wrath. Suffice to say, their relationship was strained at best.

However, it was also at this time that this island was then raided by pirates.

Fearing that his true form would scare the villagers even further, but also wanting to protect them, he maintained his form of igneous rock as he attempted to fend off the raiders - both to earn their trust and to prevent collateral damage. However, the exertion of keeping himself restrained took its toll over time. Day in and day out over the course of five days, he stood watch, fighting off the raiders as they came - his four fists were said to have been like catapulted boulders, smashing into raiders left and right - before they gave up the ghost. By the end of it, he fell into a deep slumber for several more days. And when he woke, he felt...tired. Lethargic. Cold.

When he awoke, he found that his usual flame had been locked away within him - a volcanic heat that could never be unsealed. Instead, he was a beast of something between igneous rock and flesh. He was no longer blessed by fire. He yelled to the sky, cursing all for his fate - and the villagers realized what they had done. Through their fear, they had harmed the man who had come seeking companionship, and had even fought and sacrificed much for it. It did not take spears to inflict great harm upon a man.

But all was not lost. A young woman from the village - the elder's daughter - approached him with gifts she had gathered from the village as an offering to this great man - the First Quaterneri, Quadan, from which their name comes. Over time, the two formed a pairbond, and had many children, who then mingled with the villagers and had children of their own. He taught the villagers to fight, as to fend off any future attackers. Each of his descendants inherited his four arms, igneous skin, and the ability to not only pass their genes on through their offspring - but to give the 'gift of fire' to others, and transform them into elementally-gifted humans much like Quadan was himself. Each of these gained an extra set of arms, and the same fireproof, rocky hide he himself bore.

When he finally passed due to a fierce battle with an ocean leviathan defending his home, Quadan had given up the blessing of fire to bless a small island with his power. Every villager had been given the gift of fire; and the new quaterneri thrived. Over time, they lost the skin of stone - although their hides remained extremely tough, especially given their constant battle-readiness. As the generations passed, they could no longer give the gift of fire upon other individuals. Their features began to streamline, strengthen, and adapt to their home; their eyes became animalistic and predatory, and their skin developed patterns and markings previously unseen.

And when the next would-be raiders came, they found an expansive clan of large, athletic four-armed warrior men and women who seemed to delight in the sport of combat - the descendants of Quadan and those blessed with his gift. It is told through amusing legend than this particular pirate of some infamy trembled at the sight of an eight foot tall quaterneri man with striped markings with rippling muscles - the moment he flashed that 'demonic' grin and cracked his knuckles, the pirate lost control of his bladder.

In the thousands of years since, that first Clan has spread across the Realms and formed many smaller Clans, found in volcanic regions in multiple worlds.

Quadan stood at some twelve feet tall - a sizeable giant of a man - in his prime, he was made entirely out of fire, with four massive arms of flame. He lived within the core of the Deibreth Island's volcano until he decided to reach out to the locals. Worshiped as something of a lesser known divine figure and a guardian, Deibreth Island is littered with statues of him of varying quality. A rock constantly burning with fire is held in high regard as his 'heart' - it is unknown if this is his actual heart, but the symbolism this rock holds is well-regarded by the locals.