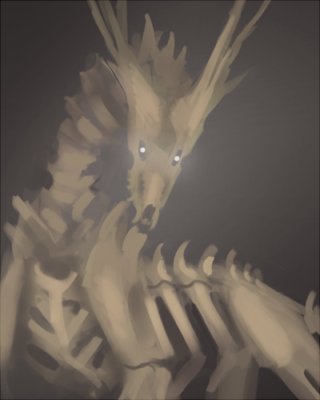 Giant creatures created via necromantic magic and brought to life in terrifying, skeletal draconic forms. They have limited lifespans, but are terrifying creatures to behold that feed off of the suffering and terror that they instill. Originating from Hell, these creatures have been found in the Living Realms for thousands of years, as necromancers have adopted their method of creation.

Nnar' are horrid beasts made of bone and given life through magic; they have no need to eat anything solid. Instead, they draw energy from suffering, fear, and pain which they inflict on anybody unfortunate enough to cross their path. While it is rare, every so often, a nnar' will be driven to violently slaughter anybody they can while in a total frenzy.

Appearance An individual nnar' is entirely skeletal in appearance; they are low-slung, often appearing as large groundrakes made entirely of bone. They often have large horns and teeth with many bony spikes; some pieces of them may be uneven, especially in older nnar', as they replace broken bones with others scavenged and enchanted to adhere to their bodies.

Nnar', when they're first Raised, are relatively small; as they grow, they replace pieces of themselves with larger bones fused with their magic, though not all they find may be uniform. Adult nnar' may appear to have an overall regular appearance, while older may have unusually-sized limbs, awkward-looking tails, half-and-half skulls, amid other such mismatched bones. Their eye color - pinpricks of light that is the same shade of their reiatsu - never differs, but grows brighter over time. Very old nnar' have reiatsu that shine through cracks in their bones, and over time, the cracks grow until they cover every bone in a spiderweb of color. Eventually, the energy will begin to bleed through these cracks, until the nnar's skeletal body is overloaded and the bones shatter with the force, leading to their death.

Culture As summoned creatures, nnar’ possess little intelligence. Sentient ones are rare, to the point where some doubt their existence. Whatever personalities their souls once had are all but lost when a soul is implanted within the body of a nnar'; when Raised, they are implanted with a desire for violence, and a joy in inflicting pain and fear. This aspect seems to increase in older nnar', to the point where they become ruthlessly vicious, even murderous, without a strong hand reining them in. It is not unheard of for a nnar’ to lay claim to a select group of victims that it then preys upon at its leisure, torturing and killing them off one by one. Nnar’ who go for too long without prey to hunt often go into a berserk frenzy as they seek out something to slaughter.

Without someone controlling them, they mostly stay amongst themselves, though will bicker among themselves almost without cease. As a result, these creatures are more liable to get into a fight with another nnar’ out of instinct than any specific cause. Relationships among nnar' are rare, and rarely result in anything resembling lasting friendship or romantic interests; many feel disdain for such trivial things, as it is not in their nature. They have a tendency to wander around the Realms, but can mostly be found in swamplands, forest, and underground caverns.

Abilities Nnar’ are efficient predators, using tooth, claw, and horn to mutilate and gore whomever or whatever gets in their way. When ordered or provoked, they enter a frenzy and attempt to crush anything and everything in their path. Moreover, their fangs possess a special venom which can paralyze their target and slowly corrode their veins like an acid - this venom is magical in nature, and will suck life away with minimal external damage, evaporating the blood and devouring the target from the inside-out, leaving behind a desiccated husk.

Furthermore, nnar’ are capable of utilizing reiatsu to induce fear in their targets. However, this is the limit of their magical capabilities, as usage of excessive magic would disrupt the reiatsu which holds them together. Older nnar' may 'bleed' this toxic reiatsu from the cracks in their bones, and often appear to leave afterimages of energy in their wake.

Lastly, nnar’ can rearrange and change their body structure to some extent, replacing bones with new ones or attaching bones in odd, surprisingly creative ways. However, their odd arrangement of bones forces them to move about in awkward and eerily unnatural ways. Most can contort themselves into unnatural positions to fit into places they would not otherwise, and may even leave parts and pieces of themselves behind if too heavily damaged or stuck.

Violation of the One’s creations was one of Death’s favorite things, to turn his counterpart's beloved dragons into his own vengeful toys. Nothing brought the god better pleasure than rending the sniveling mockery of their image in twain. Scowling down upon one such creature, he loosed a hellish flame upon it, scorching it away until only bones were left. Death envisioned a way to defile their bodies further; and he slew several others in much the same way. He would not yet let them rest in peace where they lay, and a malevolent grin spread across the god’s twisted visage as he set to work.

Enfusing death into the charred dragon bones he brought the beast up, molding it in his version of perfection. He took from it those glorious wings the dragons so loved, breaking them into small bits until he was satisfied with their destruction. With the remnant bones, he took them to craft the pieces from head to tail in the form of large spikes, ending with a clubbed mace at the end of its tail. Taking the essence of the fleeing souls, he forged it into a single, volatile spirit and infused it within the bones, watching delightfully as life was birthed in the unnatural creature.

You are First of the Nnar', Death intoned, clicking his claws as the ungainly creature looked around. I give to you paralytic venom to halt your foe in their tracks paired with a bite that can easily eat away at the bloodstream like an acid evaporating and devouring it entirely. A magical ability to suck away their life without harm to their body.) Go forth and inspire terror, my creation; to you I leave the destruction of all that is good to! Be joined by many, and lead them all to Hell!

Other dragons he slew, as many as he could find - then he moved to lesser creatures, forging them into the nnar' as well. It wasn't long before his methods were adopted by necromancers in his name, and even after the destruction of the First Realm and the creation of others, nnar' can still be found. Though many are in Hell, terrorizing the dead, necromancers of all types have created them in other Realms… and they still inspire terror, wherever they may roam.

Nothing is yet known of this Ancient First's appearance or abilities.