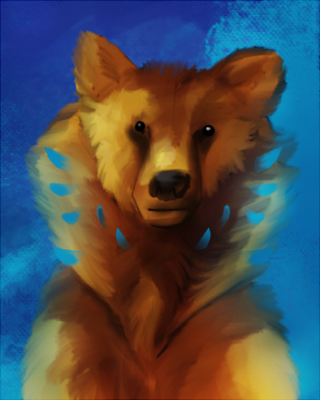 The nanook is a large, sapient bear native to Sud'rlund in Millirand; once known as the 'guardians of the north', these bears have since spread from their icy origins across the various Realms. They have retained the futuresight granted to them by the gods, and remain respected magic users by multiple other species.

Average Height:: 6 feet at the shoulder

Location Found:: Abroad, but originally from icy portions of Millirand.

Hibernation When a nanook chooses to hibernate, often after having a vision of a difficult winter, they will often gather food and supplies long before such an occurrence happens. For three weeks before they hibernate, they will devour everything that they've gathered, and may sleep up to a solid month before waking again.

After waking, however, they may be irritable and hungry: thus, it is not reccomended to approach a nanook fresh out of hibernation.

Nanook are largely omnivorous, with the exception of the ailuro. They will typically forage for whatever edibles they can find, though the poe and ursa will occasionally hunt or fish. Only in the absence of all else will poe or ursa eat carrion, while the ailuro will seek out grain if their preferred diet can't be satisfied

The bisari diet is largely influenced by whatever animal attributes they've picked up through their genes, though they are by and large still omnivorous. Eskbears tend towards a more carnivorous diet as a result of their harsher, rather barren habitat.

Appearance Nanook are large bears with an assortment of colors and features depending on individual and environment. All variants may be found with horns, spikes, wings, multiple eyes, and a variety of other mutations; however, their base anatomy is always ursine in nature, and does not deviate in any great degree. Older nanook of any variant are prone to growing crystals in their fur at advanced ages, or having crystalline protrusions for their last hundred or so years.

Ursa: The ursa, or ursa nanook, is the most common type of nanook; they are bears of the forest, with medium-length fur and basic attributes. Spikes and horns are a frequent addition to the ursa nanook, and many sport them in all colors and forms.

Poe: The poe, or poe nanook, is closely related to the eskbear in that they can commonly be found in arctic regions and are thought of to be the original progenitors of all nanook, great and small. They are larger than other variants, and sport heavy, thick coats in pale colors. Feathers and accent fur are common among poe individuals, as are large paws with gripping claws to better navigate the ice.

Ailuro: The ailuro, or ailuro nanook, is a jungle-dwelling bear with rounded features, smallest of the variants. They have short muzzles and relatively short fur, along with very thick skin. Commonly, ailuro nanook will be found with plants growing from their bodies, as seeds may take root in their hide and grow amid their fur.

Culture Most nanook are solitary, though may come together to mate and raise young; most do not pairbond, though there have been exceptions. As a whole, nanook are not unkind; they are helpful to travelers and may come to the aid of those passing through their territory, especially if one is in danger. However, among nanook variants, this behavior may differ greatly. All nanook may choose to hibernate during colder times, though they do not need to unless a winter is surprisingly heavy.

Ursa: Ursa nanook establish the smallest territories, and commonly mingle with one another for holidays and other such occasions. Many mothers will raise their cubs in groups before dispersing when their young are grown. Ursa nanook are generally not adventurous, but are quite curious, and may get into trouble more often than others.

Poe: More aggressive and territorial than both other variants, poe nanook are the least likely to go out of their way for another; they rarely find such distractions viable uses of their time, and are known to be opportunists to the utmost degree. Any trespassing in a poe's territory is risking much, as these bears are apt to attack first and ask questions later.

Ailuro: Docile and easygoing, ailuro nanook are herbivorous bears who detest violence and will ward away intruders to their territories by displays of aggression that they rarely follow through on. Bards, scholars, and knowledge-seekers of any kind are sacred among ailuro bears - these may pass freely through most territories unmolested. However, these nanook also consider sleep sacred, and interrupting a bear's nap except in dire circumstance may get a paw to the face before any explanations are heard.

Abilities Nanook are gifted with an assortment of magic, along with whatever physical abilities they possess. Most are very strong, though somewhat slow, and have great wells of stamina and energy. Elemental magic is common, and greatly affected by where a cub is born; cubs birthed in ice and snow may develop affinities for such, while a nanook born in the ashy remnants of a wildfire will trend more towards fire elements.

However, all nanook are Seers to some degree. Gifted by what they refer to as the 'futuresight', visions may come to them at any time, in a variety of ways, and cannot be disabled or blocked. The Sight is so common to them that they may comment on it nonchalantly as they See a vision, while going about their day. If multiple nanook focus their attentions into the Sight, they may force a greater vision of a future more possible than others - but this is very dangerous to all bears involved, and is not commonly attempted.

Many centuries ago, a lone bear and her three cubs had wandered into a temple made to Fenrir high in the north of Millirand's coldest land. Priests who attempted to startle her away were chased off by her anger; few began to realize her condition, and fewer still wished to aid her in her time of need. The she-bear was starving, nothing but skin and matted fur stretched across her bones, eyes sunken and hollow and filled with only the desire to continue existing for the wobbling young that followed at her heels.

Few attempted to aid the bear; giving her food and water, but she bypassed them and swiped at them with large paws if they came too near. Finally, when she reached the statue of Fenrir, she paused and allowed her cubs to pass her. Immediately, they set upon the food offerings and devoured them, and drank water and milk that priests slipped in while the mother's attention was elsewhere. Sated, the cubs curled up beside their mother and slept, while she lay down herself.

One priestess, a mother herself, watched the mother bear and clasped her hands in prayer. She prayed to Fenrir that he may allow the she-bear to live to see her sons and daughters prosper; to accept their aid and be nourished, to be whole and complete once more. The priestess had lost her children earlier in the year, and had prayed to the god then, as she had done many times in her life. However, this time, a sudden flurry of emotion struck her - and a comforting warmth filled her mind and heart and soul. And thus, she knew what she had to do.

Guided by the unseen claws of the god, she approached the bear and her cubs, hands outstretched in a welcoming gesture. The she-bear looked up and bared her teeth, but made no move to attack. Slowly, carefully, the priestess knelt to gather the sleeping baby bears in her arms, as light began to suffuse her skin. The image of Fenrir emblazoned in whites and golds upon her robes shimmered and seemed to move, as the great love the human woman felt seemed to burst from her, bright light that swirled around all of them as the priestess disintegrated into a flare of pale reiatsu.

The fire burned freely for a handful of moments, swirling about them like a light-infused wind. Then, it surged forwards, towards the mother bear and around her - and as it disappeared within her, she gasped, eyes filled with sudden knowing. Her thick fur grew smooth and shimmered in colors of the sunset; her eyes turned the same bright white-gold as the light had been. Rising, she looked at her cubs, as each took on different appearances themselves - and as each awoke, she smiled at them, for they looked healthy and bright as any cub had ever been.

In her eyes lay intelligence, and she smiled broadly at the awed priests surrounding her. She found words in her mouth, and dipped her head graciously, overwhelmed by a sense of incredible gratitude. "Thank you so very much," she said, as her cubs crowded around her in joy. "Thank you, thank you, all of you, thank you..." But then came the voice of the gentle god; it echoed in her mind, and the minds of all of those around her. "Be known evermore as the Nanook, Guardian of these Northern Lands; be joined by others like in your kind and heart, and protect all with your grace."

As she left the temple, other bears she met; bears of the snow and ice, akin in mind to her, establishing territories all along Sudr'lund's northern half. It is said that the First had many offspring beyond the first three cubs - that her line lives on even today, the legacy of motherly love.

This Ancient First was a giant bear in colors of the sunset, covered in long, silken fur. She had bright eyes that glowed golden, and had teeth and claws that appeared to be made of solid precious metals. Nothing is known of her abilities.

Bisari are nanook descended from those once caught in a godstorm in Xaeri's northernmost lands; they were gifted with features not previously found in any of their kin, animal affinities that took on a variety of forms per individual. Most bisari have a bear's general build, but with different animal attributes; such examples have been the heads and wings of owls, the hindquarters of a snake, the legs of a horse, or the teeth and tail of a crocodile. Bisari do not often take after their parents' affinities, and cubs do not form these until after their third month of life.

Descended from the original ice nanook of Sudr'lund, the eskbears have taken a different evolutionary path - they are much larger than their brethren, and have pale coat patterns only, often with ice and snow clinging to their pelts no matter the clime. Most are cold to the touch, and their bones are rumored to be solid ice. All eskbears have powers over cold elements, and are weak to fire and heat. Eskbears do not share the nanook's futuresight, and Seers are very rare.