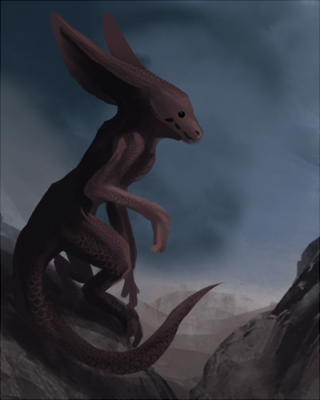 A grubby, irritating species of small humanoids with fine scales, ugly snouts and large, batlike ears. Mostly unintelligent, they are looked down upon by most other species, seen as pests and rodents. Nevertheless, in large numbers, goblins are a force to be reckoned with - especially if led by a capable leader.

Location Found:: abroad; most dwell in caves and caverns, deep underground, or in city sewers and dungeons.

Baknakin Origin The baknakin goblins originate from a tribe on an island with minimal resources - like food - as well as several dangerous predators in Millirand. Having few other options, the tribe made a truce to work together.

Over time, these goblins learned the ways of spellcasting as well as how to make crude instruments; among these goblins, those that could invent tools to make things easier for their comrades were selected as good mates. Eventually, they were able to spread beyond the islands. They named themselves after the goblin that was able to figure out how to build a crude boat: baknakin.

Goblins and the baknakin variant both prefer to hunt live prey, usually rats or similarly sized creatures. Baknakin are better at hunting birds, and other flying creatures, than typical goblins. In the absence of live prey, both goblins and baknakin will make do with whatever edibles they may find.

Kobolds tend to be scavengers, surviving off of whatever they can find. However, should anything larger than a single kobold can catch wander into their territory, they will often go on the hunt immediately.

Appearance Goblins are renowned for being both small and ugly. For bipedal creatures, their arms are disturbingly disproportionate relative to their height, hanging down nearly to their knees. Their skin is covered with dull scales, ranging in color from flat black to muddy brown to swampy green. Their faces are best compared to a lizard's, with a blunt, sharp-toothed snout and small, beady dark eyes. Their bat-like flappy ears and stout, gator-like tail make them look like a comically grotesque proverbial chimera of species.

The females of this race are slightly taller than their male counterparts, and may have a few strands of stringy, scraggly hair protruding from their humongous ears.

Baknakin: There exists a variant of goblin called the baknakin; these goblins are very visually similar, though somewhat more proportionally balanced, smaller ears, and may have some amount of greasy hair. A few of these goblins have been found to be tailless, unlike their brothers and sisters. Most baknakin, however, can be noted by wearing some semblance of proper clothing and armor, unlike the rags traditional goblins employ.

Culture Goblins are scrawny, yet savage, war-like creatures with intelligence that just barely passes for sentient. As such, they are prone to in-fighting just as much as they are attacking a hostile intruder. Their temperament is best described as primitive, aggressive, and highly territorial, often petty enough to wage all out war over something as silly as who gets the last scrap of grub.

Baknakin: Baknakin are intelligent goblins that are quite innovative - able to learn crafts at an alarmingly fast rate. In addition, due to their intelligence, they are able to have a little more foresight in knowing not to try casting 'fireball' while hiding in a bush, unlike their dumber cousins. While they lack the same level of physical strength and savagery as their cousins as well as the pack-like mentality, their ability to think quickly and think well more than makes up for their shortcomings in these departments.

However, one big flaw among baknakin is that they're still selfish and opportunistic - unless threatened with danger, they will sooner stab you in the back than truly cooperate on an endeavor. Furthermore, their curiosity tends to get the better of them. Sometimes, they tell you not to mix certain chemicals together for good reason.

Abilities Goblins usually fight with crudely hewn spears or arrows; sometimes, the generals actually have swords. Few goblins can work with magic; those that are 'fortunate enough' end up overestimating their ability with results equal parts tragic and comical. Their minds are incapable of complex strategy, and they often end up relying on overwhelming strength in numbers.

Baknakin: Goblins that fall under the baknakin category may find more success in elemental magic, reiatsu control, and basic alchemy. Though their abilities are not great, some do make fine spellcasters, far beyond what their normal cousins may conjure.

When Death found itself ripped from the dying First Being known as the One, his essence gave form to many sinister, menacing creatures. And then there were the goblins; small creatures, weak and numerous, with the first one created as something of a humorous attempt to mock the One’s power - as if to say ‘I do not even need my full power to create something to defeat you.’

The First Goblin was formed of a frog's rotting carcass, combined with the essence of the earth; infused with Death's reiatsu, a small and shambling creature was born, and Death chuckled at his divine joke. He wasted no time in creating many more, very quickly - and to these new goblins, he said simply, Go and make chaos, in my divine name.

The goblins were created with that one purpose in mind - to attack quickly and without provocation. They were the scouts and cannon fodder during the war over the First Realm, utilizing primitive swarm tactics. Of limited intelligence and lifespan, they were never intended to form civilizations. They would often die off too fast due to their bravado and stupidity - both friend and foe alike stepping all over them when the real fighting broke out. They barely managed to eke out what could be vaguely called an existence. In fact, the first goblin is said to be the very first of the Ancient Firsts to die - while it was biting on its dirt and snot encrusted thumbnail, it wondered it could get the same stimulation in its eye.

However, some managed to survive long enough to form primitive, crude civilizations. Without the guidance of Death, the goblins have attempted to find their place in the world, alongside all who might oppose them. They have succeeded to an extent, forming small nomadic bands in a variety of Realms. Due to their short lifespans and raiding lifestyles, some have formed sparks of remarkable (although not exactly outstanding) intellect.

This Ancient First was a goblin that looked like a taller, more slender one of his race; his skin was a dark green and eyes were blazing red, and he was known for the two curling horns that curved behind his large, batlike ears. He was dim-witted, and had no magical abilities to speak of.

The kobold is a race of primordial goblins; around the same size as their more numerous cousins, they appear to be much thinner, sometimes emaciated, and have longer arms and spindly legs. They have large, batlike ears and eyes that dominate their face, often red, gold or green in color. Oddly, the kobold may give off a faint luminescence in the dark, and when angered, this glow can flare like fire. On their heads, down their necks and backs, over their shoulders and thighs lay scraggly, matted fur that transitions to dry and wrinkled skin. Many have long thin tails covered in fine scales, the same that is found on their hands and feet. Most wear no clothing save for perhaps a loin cloth, and bits of bone they may have saved from small prey.

Kobolds are savage when cornered, and live in deep caves where they help goblins mine and make weapons, often as slaves. Because they breed rapidly, they are sometimes utilized as hit-and-away attack forces, though the coordination of a strike is sometimes lost on the kobolds themselves. Despite their lacking intelligence and scrawny bodies, they are very strong, nimble, and accurate. Some may be taught to fire a bow and arrow, others to use poisoned knives and daggers.