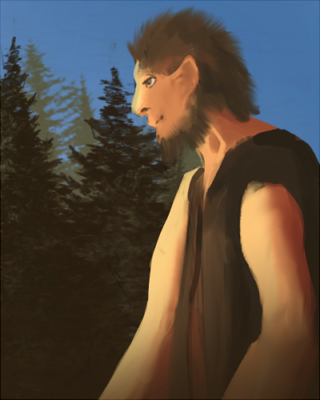 A massive race of blunt-featured humanoids with colossal strength and durability. While their physical might is immense, purebred giants possess no natural magic of any kind - both elementally and not. They are relatively dim-witted, and may be triggered to aggression at the slightest provocation.

Lifespan Unfortunately, many giants don't reach their maximum age due to injury from species infighting, or from accumulated injuries fighting other races.

Giants are omnivores, too dimwitted to be anything more than hunter-gatherers. They will hunt and eat anything they can catch, and will devour any edible plantlike they may find. Aside from cave giants, most will refrain from actually eating sapient races - such as humanoids - they encounter unless provoked, or starving

Jotuns are more sophisticated than their dimwitted cousins. They prefer to hunt big game, and cultivate small gardens. They supplement this with whatever fruits, nuts, and roots they can gather.

Appearance Giants are large, powerful humanoids who largely resemble thick-featured humans, only of enormous size and girth. They may have any skin tone, and any color hair, with their eyes ranging from natural browns and blues to the most unique of reds and purples. Giants commonly have shaggy hair and beards while their female counterparts - giantesses - tend to grow out their hair longer than necessary. Both giantesses and giants may be found donning crude garments created entirely of hide; sandals or boots, which are also comprised of hide as well as wood; and simple, massive clubs crudely crafted from tree limbs, or a small tree that they have ripped out by its roots.

Many giants tend to dwell in remote places, far away from civilizations that they may find conflict with. As such, giants of different extreme climes may appear differently, and some common, unique variants are described below.

Mountain: The mountain giants are those that dwell in high, often snowy terrain; they are larger than their fellows, and often wear thick furs and heavy pelts. Their skin is thicker than average, and they grow more hair than the traditional giant or any of their brother variants. Most are pale of skin.

Cave: Smallest of their race, cave giants tend to have gnarled features and multiple mutations such as horns, spikes, scales, and tusks. Most cave giants wear very little, depending on the type of cave they dwell in - though they are the only known giant type to routinely decorate themselves with gemstones and metal in any degree. Cave giants may have unusual skin tones alongside the normal, such as dull gray, green, blue, and purple.

Cliff: Tall but relatively slender compared to their common, cave, and mountain kin, cliff giants dwell near the beaches and inlets of the Realms, dining on fish and marine animals. They may have any skin tone and hair color, though they tend to decorate themselves with crude tattoos, furs, and bones.

Culture Due to their relatively violent personalities, giants are generally considered solitary beings. Nonetheless, some are occasionally found in small family groups, and few may work together towards a common goal. However, because giants are prone to taking what they want by force, most groups of giants eventually begin to fight amongst themselves until either the primary aggressor has been driven off or killed, or the others submit. On a similar note, altercations between solitary giants occur on a regular basis, in part for the reason that that too many of them end up eliciting conflict over perceived territorial lines, food, and a dozen other things.

Giants normally live by hunting and gathering, using their immense size to overtake their prey and their massive strength to kill it. Some giants may prefer to use their clubs to fight as compared to brute force, but that is uncommon. Common giants are nomads who follow the movements of large herds - and raiders who prey upon anybody unfortunate enough to stray into their path.

Those variations of giant and their cultural intricacies are explained below.

Mountain: While mountain giants remain a hunter-gatherer race, many will not shy from the need to work together to bring down large prey in the coldest months of the year. Mountain giants will often come together into hunting parties to take down a sud'r mammoth, for example, or to drive out a particularly vicious threat to their existence (usually dining on it afterwards, no matter what it may be).

Cave: Strictly solitary, and viciously territorial, cave giants only come together to breed - and very little else. Often, romantic connections are established through feats of strength between a male and female, which soon part after the deed is done. Otherwise, they will drive any intruder - giant or not - away from their home, no matter what they may be or who they might be with. Cave giants are the least intelligent of all, and cannot be reasoned with.

Cliff: Perhaps the most intelligent of all giant types, cliff giants are often more tolerant of any race and may be willing to learn from their neighbors. Some cliff giants agree to ongoing trade with fisherman and traveling merchants, though cities and towns make them uneasy.

Abilities While not excessively skilled combatants or particularly gifted with intelligence, a giant’s sheer size and strength more than compensates for their lack of brain power and finesse, marking them as preternatural hunters. A giant can also hurl large stones with great force, crushing its enemies in droves. A single swipe of a giant’s club has the power to annihilate an entire squad of soldiers; even the finest armor stands little chance of shielding its owner from a giant’s fury, and retribution is all but impossible. Along with that, their long legs allow them to overtake all but the fastest of creatures in a few steps, which conversely allows for them to sprint away from advancing adversaries.

Despite their physical strength, however, giants are relatively weak to magic of any kind. Mental magics are devastating to a giant, and they are very easily swayed and controlled. While they have no complete elemental weakness, magic of that nature may prove worthwhile, as they are not immune to any of its effects.

Long had Fenrir watched as the humans of Millirand struggled to settle into their new home. Lacking as they were in strength, or stamina, when compared to some of the other races, they were forced to put much more effort into their labors to survive. This was especially true in the more rugged, remote regions of the Realm.

Compassion stirred within him, and he decided to bless a tribe of humans living in an especially rugged land. The village leader was singled out to be the first to change, and was blessed with immense stature and enormous physical strength. This massive physical power allowed the first giant to complete what were once strenuous tasks with relative ease.

Encouraged by his initial success, he gifted the rest of the tribe in a similar manner, granting them all enormous stature and strength. However, he discovered that their natural minds were unable to cope with their change in size, finding, to his chagrin, that they suffered from mental shortcomings. He resolved to set things right, but before he could, an urgent matter forced him to abandon his work.

Fenrir promised to return one day, and grant them the sharp minds they’d lost during his well-meaning alterations to their bodies, but during his absence, many of the giants wandered away, taking to nomadic lifestyles, and mainly traveling alone. Other races learned to either stay out of the giants' ways, or managed to work out mutually beneficial arrangements.

Eventually, Fenrir did return as he promised he would, and forged many of the giants into the mighty jotuns... but that is a story for another day.

In the distant past, the Millirand Five looked upon the brutish, bumbling giants with compassion and gave to them keen minds, as well as the ability to make use of magic. Calling themselves jotuns to distinguish themselves from their less intelligent cousins, these giants soon developed a full civilization, west of the city of Zion and across the icy sea. Shorter and not as broad as regular giants, jotuns honed their craft and created large, well-made clothing and footwear for themselves.

Aloof and rather isolationist, the jotuns defend their territory with great courage and tenacity, marching to battle with massive, finely-crafted weapons, and thick, stout shields produced with large wooden planks rimmed in metal. Swords, axes, and spears are common weapons for them; a single jotun with a bow may pose a grave threat to many dragons. When on the warpath, they typically don thick, stout, knee-length boots, and oft-horned helmets, eschewing any other armor.

While it's not common, it's not unheard of for jotuns to possess elemental magic. Usually restricted to a single element, their powers make for significant spell-weaving. Fewer still are those who possess non-elemental magics - these few individuals possess a great variety of magic and can craft highly potent spells on par with the mightiest casters of other races.