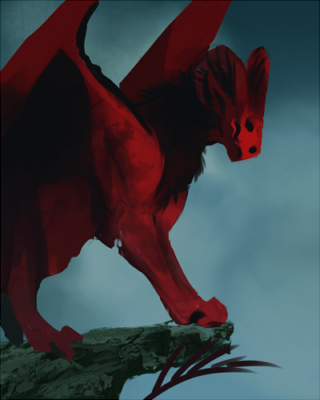 Long ago, in Millirand, four dragons were attacked by basilisks and turned to stone. An elven mage crafted a spell to free them using kv'naer. He succeeded, but the spell was fundamentally flawed, and the dragons were warped and twisted into the first gargoyles, cursed to return to stone when struck by the light of the sun, and stripped of their immortality.

Gargoyles are mainly carnivorous, though all except the more bestial Miir are omnivorous to some extent. Their builds heavily influence what kind of diets they have, and prey they tend to go after.

Appearance Vaeros:: These gargoyles are bipedal, tall, and typically heavily muscled. Their facial features can span from mostly humanoid to very draconic, their wings are typically bat-like, and their tails long and thick, occasionally sporting spikes or club-like growths. Hair or manes are common, and they often have scales or thick leathery hide. Descended from the line of Vaerosidris, a great Red western with a black mane and tail, golden accents, claws, and wing webbing.

Gula:: Rivaling the Vaeros in height, these gargoyles are typically not as robust in appearance, although they are nonetheless sinewy and athletic. Their bodies are typically avian or mammalian in appearance, with corresponding furred-and-feathered features, with a rare few more closely resembling dragons. Descended from Guladranaxes, a Gold with silken fur, great white feathered wings, feathered crests, who had slight darker tan/brown barring and markings, and horns of creamy white.

Alae:: Shortest of the bipedal gargoyles, they are nonetheless taller than the average human, standing over six feet tall. Commonly lacking wings entirely, these gargoyles are lithe and agile of build, and often sport horns. When an Alae does sport the wing-like ridges, they may have webbing that stretches from the forearms to the legs, much like a flying lizard or squirrel. Often scaled, but some have fur. Descended from Alaelandria, a Blue sea serpent hybrid, who had wing ridges that stretched from shoulder to tail, purple and green markings, and many spikes and horns.

Miir:: Quadrupedal gargoyles with heavy, powerful jaws. Generally the size of a large dog, or a smaller wolf, thick-bodied and muscular. Some sport large, ram-like horns, but most lack these. A pure Miir with wings is unheard of. Descended from Miirgrondr, a Grey groundrake without wings, ram horns, black markings, and a heavily, muscular build.

Culture Nocturnal by necessity, gargoyles spend the daylight hours holed up in hidden lairs. They are highly territorial, and will often attack unwanted visitors, usually ambushing them when the night is darkest. However, if approached with respect, they can make stalwart allies, and extend their protection to those who would offer theirs in return.

They live in small clans, often numbering a few dozen individuals, under the leadership of a clan chief, who can be either male or female. A chief's mate will hold considerable influence, but their offspring will be not, as young gargoyles are often raised communally. In battle, all able-bodied adults will take an active role, while elders and adolescents safeguard their homes and the young.

Abilities As a whole, gargoyles are strong, fast, and highly resilient. Their teeth and claws are sharp, and they can see through even magical darkness without any problems. The stone gaze of a basilisk, or earth mage's attempt to turn them to stone, would amount to nothing, as their bodies are immune to petrification, except under the rays of the sun. While in their stone forms, they are vulnerable to having their bodies smashed, as they will be unable to defend themselves and will crumble to dust.

Vaeros:: Often the strongest gargoyles, except perhaps for some of the Miir, they tend to favor a powerful, straightforward combat style, using sheer strength and brute force to overpower their foes. Those who choose to use weapons beyond their natural ones tend to favor axes and maces. Those who show aptitude for magic usually have an affinity for fire magics.

Gula:: These gargoyles tend to favor ranged weapons and spears, when they use weapons, using their superior reach together with their strength and balance to overwhelm their opponents with grace and precision. Some will combine spear and shield, and use both with equal skill. Those with magical talents tend to favor air. They tend to be the most gifted flyers among the gargoyles.

Alae:: Although they are weaker than their fellows, these gargoyles are still stronger than most other races. However, they prefer to use their speed and agility in battle, and when they use weapons, swords and daggers are their preferred weapons. Magic, if present in an individual, is often connected to water. They also tend to be powerful, graceful swimmers, though those with the ability to glide are clumsy in the air.

Miir:: Often incapable of speech due to their jaw shape, most Miir are capable of mind-speech. Lacking hands, they rely entirely on brute strength and powerful jaws and claws in battle. They will often go for the legs of their foes, breaking bones or severing sinews before dragging their victims off into the dark to finish them off. Those who can manipulate magic tend to favor earth.

Long ago, in the early days of Millirand, four great dragons, Vaerosidris the Red, Guladranaxes the Gold, Alaelandria the Blue, and Miirgrondr the Grey, got into an argument with a group of basilisks. What caused the argument is long since lost to time, as is who struck the first blow. What is kown is the four dragons were turned to solid stone as they succumbed to the petrifying stare of the basilisks.

For many years did their stone bodies stand in the wilderness, locked forever in the middle of a struggle long since ended. And every day over many of those years, and elven mage would visit their stone bodies, seeking to discover some way to return their bodies to their natural state. Eventually, he gathered the courage to attempt a powerful working of magic, powered by the light of the moons, and by kv’naer runes.

Runic circles were traced, and words of power echoed in the night air as the elven mage worked his craft. Enormous power swirled around the stone forms, and slowly, the stone began to soften. The mage exulted, for it seemed his long years of study and preparation were going to pay off. But, somewhere within his runes, there was a major flaw. The spell tapped into the magic of the dragons themselves, and their very immortality. The stone forms abruptly shattered, leaving behind four new forms, part draconic, part humanoid.

Upon realizing what he’d done, the exhausted mage fled, leaving the new gargoyles as they came to be called to ponder their new lives. Though they despaired to have lost their original forms, and immortality, they were truly horrified to find they could no longer to take pleasure in the light of the sun. Born of moonlight, their new bodies turned back to stone when touched by sunlight.

Still, the will to live was strong within them, and they took to the shadows of night, fiercely safeguarding their lair against intrusion, and slowly growing in number over the years. Four distinct subtypes, each reminiscent of and named for one of the four progenitors of their race, appeared, each with its own unique strengths, and many clans were made up of gargoyles from each of the four families.

It is unknown what became of the elven mage, but some legends told that, one morning, he was found dead in his home, his body rent and torn by powerful claws, but nothing is known for certain. All that is known is he was responsible for the creation of gargoyles, and his creations can be found in many places, though most still remain on Millirand.