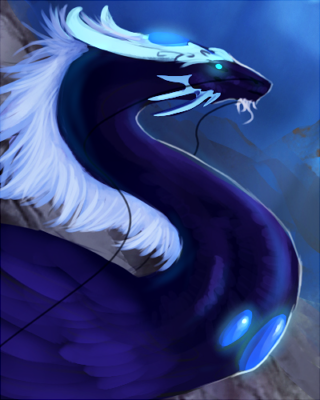 A species of long-bodied, eastern-like dragons aligned with time. Circadians are split into three groups, each attuned to either day, night, or dusk and dawn; the Aurorans, the Umbrans, and the Pure circadians respectively. They fly with magic, have small wings, and can be found in nomadic tribes across multiple different Realms.

Average Height:: 6 feet at the shoulder

Circadian Aging Since circadian dragons are immortal, they see little point in counting years as short-lived species do. Instead, they refer to a celestial event close to their time of birth as a general approximation of age. The "first" of these events is generally accorded to the oldest living member in a clan, resulting in a history of living memory as opposed to calendars or written accounts.

Circadian Illnesses Sun-struck or Moon-mad. Aurorans and Umbrans who deviate from their natural sleep cycles display amazing creativity and intuition far beyond their normal capabilities. However, at the same time they are prone to highly eccentric behavior. Pure circadians lack any coherent sleep cycle, and are, by extension, prone to be both sun-struck and moon-mad.

Tribe Travel Circadian settlements take the form of groupings of tents which can be packed up and transported quickly, allowing them to quickly move to new grounds. Migration always takes the form of two separate waves. Either the Aurorans or Umbrans will begin during the day or night, while the other group follows the following night or day.

Appearance Dragon; Both: Circadians are a short and slender breed, small in stature, with short legs and long bodies, and thick manes of fur or feathers that stretches from the top of the forehead all the way down the back. Their wings are always small, may be feathered or webbed, and can be found in numbers of one pair to two and three pairs all down the back. These wings can often have brighter (or darker in the case of some Umbrans) markings or colors, and can be used as displays for various reasons, often painted in different colors during courtship.

Circadian scales are highly metallic, and some shine them to a mirror-gloss that is capable of reflecting everything around them - thus, they are often targeted by hunters for their hides. All circadians have gemstones that grow in multiple places on their bodies, usually used to house the magic that keeps them afloat in the air. Most circadians will have a headdress of ornamental metal horns that acts much like a half-mask, surrounding a single large gem centered on their forehead. Some of them have long, whisker-like tendrils which are highly sensitive to the weather, and these can end in tiny, weightless gemstones, feathers, or fur. All circadian eyes are pupilless, and their range of markings, horn colors, and eye colors can vary intensely between individuals in each type.

Dragon; Auroran: Auroran circadians are somewhat more slender than their Umbran cousins, with brighter colors and longer, thicker manes. Their gems are often brightly colored and lighter in shade than their scales, and their forehead gem glows with the intensity of the sun or suns. Their headdresses are often in boldly-colored metals with smooth appearances, accenting the gem on their forehead with designs that vary greatly between individuals. Most of these half-masks or headdresses are fused with whatever horns they may have underneath - however, in the event of a hornless circadian, they may be held in place by decorative chains or straps. Auroran headdresses are also often decorated with hanging feathers, beads, pieces of metal, and other decorative things. The eyes of an Auroran are beautiful, brightly colored, and shine like gems.

Dragon; Umbran: Unlike the Aurorans, Umbran circadians are shorter in length and have thinner manes, and can be primarily found in dark colors that blend with the night. Their gems are often in cool tones that vary in shade compared to their scales, though some may glow brightly in the moonlight, and may be either lighter or darker than their base. Their headdresses are often in silvers and blacks, mythril and darksteel common, accenting the gem on their forehead with sharper, more angular designs than Aurorans. Most of these half-masks or headdresses are fused with whatever horns they may have underneath - however, in the event of a hornless circadian, they may be held in place by decorative chains or straps. Umbran headdresses often do not have much in the way of outside decoration, though they may be carved or engraved with subtle designs. The eyes of an Umbran are striking, larger than Auroran eyes, and shine like gems.

Dragon; Pure Circadian: Pure circadians are those that are Auroran/Umbran mixes, conceived and born in the twilight hours between true day and night. Similar to Aurorans and Umbrans, Pure circadians adorn themselves with enchanted headdresses that change color with the rising and setting of the sun. Their scales likewise shift in hue, from brighter in the daylight, to darker hues after sunset. Their eyes and gems both vary in coloration due to the rising and setting of the sun, much like their headdresses and scales; otherwise, they look just like other circadians.

Humanoid: In their humanoid forms, circadians are often slender in build, with skin that echoes their dragonforms; an Auroran may have very pale skin, while an Umbran may have darker skins in a variety of hues. Pure circadians may shift in color and appearance depending on what time of day it is, and may appear slightly more unkempt than their cousins. Their physical features - such as their eyes, any horns, gems and their headdresses - are retained while they shift, and cannot be banished. Their hair always stays the same color as their manes, and they may have highly reflective scales present anywhere on their bodies, though fully-scaled demi-forms are very, very rare.

Culture A peaceful and gentle race, circadians are largely nomadic, and live in tribes that wander less-populated areas of the various worlds. They are often so taken by wanderlust that a single circadian tribe may never stay in one place for more than a few days, and may lose more adventurous individuals to their own journeys away from the tribe. Each tribe is led by a Kagan and a priest or priestess who is often the mate of the ruling Kagan, and can be of any gender or variant. However, the Kagan and their mate are almost always either both Auroran, or both Umbran, as it is seen as bad luck to have a leading pair of differing types.

Aurorans and Umbrans live in the same tribes, trading off duties as the sun rises and sets, and intermingling during the twilight periods each day. As a result, circadian settlements never sleep. Nomadic as they are, their settlements are completely mobile, ready to be packed up and moved at a moment's notice at the Kagan's discretion. While Aurorans typically sleep the night away, some elect to remain awake. Those that do tend to exhibit great creativity, together with odd tendencies - Umbrans who stay awake during the day display similar tendencies.

Abilities Both: Circadians are well-versed in the intricacies of flight from a very young age; they are taught to store energy in their gems and draw upon its magic upon fledging, and most grow to be incredible fliers. However, magical storms - such as magestorms, energy storms and godstorms - as well as strong regular storms can interrupt their magic of flight, and make even the most skilled circadian plummet to the ground.

Auroran: Auroran circadians are great magic users that specialize in lighter elements, such as light magic, healing, fire, and nature; others may be skilled in enchantments and reiatsu use. They are faster than their Umbran counterparts, but cannot withstand many physical attacks, and do not have great physical strength. They are also weak to darker magics, and may become depressed if kept from the sun for long periods of time. All Auroran circadians have nictitating membranes which allow them to withstand the brightest light without difficulty.

Umbran: Though Umbrans are built better for more physical tactics than their Auroran brethren, many still have magical affinities; they specialize in darker elements such as darkness, water, earth, and ice. Some exhibit strong spiritual capabilities, and can phase much like ghosts, some even mastering invisibility. Most Umbran circadians are quite strong, though not as fast as Aurorans, and can see through any manner of lie, deception, and illusion. Their large eyes can pierce any darkness, magical or natural, with perfect clarity.

Pure Circadian: Primarily magic users with a much wider range of magical abilities than either Aurorans or Umbrans, roughly balanced between them in specialties. Their eyes are large, and possess a nictitating membrane, enabling them to function in bright light or deep shadow without any problems. Pure circadians don't share the same sleep cycle as Aurorans or Umbrans, and only sleep two to three hours in a day, broken up into several quick naps during the day and night. They tend to be highly creative minds, but are prone to eccentric behavior.

Some time after the first eastern dragons appeared on Kurai, a number of them fled that hostile Realm, and settled on Lizzarkyth, where the lyzards welcomed them, and provided for their every need. Surprised, but grateful, the easterns stayed with the lyzards for a while, until they left to find a more remote area where they could live in peace. They decided to shelter for a time at Aelia’s Stone.

However, the essence of the goddess still lingered, and the easterns began to change. They began to gain a close affinity for the passage of day and night, with some few displaying an affinity for both day and night. But it wasn’t until the first eggs hatched at the Stone that the dragons were truly changed. Those eggs that hatched under the sun revealed Aurorans, while those eggs that hatched under the moon became Umbrans. A few eggs hatched in the twilight time between night and day. These hatchlings became the first Pure Circadians.

These easterns took the name Circadian, and embraced their new nature. Over time, they split off into clans, and took to wandering the Realms, often descending upon more settled peoples to trade goods and banter, before departing just as quickly. While their origins remain a mystery to most, they gained acceptance with most other races, and gained a somewhat distant patron in Time.

Ascended from the Umbran, the Auroran, and the Pure, luminarians are touched by Lyfe himself; their bodies grow luminous with the colors of their original heritage and their manes blaze with incandescent reiatsu. It is said that when blessed, the Umbran, who shimmer in beautiful shades of blue and purple, take on the energy of the moon; the Aurorans brighten into the white-gold fury of the sun; and the Pure will take any shade of the rainbow, their purview descending from the stars themselves. Each luminarian glows brightly with luminescence, each scale blazing with light.

Luminarians bear, along with their blessing, an intensification of the circadian curse. Though their powers of creation become so strong that they are able to bring lesser constellations into life, their kind is prone to madness, with very few surviving the twists and turns of their own god-touched minds. None can sleep, driven as they are by their commitment to the heavens, and their scarcity - which is made all the more potent by their tendency to succumb to insanity - has made them very rare but vivacious creatures in the history of the Realms.

Due to their rarity, luminarians are a limited store species; please do not make one unless bought. Thank you!