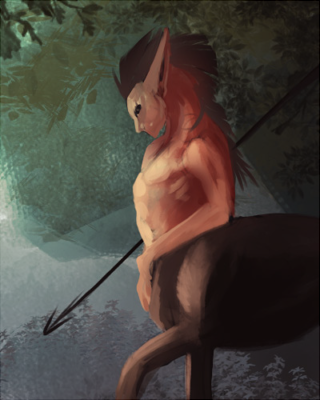 A centaur is an equine species with the upper torso of a humanoid. Living in location-varied herds, they often live in harmony with nature, though they are very capable warriors in times of great need. Seers are prolific in the centaur race, and all hold the stars - and their creator, Gaz'in - in high regard.

While centaurs are omnivorous, their diet is greater in vegetation than meat, since their lower stomach isn't as suited to digesting meat as their upper stomach. Nomadic as they are, grains, mushrooms, and other foods that can only be found in specific locations or by cultivation are only rarely eaten. They have a reputation as heavy eaters due to their size. Cooked and prepared meals are uncommon, but may be found in the diets of centaurs who live in large cities or with other sapient races.

Mar'caens have diets similar to other centaurs, influenced by their animal half, both in preferences, and in quantity consumed. Ra'tan deer are herbivorous, and prefer fruits, nuts, and some of more tender succulents. Shikatauru are omnivorous, though the War and Death variants lean more towards carnivorous.

Appearance Centaur appear as half-equine, half-humanoid creatures; they can be found in any assortment of builds and various horse breeds, may have any skin color and body type, and their coats can be naturally-occuring horse colors or more fantastical variations. Most possess long, deerlike ears and horselike manes in addition to hair that continue to little more than halfway down the back. Many females, called mares, braid their hair and decorate it with carved wooden beads whose style and color differ from herd to herd. Though centaur may possess any horse color, and the main body color is usually the same as their hair; off-colors are rare, but not unheard of.

Most centaur have appearanced that fit where their herdlands have been for many years; mountain centaur herds often have members with drafty builds and thick, long coats, where those that dwell in the plains are light and built for speed. Canyon herds have robust, muscular centaur, and those that dwell in the forest are commonly dainty and built like the elfhorse of Heartwood. There have been rumors of herds dwelling near the sea gaining scales and fins, as well as those in sky-continents bearing wings to fly with, but many regard these as unfounded.

Warrior-class centaur generally don specially-crafted, heavy leather or metal armor, and can carry a variety of weapons due to their strength. In times of peace clothing is usually minimal, but many wear decorative necklaces, earrings, mane ornaments, bracelets, and other adornments of various qualities.

Culture Loyal and proud, centaur will not hesitate to defend their herds and land from intruders, often protective to a fault of any they are close to. Most herds have differing cultures depending on where they live - grassland centaur are usually more open to visitors than those that dwell in the mountains or forests, though canyon herds are known to be some of the most secretive and rarest seen. Warriors will train often and hone their skills for the betterment of the herd, dedicated to its protection, while more peaceful members often pursue various occupations that do not require skill with blades. This includes the varied arts of the seer, the astronomer, the healer, and the priest. They worship Gaz'in, their creator and the god of Knowledge over all, and in every herd they hold the stars as regal and divine.

Most centaur herds are ruled by a pairbonded couple, with the stallion given the title of Syven and his mare the title of Syva. The Syven is the leader in all things related to war, hunting, training, and treating with other herds; the Syva usually supports her mate and in addition oversees the activities of the healers, priests, mages, and all assortments of study and schooling. When the previous Syven dies, the Syva will choose a new mate to be the new leader - or not choose a mate at all. In these cases, she will either prove her strength and leadership and rule the herd herself, or more commonly step down and allow another mated pair to take the titles. If the Syva dies, the Syven will simply never take another pairbond.

Abilities Centaur possess great speed and stamina, much like the equines they resemble; many are very capable in both physical and magical tasks, and are very quick to learn and adapt. Divination is common among centaur herds, and many Seers are born possessing varying levels of the Sight. Centaur foals are able to walk and run on the day after their birth, and gain any magical affinities within their first ten years.

Millirand’s early days saw its people focused mainly on settling their new Realm, with little regard to learning or pursuit of knowledge beyond that which was needed for survival. There were crops to plant, walls to raise, ores to be mined, wood to be chopped, food to gather, and stone to be quarried.

But there are always those who seek after knowledge. A group of humans, living on the outskirts of the burgeoning civilizations around them, had taken to following scholarly pursuits despite going through many hardships, for they still had to tend to their own survival. Gaz’in watched them in secret, often taking the form of a great owl and keeping an eye on their comings and goings, both impressed by their endeavors, and saddened by how their learnings came at a slow pace since they had to spend so much time tending to the necessities of their lives.

Eventually, he decided to intervene on their behalf, and bless them. He appeared before them in his full glory, and commanded the leader of their community to come stand before him. Slowly, the man rose, and approached Gaz’in, eyes wide as he gazed upon the god of knowledge, while the rest of the community remained kneeling before the deity they most revered.

A dark, starry aura of power swirled around the man, and his lower body dissolved and reformed into an equine shape. When the aura faded, the man’s head, arms, and torso were affixed to a horse’s body, where the horse’s head and neck would’ve been. His feet had turned to strong black hooves, and his lower body had become a strong, majestic, sleek blue roan, with a black tail streaked in grey. As he gazed down at his body, his hair lengthened into a long black mane, and his ears grew long and pointed.

Overwhelmed, he knelt awkwardly before Gaz’in once again, as behind him the rest of the community were abruptly covered by the same aura. Before long, a herd of centaurs were kneeling before Gaz’in. No longer will you need toil so long, or so hard, to survive in the wilderness. The summer days will not seem hot, nor the winter nights seem so cold, to you, my proud centaurs. You will have more time now to spend in pursuit of knowledge and wisdom. And to you, first of your kind, I bestow the gift of Sight, that even the future will reveal its mysteries to you, the starry god decreed.

Then Gaz’in took on the form of an owl, and flew off, circling several times around the watching herd, and disappeared from their sight. With their newfound strength and endurance, life was no longer so hard for them, and they found they didn’t need so strong a dwelling as they once had. Indeed, aside from winter nights, they often found themselves sleeping out under the stars, when they weren’t spending long hours studying the heavens. It wasn’ long before humans, elves, dwarves, and even dragons were coming to the centaurs, seeking their knowledge.

This Ancient First was a centaur that looked like man with a blue roan's equine body; his hair and tail were thick and black, and he often was found wearing parchment cases and a variety of bags and flasks to further his gathering of knowledge. He was an inquisitive and protective individual, and had the ability to see the future.

The mar'caen centaur is a subtype that has an animal half that is anything but equine; they can be an assortment of creatures from predatory to herbivorous, and can have any animal affinity. Generally, the size of a mar'caen will directly correspond to their animal counterpart - rabbit and snake 'taurs will invariably be much smaller than bear or elephant 'taurs, and tribes of these creatures do not often mix with one another except on rare circumstance.

Tribes will often consist of one Chieftan or Chieftess, pairbonded to the next strongest in line. Most of these pairings are not born of love, but necessity - the leaders are seen as god-blessed individuals, both chosen by the tribe's Seer once the old leaders are no longer fit to lead. Old leaders will step down and become sacred elders, and are often decorated in a variety of natural paints and jewelry made from bones, claws, feathers, and other such materials.

The ra'tan deer is a subspecies of centaur that have cervine bodies and humanoid faces. They vary greatly in appearance, and can be found in any color or breed; some have long, deerlike ears, and others can appear more elfin. Skin color often echoes fur color, and males are generally larger than females and have antlers that can be simple or intricate, in every color and decorated a variety of different ways. A common myth connects a male's antlers with alchemic properties, and they are often hunted by those seeking immortality or fame. Other cultures revere the ra'tan deer as sacred, and many species in Evylon hold them as friends and allies.

Ra'tan deer are known for their silence, and great mystery often surrounds them; they often only speak to those who they trust, and then softly, for their voices hold great power. They can sing and speak spells into being, and legends surround songs used in the past to raise and restore those killed on the battlefield. The older the ra'tan, the stronger its voice, and the greater its abilities will be.

The shikatauru are cervidae in build, with scaled humanoid bodies that vary somewhat in appearance according to the Kingdoms they are found in. War shikatauru are moose-like in build, with ram horns and a heavyset, muscular build. Members in Death possess an elk-like body type, with long, straight horns and heavy, plated scales, and are quick on the ground. Famine shikatauru are built closest to the traditional deer, with a small frame and a set of wings; they are the fastest of the four types. Pestilence shikatauru have the build of caribou, with venomous claws and fangs, and color-shifting scales for camouflage. Antlers are uncommon in all four types, though they can be found occasionally either over or under the Kingdom horns; single antlers, like that of kirin, are often seen.

The shikatauru are omnivorous in diet, though their intake levels vary by Kingdom. War is the most carnivorous of the four, and drinks blood rather than water, while Death often kills for pleasure rather than out of need.