By Tooth And Claw Dragons
Worlds of the Dead 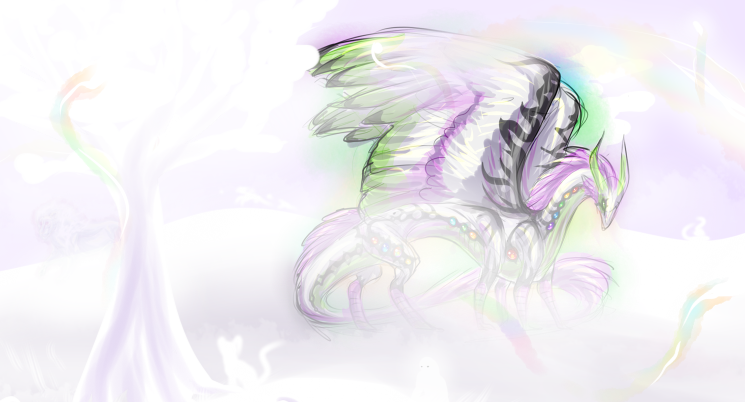 Realms of the Spirits

Apart from the Void, deep within its heart, lay the many segments of the Worlds of the Dead. Split into several Realms separated from the Living Worlds by a phenomenon called the 'Veil', the Soulplane is a collective of the souls of the departed.

These Realms are upheld by many names in various forms across legend and mythology - but as their existence is complete and concrete, very little information found in any scholar's tome is inaccurate. Those called 'spiritwalkers' are able to pass through the Veil freely, and are aft to bring their findings back to those who seek such knowledge.

Below is a record of these findings, divided on what Realm they focus on. Unmentioned, however, is that these are only a small segment of the many Soulplanes out there - within each Void is a heart of spirits, and many Spirit Realms exist apart from our own. Smaller, fragmented spirit-worlds also exist close by within the Void, each one unique on its own. These fragmented worlds, however, rarely last for more than a few thousand years; whatever trapped spirits lay within them when one dies are destroyed forever.

The largest of the known Spiritual Realms is the Soulplane itself; a world of absolute white, it is known as the Spirit Realm, the Realm of Souls, the Netherworld, and the Far Heaven. It can be described as a near-colorless world filled with white rocks and trees, low-hanging mist and luscious flora. The sky is a pale gold, lit with a bright white sun that never moves - though clouds may form and cover it, it never rains, and the plants sustain themselves in a frozen everlife.

Within its folds are the souls of those departed. Newly-arrived spirits are bright and filled with as much life as they had in the worlds away; they often can appear at the age they died at, though stronger souls may alter their appearance to an age of their liking (an elderly man, say, can appear to be 30 years younger). However, no spirit may appear older than the age of which they passed.

As time goes on, spirits begin to fade and many appear much duller in color. Over the course of an average of several thousand years, these souls begin to lose their physical form and disintegrate into small, firefly-like orbs with long colorful tails of light, much like miniature comets. They float about the Soulplane with no memory of who they once were; all that's left is essence and power, and as such, these Ancient spirits are very dangerous and difficult to command. If released into the mortal worlds, they have the capability of destroying life at a touch.

Many believe that the Soulplane is both beautiful and horrible for its lack of color - some say that it's this ever-whiteness of the world that drives spirits to fade in the first place. Whatever one's opinion, the Spirit Realm is a place for the dead, and governs the paths of spirits once they die. Its goddess is Linath, daughter of Shiranui, one who rivals the One in power.

Alongside the Spirit Realm is the Ghost Realm - a land that echoes the Living Realms and their many colors. Though the primary difference between the Ghost Realm and the Spirit Realm is color, the World of Ghosts is also split into many different areas that reflect the home worlds of those departed. As it acts like a transferring phase, there are no cities or villages, as souls come and go all the time.

Spirits that travel to the Ghost Realm have either recently died and are unable to accept their death, or have been wounded heavily as a ghost in the Living Worlds. Most often, ghosts stay here long enough to accept that they've passed on, and are escorted by the Lord of Ghosts to the Soulplane under Linath's watchful gaze. But sometimes, a ghost will request to be returned to the Living Realms, and are taken back to whatever place they died in.

Always present are the lowest class of ghost, ones unable to return too the Living Worlds and unable to accept their fate. They lurk in whatever segment is closest to their home, talking with the other ghosts as they come and go, until - eventually - they fade into nothingness and far away.

The Ether Realm and Highrealm

The Ether Realm and Gods' Realm are both unlike either of the two before. The Highrealm - home of the gods - is a place of vibrant color and life, bathed in the gods' vision of worldly color. Time passes so quickly one can track the sun's progress across the sky in a matter of moments, though it speeds and slows (and sometimes halts) upon the gods' command.

Traditionally, only the Greater Gods - the Millirand Five, the Felnovian Five, the Dark Five and Linath - have had access to this world, though recent reports state that lesser gods have been given access as well.

Just beneath the Highplane lay the Ether Realm, mentioned above. Laid out in a circular fashion, with bits of the Spirit Brothers at its center, the world of the Ether Spirits is constructed out of the memory of those that dwell within it. Each segment along the wheel is changed to suit the Realm of the Ether inhabiting it, and all are divided by running rivers and towering mountains. A great fortress rises in the center of the wheel, replicating Castle Oblivion in Hell.

Hell and the Farplane

Two halves of the same coin, Hell and the Farplane are are the Spirit Realms' last resort. Hell holds those many desolate souls too violent and evil to be released upon the Soulplane, locking them in its burning lands until their final judgement is complete. On the other hand, the Farplane is reserved for those souls that have been destroyed and are still remembered, a final resting place so long as that memory holds. Very rarely can a soul be reconstructed from the memory-fragments found here; but it is possible, and it has happened in the past.

Hell is a desolate place, barren, a desert - continually burning with silver flames edged in scarlet. Few trees grow here, each one white as bone, glowing with the light of a moon that never sets. Skeletal creatures flit about here and there, crawling over ruins that litter the grey stone of the barren landscape. Closest to Hell's magnetic poles, the reiatsu-fire from the Core grows much darker than the aura found at its center; from silver to black, red to maroon.

Beyond the fissures of the western desert lay an abyss that yawns wide beneath a floating fortress, sucking whatever comes near into the darkest pit of the Void. Above this pit of destruction is the great Castle Oblivion, built with obsidian stone and twisted metal, its towers lifted to claw at the sky. Within, it's icy cold, starkly contrasting the heat from without. Very few servants roam the halls, and Megiddo allows none that he doesn't trust within its walls. The Castle has never been breached.