By Tooth And Claw Dragons
THE DARK REALM, Land of Shadows

The great Shadowrealm is one of the darkest places in the Realms - though, contrary to popular belief, it is not necessarily evil. All animals found within this Realm are created and sustained by dark energy manifested by the world itself, rendering it all but uninhabitable for any but shadowbeasts. Such energy is so powerful in the Realm that it flakes away from the ground and spins off into the air, disintegrating as it flies skyward.

The sky is a deep shade of golds and reds, and the sun an otherworldly glowing maroon. There are no stars, though the night sky dims to a red-black, instead of blacking out completely. Buildings in this Realm, except for the four treasure-bearing Towers, can be formed and collapsed with shadow magic. The Realm is led by an overbearing group of Olath called the Council of Seven. 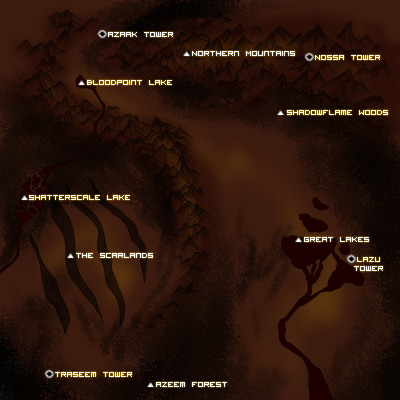 These are the cities found within this area; each one is marked on the map, and divided by tiers. The larger the tier, the larger the city - tier one may be a small village or town, while tier four may be sprawling cities of grand proportions. In the Shadowrealm, all cities are built as Towers, and are called thus.

APPEARANCE: A towering structure shaped much like a massive obelisk. From the secluded plain it stands upon, it towers high into the clouds, its topmost point obscured within the swirling yellow-black clouds whirling slowly about it. The tower itself is darkest obsidian, eerily lit with a dark, eldritch blue glow and curling lines that shimmer faintly with the same color. A few sharp spires surround its base, and its gate stands tall, daring anybody to enter.

RACE: none. LEADER: Council of Seven. TIER: none.
LANGUAGE(S): Common. ALLEGIANCE: None.

APPEARANCE: Secluded deep in the Northern Mountains, Nossa Tower is surrounded by a jagged bulwark of carved stone, sculpted from the mountains themselves. The tower itself rises, gateless, from the mountains as if erupting from beneath the surface. Seven smaller towers conjoin the mighty central keep, which rises, replete with sharp crenelations and narrow, shadowed windows, and is crowned with a broad, circular platform with seven sharp spires atop it. Entry to this tower is gained through the caverns below, within the mountains.

APPEARANCE: A sprawling collection of smaller towers and spires surround the base of Lazu Tower. The closest of these smaller towers have walkways connecting to the main tower itself. These walkways are the only entrances. The main tower itself looks like a series of progressively taller fortresses conjoined to one another, ending with the tallest, central tower which is surrounded by the shorter sections.

APPEARANCE: Shortest of the towers, Traseem Tower sits on a rise overlooking the Scarlands. As if to ward off that grim landscape, a massive bulwark faces outward, defying any to attempt to gain access. Behind that mighty stronghold rises the tower. Traseem is a three-tiered citadel, with each successive layer growing steadily smaller. Entryways are few, and each is heavily fortified.

Similar to the Shadowflame Woods, Azeem Forest is filled with blackened trees with gnarled trunks. However, its leaves come in a myriad of grey shades, red, and dark yellow which cast the forest floor into deep shadows. Many shadowy creatures form, scurry about, and vanish, lending a sense of frenetic activity to the forest.

Fed by an underground spring, the water in this lake has a dark red hue to it. Shadowy streamers of energy erupt from beneath the lazily bubbling surface to fly skyward and disappear, more than most places in the Realm. Despite its appearance, the water is cool to the touch.

A large collection of deep, quiet lakes. The dark waters hide whatever may be lurking beneath the watery surface. Occasionally, something unseen will disturb the waters, and ripples and bubbles will appear, only to die back down after a moment.

A vast range of dark mountains. Labyrinthine passes, valleys, and caverns run throughout the range, casting much of the area into deep shadows. Deep within the mountains stands Nossa Tower, home of the Council of Seven. Smaller shadowbeasts guard its unfathomable innards, guided by the Council; they act as the eyes and ears of the Tower Nossa, and all within the northern Realm is known quite quickly.

A wasteland of corrupted devastation, where four massive chasms scar the land, as if ripped by giant claws. No plantlife grows and no animals live in this horrible place; one who can see and sense energy would notice a darkness unlike the rest of the Realm, evidence of some horribly cataclysmic event still infused with chaotic aura that makes the land completely uninhabitable. Half-visible figures of wraithlike beasts can be seen, said to be the frantic ghosts of those who've died in the Scarlands, at multiple points in the day. Locals carry a tale of a massive shadowbeast, an Olath who had been the Ether, losing his mind and loosing his power over the land. Whether or not this is true has yet to be proven - though many will tell that if you approach such lands unwarded, you will die.

The trees in this forest look like they've been charred, but they are in fact alive and well. Gnarled black trunks fill the forest, topped with yellow-black leaves appear to be burning, casting an eerie light throughout the forest. The roots of the trees intertwine, and the concentrated darkness causes the drifting-shadow effect prevalent throughout the realm to increase.

Once the brightest lake in the Realm, filled with shimmering, cool water, the Shatterscale is now a series of small, broken ponds of a deep, disgusting black. The water is poisonous to consume or touch, polluted by the same chaotic aura that corrupted the Scarlands many years ago. Few shadowbeasts come to its deadly shores, and those who do inevitably lose their minds to madness.


About the Light and Dark Realms

The Light and Dark Realms are the most ancient of all Realms, and are a centerpoint for both the creation of new Realms as well as the balance within the Void hydra in which they exist. It's theorized that other Dark and Light Realms exist within all Voids, contributing to the balance of each - and that they are somehow pivotal to these hydras' survival. When a Realm is created, its essence first passes through both Light and Dark, gifted balance from each and the ability to exist in the Void it is birthed into. No Dark nor Light Realms have Markers, and exist deep within the hydra itself. Despite this, portal travel to them is still possible, and is thought to be a result of a Core that acts like a giant Marker in itself.