Space, Stars, the Suns, and Moons

Said to be bound in starlight with enchanted pages, this book holds information about space, stars, the suns, and the moons of our Realm Spheres.

Space is a strange and complex combination of unbound energy and chaotic reiatsu, as well as vast expanses of unexplained and inexplicable ‘nothingness’ both near the Realms and outside of their borders. The Nothing upon which Void hydras and First Beings walk is not actually nothing, but it is a type of energy that cannot be controlled or manipulated by regular living beings, immortal or otherwise. Some scholars believe that not even the gods, split as they are, truly know what it is or how it came to be. 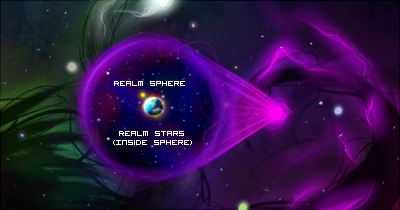 Realms are surrounded by a spherical globe of space that is enclosed within a shield of energy, generally invisible from within, called the Veil, which separates the Realm from the Nothing outside. The Markers within a Realm’s world give energy to the Veil, upon which the Void hydra grasps; without the Markers, the Veil would fail and evaporate, leaving the Realm to be destroyed by the Void’s chaotic energy.

The energy inside the Spheres differs between all Realms, and each is generally unique. At the center of each Realm Sphere, there is the world of that Realm itself - as well as its related suns and moons. The planet is known to be stationary within the Sphere, and the suns and moons (which are much smaller than the world at the center of the Realm) orbit around it. 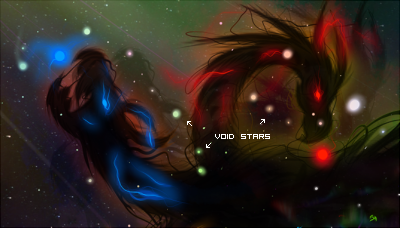 Stars are divided into three distinct categories, depending on where they are located and what they are composed of. All stars are made of energy - usually reiatsu that is akin to the element of Light, though understood to not be the same. Star types are:

Scholars have just begun to discover that they may track the movements of other Void hydras through their Void Stars, as well as the Veil-shielded balls of light that are the Realm Spheres, though the latter may sometimes be hidden from view. On some Void hydras, the energy connecting the Realms to the hydra’s head or tail can be seen in bright flashes and flares of color, moreso if a hydra is younger.

Suns and moons are composed of reiatsu, where suns are bright and made of lightfire, and moons are made of solid, shimmering reiatsu somewhat akin to Soulgems in nature.

Moons in the Realms, being solidified reiatsu, do not naturally have traditional moon phases; phases are dictated by the gods of each Realm, and often have set patterns they follow per Realm, per moon. This effect is known as the 'god's breath', and very rarely may be altered by the gods of the cosmos to relay messages to the mortals below that they govern.

Each moon is an opaque orb of colored reiatsu; within is a hollow space filled with energy in constant motion. As the fastest energy moves just beneath the moon's glassy surface, it emits light that differs in brightness per moon and Realm. Often, the moons will be a bright, pale color, and white or silver is the most common. It should be noted that Kurai's moon is not actually a moon, but a corrupted sun, and therefore has no phases.

Phases often differ per Realm; this is a chart that shows the current moon phase schedule for each world.

Evylon
1 moon
Lue
Lue's phases are chaotic and cannot be charted; the phase differs from night to night, often changing visibly as it moves across the sky.
Felnova
1 moon
Moon
The Moon of Felnova follows a monthly phase chart that almost never changes. The full moon always lands around mid-month, with the new moon falling around the first.
Kurai
N/A
Chi'mun
Chi'mun is not actually a moon, and therefore has no phases.
Lizzarkyth
3 moons
Drii'avk Mu'aak
Called the Divine Moon, Drii'avk Mu'aak's phases are the most normal, much like Felnova's - it follows a monthly calendar. However, unlike Felnova's Moon, the full moon often falls around the first of the month, where the new moon is often mid-month.
Zalk Mu'aak
Called the Middle Moon, Zalk Mu'aak has a very slow phasing schedule, and only has a full moon once every two years. The first of an odd year sees Zalk's full light, while the first of an even year sees a new moon, an invisible disc in the sky.
Mu'aak'u Vuye
Called the Moon of Change for many reasons. Mu'aak'u Vuye is the green moon that cannot be charted; it may stay full for months and suddenly begin changing, or may follow a normal course before suddenly stopping at a crescent or new phase.
Millirand
2 moons
I’zyk Lunari
Called the Moon of Ice. I’zyk Lunari follows a normal phase schedule nearly identical to Felnova's, with the new moon often falling around the first of the month. However, I'zyk never fully waxes, much like Fyraen never completely disappears.
Fyraen Lunari
Called the Moon of Fire. Fyraen Lunari follows a normal phase schedule nearly identical to Lizzarkyth's Drii'avk Mu'aak, with the new moon often falling around the first of the month. However, Fyraen never fully has a new moon, much like I'zyk never completely waxes full.
Noctis
3 moons
Rhui
The smallest of Noctis' moons has no phases whatsoever, and always appears full in the sky. However, it also travels through the Realm's Sphere faster than the other moons, and may hide behind them, or appear in broad daylight.
Tifa
Tifa is the golden twin to Kali, and follows a set chart a solid year long. Usually, Tifa shines the brightest during the summer, and disappears completely during the winter.
Kali
Kali is the slowest of Noctis' moons, and has a variable phase schedule that is difficult to chart. Currently, it takes this moon a full two years to wax full.
Ristell
5 moons
Moon of Dancing Light
The Moon of Dancing Light has the shortest chart of any moon, and waxes full and wanes to new during a single rotation around the planet. Its phases may have a pulsing quality to them of varying degrees of brightness.
Moon that Sings
The Moon that Sings orbits the Moon of Dancing Light, and has a similar, but much slower, phase schedule - it waxes full some time mid-week, though never seems to wane completely away; it may disappear behind the Moon of Dancing Light, or cover Light completely.
Eye of the Pharaoh
The Eye of the Pharaoh does not have set phases; it remains full most nights, but will wane to new for days if Nirni is displeased, or there is some form of danger. There are scholars in the iahake that theorize if the goddess of the moon ever abandons Ristell, this particular moon would remain as a link between her and her people, an eye to watch from anywhere, at any time.
Moon of Many Faces
The Moon of Many Faces does not have a complete phase schedule, and cannot be charted. Nobody knows what dictates the phases, or how many may visit the Realm in a particular month; however, full moons seem to appear more often in the summertime, and less often in the winter.
Moon that Never Sets
The Moon that Never Sets is always full, always shining, and sits in a static position in the sky at all times.
Xaeri
1 moon
Lu
Lu, Xaeri's only moon, has no phases and appears full at all times. It is a blue color, and is among the brightest of all moons, emitting a bright blue light as it passes through the heavens.
Written/Told by: Galazair, old strigine scholar
Contributed by: Verridith

Return to the Library